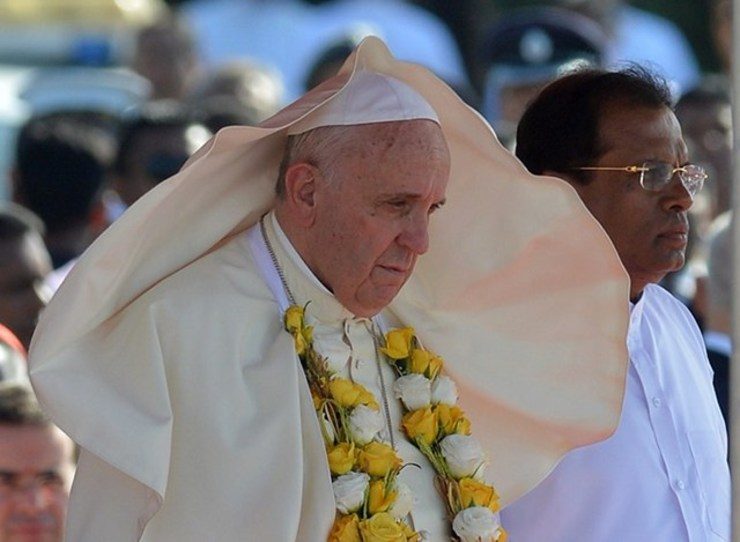 Facebook Twitter Copy URL
Copied
In his first speech in Sri Lanka, Pope Francis tells the island nation: 'The process of healing also needs to include the pursuit of truth'

COLOMBO, Sri Lanka (UPDATED) – Pope Francis urged respect for human rights in Sri Lanka as he began a two-nation Asia tour on the island Tuesday, bearing a message of peace and reconciliation after a long civil war.

His visit, days after the surprise election of a new president, will focus on unity in a country still struggling to heal the wounds of a decades-long civil war that pitted government troops against Tamil separatist rebels.

The Argentine pope’s second visit to Asia will also take in the Philippines, a bastion of Christianity in the region, where he is set to attract one of the biggest gatherings ever for a head of the Catholic Church. 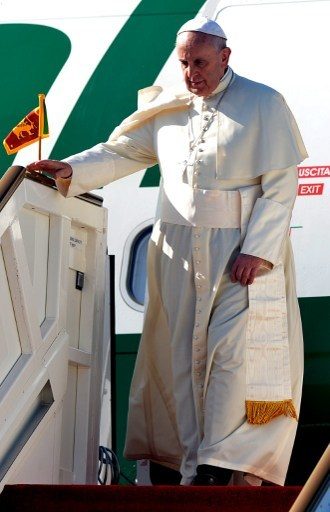 But in mostly Buddhist Sri Lanka, which has seen a rise in religious violence in recent years, he will focus on the role of the Church in a diverse society.

“The great work of rebuilding must embrace improving infrastructures and meeting material needs, but also, and even more importantly, promoting human dignity, respect for human rights, and the full inclusion of each member of society,” said the pope. (Read the full text of the pope’s arrival speech here.)

Francis said Sri Lanka’s diversity is an asset, not a threat to rebuilding.

“Most importantly, all must respect one another, respect diversity, and live as one family. When people listen, they share values.”

Human rights are a hugely contentious issue in Sri Lanka, which has alienated the international community by refusing to cooperate with a UN-mandated investigation into alleged wartime killings of civilians.

“The process of healing also needs to include the pursuit of truth,” said the pope, who was greeted at Colombo’s main airport by the country’s new President Maithripala Sirisena.

Sirisena, who took office only days ago, has promised an independent domestic inquiry into the allegations of wartime rights abuses under his predecessor Mahinda Rajapaksa.

Only around 6% of the country’s 20-million-strong population is Catholic, but the religion is seen as a unifying force because it includes people from both the majority Sinhalese and minority Tamil ethnic groups. (READ: FAST FACTS: Pope Francis in Sri Lanka)

Sirisena has pledged to protect religious freedoms and promised a new culture of tolerance on the island, which was devastated by a 37-year ethnic conflict that ended in 2009.

“All members of society must work together; all must have a voice,” said the pope, who was greeted by flag-waving well-wishers including a group of Muslim schoolgirls.

The Italian and Spanish speaking Argentine pope delivered his speech in English, a language he has been practicing to communicate with Asians.

On Wednesday, the pope will hold a public mass on the seafront that is expected to attract around one million people during which he will canonize Sri Lanka’s first saint, a 17th century missionary.

He will also visit a small church in the jungle that was on the front line of the ethnic conflict, which killed around 100,000 people. The region holds a special interest for Pope Francis, who as a young priest considered becoming a missionary in Japan. (READ: Pope of the fringes: Francis as pilgrim-diplomat)

On Thursday, he will fly on to the Philippines, where anticipation has been building for months, with the pope dominating the media and sparking a merchandise frenzy.

The Philippines is one of the Church’s modern success stories, counting roughly 80% of the former Spanish colony’s 100 million people as Catholics, which has helped to offset waning influence in Europe and the United States.

He will meet survivors of Super Typhoon Yolanda (Haiyan), which claimed 7,350 lives when it destroyed entire farming and fishing communities in 2013.

The pope will celebrate mass with tens of thousands of survivors at the airport in Tacloban, one of the worst-hit cities.

Security will be a major issue throughout the pontiff’s Asia trip.

In Sri Lanka, religious violence has risen in recent years, with attacks on mosques and some churches by nationalist Buddhist groups who say minorities have undue influence on the island.

The army said troops had been placed on stand-by, although police will be taking the lead in a country where a military presence remains sensitive.

Emergency medical units were being placed along the route from the airport to the city center, which is expected to be lined with well-wishers.

Francis is the first pope to visit the country since John Paul II two decades ago. Buddhist monks boycotted his visit over controversial remarks John Paul made in his book “Crossing the Threshold of Hope.” – Rappler.com