Facebook Twitter Copy URL
Copied
'What is needed now is healing and unity, not further conflict and division,' Pope Francis tells Buddhist, Hindu, and Muslim leaders as he calls for cooperation in post-war Sri Lanka

COLOMBO, Sri Lanka – Pope Francis on Tuesday, January 13, called on Sri Lanka’s religious leaders to work together for post-war reconciliation on the island, where bitter ethnic and religious divisions persist.

The pope said religious beliefs should never be a cause for violence – echoing his criticism on Monday of “deviant forms of religion” following deadly attacks by Islamist militants in France.

“What is needed now is healing and unity, not further conflict and division,” he told Buddhist, Hindu and Muslim leaders during a meeting in Sri Lanka’s capital, saying his thoughts were with the families of the victims of the country’s 37-year civil war.

“May the growing spirit of cooperation between the leaders of the various religious communities find expression in a commitment to put reconciliation among all Sri Lankans at the heart of every effort to renew society and its institutions.”

Siva Sri Mahadeva, a Hindu priest, placed a yellow shawl around the pope’s shoulders, which he wore for the duration of the meeting. 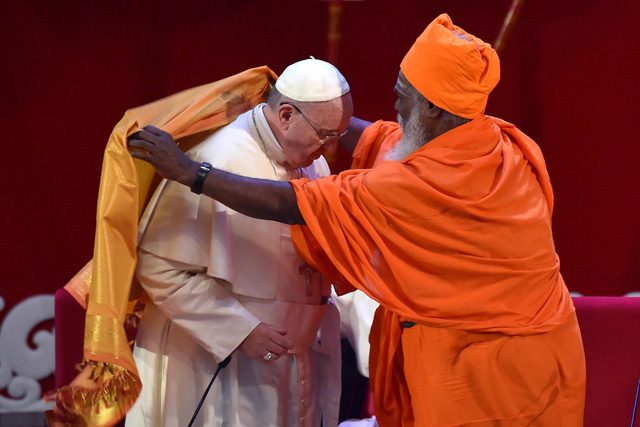 Sri Lanka is still dealing with the legacy of a long civil war that pitted its two largest ethnic groups against each other.

Religious violence has also risen in recent years in the mainly Buddhist country, which has significant Hindu, Muslim and Christian minorities.

Nationalist Buddhist groups who say minorities have undue influence on the island have attacked mosques and some churches.

“For the sake of peace, religious beliefs must never be allowed to be abused in the cause of violence and war,” the pope said.

Only around 6% of the 20-million-strong population is Catholic, but the religion is seen as a unifying force because it includes people from both the majority Sinhalese and minority Tamil ethnic groups.

The pope’s visit comes days after the election of new President Maithripala Sirisena, who has pledged to protect religious freedoms and promised a new culture of tolerance on the island. 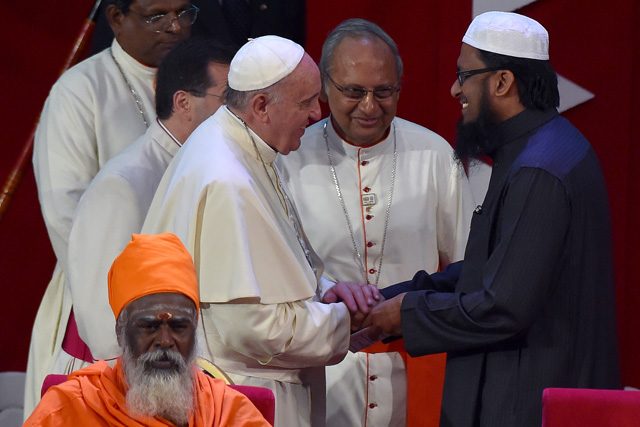