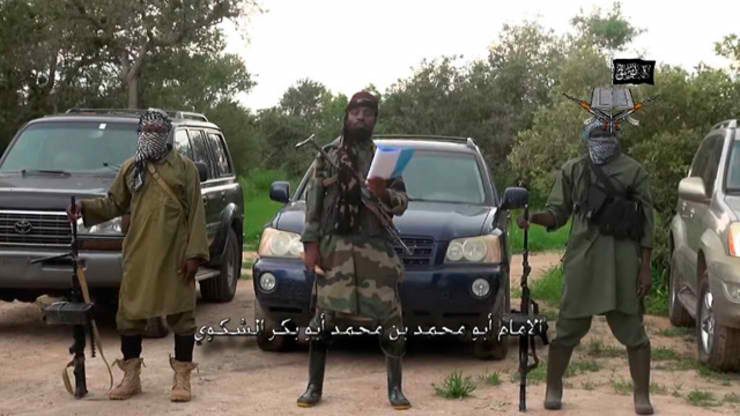 MAIDUGURI, Nigeria (UPDATED) – Boko Haram fighters on Sunday, January 25, overran a strategic town in northeastern Nigeria and seized a military base, as Secretary of State John Kerry pledged further US support against the militants.

The Islamists captured the town of Monguno in Borno State, which lies about 125 kilometers (80 miles) north of the state capital Maiduguri, which was targeted in a simultaneous dawn raid.

“We fought them all night long but they took over the town, including the military barracks there.”

The military in Abuja said that “scores” of Boko Haram fighters were killed as troops restored order in Maiduguri and Konduga, some 40 km away.

But on Monguno, defense spokesman Chris Olukolade said an air campaign was being mounted as “troops had to retreat from the location” after the commander and soldiers were injured.

With closely-watched elections in Nigeria less than a month away, top US diplomat Kerry jetted into the financial capital Lagos for meetings with President Goodluck Jonathan and his main opposition rival Muhammadu Buhari.

Kerry’s whistlestop visit came amid fears of a repeat of election-related violence which in 2011 left some 1,000 people dead.

Security has dominated the build-up to the February 14 presidential and parliamentary vote, as Boko Haram has intensified its attacks.

Nigeria is currently scrambling for a solution to the problem of how to allow hundreds of thousands of people displaced by the violence to vote, which has led to calls for a delay.

There have also been sporadic tit-for-tat attacks by supporters of Jonathan’s Peoples Democratic Party (PDP) and those of Buhari’s All Progressives Congress (APC).

Jonathan said he had told Kerry that his government would “provide all the resources that are required by the Independent National Electoral Commission to ensure that the election goes smoothly”.

Kerry said it was “absolutely critical” that Nigeria had free, fair and timely elections and that the world was “paying very close attention” to developments in Africa’s most populous nation.

More than 13,000 people have been killed and more than one million made homeless by Boko Haram violence since 2009.

Kerry said Washington was “prepared to do more” to help Nigeria, which has west Africa’s largest military but has been criticized for failing to protect lives and property.

The United States has been sharing intelligence with the Nigerians and was involved in the multi-national effort to find 219 schoolgirls kidnapped by Boko Haram in April last year.

“Bottom line, we want to do more and that was part of the message to both President Jonathan and General Buhari today,” Kerry added.

“We are prepared to do more but our ability to do more will depend to some degree on the full measure of credibility and accountability and transparency and peacefulness of these elections.”

Boko Haram has twice before tried to take over Monguno and its fall was potentially significant, as it removes the last military base before Maiduguri from the northeast.

“On the other hand, it may be more of Boko Haram overrunning the base with the intention of seizing as much weaponry as possible, amid concerns of a possible regional counter-insurgency operation,” said Ryan Cummings, of risk consultants Red 24.

The renewed violence underscored the extent of the difficulties facing Nigeria as the election approaches and also the increasing threat Boko Haram poses for the country’s neighbors.

Last week, Nigeria, Niger, Chad and Cameroon met to discuss the creation of a new multi-national force while troops from Chad deployed to Cameroon to help repel attacks there.

The group’s leader Abubakar Shekau last week dismissed the initiative, saying: “Kings of Africa, you are late. I challenge you to attack me even now. I’m ready.”

Boko Haram, which the US has declared an international terrorist organization, has until recently been seen as a largely localized group.

The militants want to create a hardline Islamic state in northeast Nigeria and have been capturing towns and villages for the last six months, declaring some part of a caliphate.

Jonathan said he “reaffirmed (Nigeria’s) strong commitment to working with the United States to put an end to global terrorism and particularly Boko Haram”.

Nigeria was also “strongly committed” to the proposed new regional force, he added.

But Kerry warned that action needed to be taken, with so-called Islamic State militants in Syria and Iraq trying to extend their reach into parts of north Africa.

“It is obviously a concern that they try more aggressively to try to spread to countries of… other parts of Africa,” he said. – With Nicolas Revise in Lagos, Agence France-Presse/Rappler.com