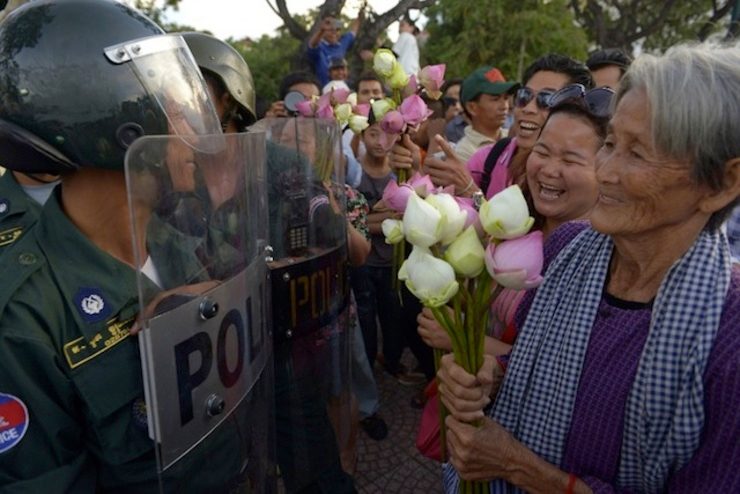 Facebook Twitter Copy URL
Copied
The tearful campaigners, wearing orange prison uniforms, repeatedly shouted 'very unjust' in Khmer as they were led out of the courtroom

PHNOM PENH, Cambodia – A Cambodian court on Monday upheld convictions for 11 land activists involved in protests last year while marginally reducing most of their sentences, as rights groups decried the latest strike against freedom of expression.

In November, 10 female activists – including a 75-year-old woman – and a defrocked Buddhist monk were each sentenced to a year in prison for blocking traffic or obstructing the work of officials during protests in Phnom Penh.

Cambodia’s Appeal Court upheld the guilty verdicts but reduced 8 of the activists’ jail terms to 10 months while the sentence for the eldest campaigner – Nget Khun, known locally as “Mommy” – was cut to 6 months.

The one-year sentences for prominent rights activist Tep Vanny and the monk were upheld.

“They are housewives and mothers who need to take care of their children, so receive some reduction (to their sentences),” Judge Nguon Im told the court.

The tearful campaigners, wearing orange prison uniforms, repeatedly shouted “very unjust” in Khmer as they were led out of the courtroom.

Most of the activists are from the few dozen families remaining in the capital’s Boeung Kak neighborhood – an area from which about 4,000 families were forcibly evicted to make way for a real-estate development.

Seven of the women had been protesting against flooding in the area when they were arrested, with the other four activists sentenced over later demonstrations for their release.

Rights groups criticized the court’s decision as an attempt to stifle legitimate protest.

“It is a signal to other activists who dare to struggle for freedom of expression” that they will also face jail, Sopheap Chak, executive director of the Cambodian Center for Human Rights, told Agence France-Presse.

Andrea Giorgetta from the International Federation for Human Rights also lambasted the ruling, describing it as “ludicrous and the foregone conclusion of an ugly trial”.

“It is the latest example of the Cambodian government’s repression of human rights defenders and political use of the courts,” he said.

Land evictions are one of the foremost human rights issues in Cambodia today, with residents’ claims over land routinely ignored and villagers protesting against evictions frequently met with violent crackdowns by authorities.

The communist Khmer Rouge abolished land ownership during its 1975-1979 rule and many legal documents were lost during the period, complicating land claims today.