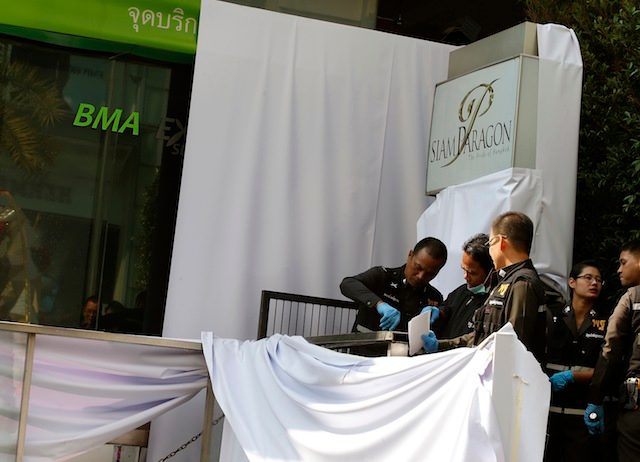 Facebook Twitter Copy URL
Copied
Authorities decline to speculate whether the small bombs – which caused minor injuries to two passers-by when they exploded near the downtown Paragon mall on Sunday evening, February 1 – are linked to the nation's turbulent politics

Authorities declined to speculate whether the small bombs – which caused minor injuries to two passers-by when they exploded near the downtown Paragon mall on Sunday evening, February 1 – were linked to the nation’s turbulent politics.

“We will strictly enforce security across the country. We need to have high security checks in some areas,” he told reporters.

“We can’t say who is behind this… it could be people who have bad intentions, or are linked to politics or people who think differently,” he added, without elaborating.

A team of forensic police on Monday sifted through the debris created by the blasts, which struck at around 8 pm local time (1300 GMT) on Sunday on a walkway leading to the busy Paragon shopping centre.

“They did not aim to cause major damage… they were used to create trouble,” he added.

Thailand has been under martial law since the coup toppled the elected government last year, despite growing calls from rights groups and the international community for the junta to rescind the draconian law.

Political gatherings and criticism of the coup are forbidden under the law, with the junta responding aggressively to any form of protest.

Martial law also allows civilians to be tried in military courts, with verdicts not subject to appeal.

Thailand has endured nearly a decade of political turmoil since billionaire former premier Thaksin Shinawatra rattled the establishment by winning elections with his populist politics.

Parties led by Thaksin, his family or affiliates have won every election since 2001, in the process facing two coups and the disposal of three premiers by Thailand’s interventionist courts.

Thaksin’s younger sister Yingluck was toppled by a court shortly before the coup and was last month banned from politics by the junta-stacked National Legislative Assembly over a costly rice subsidy scheme.

She now faces criminal charges and a possible jail term linked to the populist policy.

Supporters of the Shinawatras have largely been silenced by martial law, and have not mobilized in defense of a toppled administration they elected in a 2011 election landslide. – Rappler.com