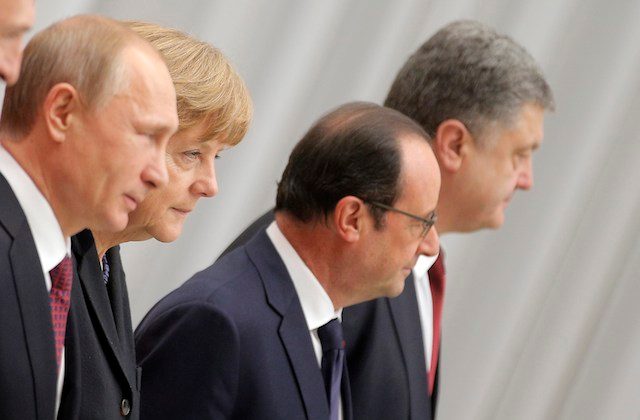 Putin said a ceasefire would take effect on Sunday, February 15, and that heavy weapons would be withdrawn from frontlines of the conflict, which has already killed at least 5,300 people and driven a million people from their homes.

Hollande went further, saying there was agreement on “a comprehensive political solution.” The French leader said there was “serious hope, even if all is not done”.

However, Merkel spoke only of a “glimmer of hope”.

The truce – meant to ease a crisis that has plunged the West and Russia into their bitterest dispute since the Cold War – was signed by the so-called “contact group”.

This comprises the pro-Russian separatist leaders, Russian and Ukrainian envoys, and European mediators from the OSCE.

The latest talks were seen as a last opportunity for European leaders to save nearly bankrupt Ukraine from ever-widening defeats at the hands of rebels said by Kiev and the West to be armed and trained by Russia.

Even as the deal was agreed, Kiev and rebel sources said fighting over the last 24 hours had killed 14 civilians and two Ukrainian soldiers.

The Ukrainian government also accused Russia of deploying another 50 tanks across the border overnight.

“I don’t believe in it at all,” said Lyubov, 62, who would not give her last name. “Every time they sign an agreement, they say one thing and do another. I no longer trust anyone.”

“I hope that this will be a real ceasefire,” said Olena Ivachova, 30, who lives in the heavily damaged Donetsk neighborhood of Tekstilnik.

Beset by war and corruption, Ukraine’s pro-Western government is struggling to enact legal and economic reforms that would help steer the former Soviet republic out of Russia’s sphere of influence and into Western institutions.

The Kiev government got a major boost Thursday with the announcement by IMF chief Christine Lagarde of a new financial rescue plan worth $17.5 billion.

In total, Ukraine will receive $40 billion (35 billion euros) in assistance over four years coupled with bilateral loans from other sources, Lagarde said, helping to stabilize Kiev’s finances after 10 months of conflict in the east.

The fate of Ukraine, however, may be decided on battlefields in the east, where heavily armed rebels have recently made big gains against outgunned government forces.

Russian news agencies said the new heavy weapons-free zone will be 50 to 70 km (31-43 miles) wide, double the width of the buffer zone agreed to in the failed September truce.

There was no immediate information on another key sticking point – control over the approximately 400 km (250 mile) stretch of Russia’s border with rebel-held Ukraine.

That sector is entirely under Russian and pro-Russian rebel control and is used, according to Kiev, as a conduit for separatist supplies. The Kremlin denies this but has opposed Ukraine being allowed to regain control of the frontier.

There was also deep disagreement ahead of the Minsk talks over the size of the territory the rebels will control, given that they have made considerable gains in recent weeks.

Moscow is also pushing for the separatist-held territories to be granted a large degree of autonomy, but Kiev only says that it is willing to decentralize some powers.

Poroshenko warned before the talks that he would introduce martial law throughout the country if they fail to stop the war.

An exhausted Poroshenko was scheduled to brief a European Union summit in Brussels on Thursday.

European Union foreign policy chief Federica Mogherini had said the talks would be a “turning point for good or bad”. The European Union has imposed heavy economic sanctions on Russia but is divided over whether it should ramp up the measures.

US President Barack Obama, meanwhile, warned that a collapse in the peace process could push Washington into approving deliveries of weapons to Ukraine, a step many European leaders oppose for fear of getting drawn into open conflict with Russia.

The bloodletting in eastern Ukraine has been relentless in recent weeks as the rebels have pushed deeper into government-held territory and Kiev forces have counter-attacked.

As the leaders converged on Minsk, fighting raged on the ground with both sides trying to strengthen their hand at the negotiating table.

Insurgents have been battling for weeks to take the rail hub of Debaltseve, while Ukrainian forces on Tuesday, February 10, captured ground around the port city of Mariupol.  – With Nicolas Miletitch in Donetsk, Ukraine, Agence France-Presse/Rappler.com