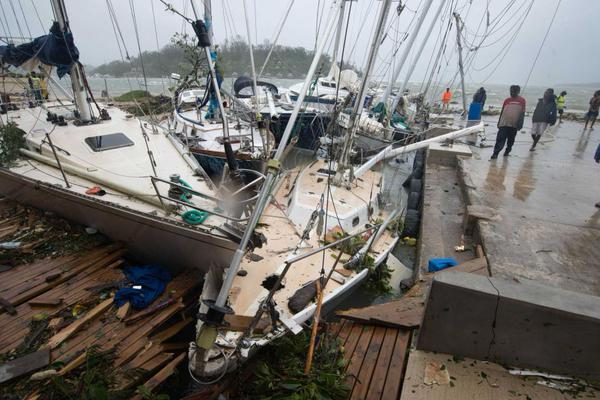 Facebook Twitter Copy URL
Copied
Though the full extent of the damage is unknown, UN officials say damage is worse than what was expected

SUVA, Fiji – A terrifying tropical cyclone which smashed into Vanuatu in the South Pacific wreaked widespread devastation, aid agencies said Saturday, raising fears that dozens may have died in what may be one of the region’s worst weather disasters.

The full extent of the damage is unknown, with limited communications in place after Super Cyclone Pam, a maximum category five storm, slammed directly into the island country late Friday with gusts up to 320 kilometres (200 miles) an hour.

The UN had unconfirmed reports of 44 people killed in one province, and said late Saturday that there was no clear number of deaths or injuries but that the impact of the cyclone had been “catastrophic”.

“A disaster of this magnitude has not been experienced by Vanuatu in recent history — particularly in terms of the reach of the potential damage and the ferocity of the storm,” said Sune Gudnitz, who heads the United Nations Office for the Coordination of Humanitarian Affairs (OCHA) in the Pacific.

Aid agencies were scrambling for information and preparing to send teams to Vanuatu — with a UN disaster assessment and coordination team expected to arrive late Sunday.

“While it is too early to say for certain, early reports are indicating that this weather disaster could potentially be one of the worst in Pacific history,” UNICEF New Zealand’s executive director Vivien Maidaborn said in a statement.

“The sheer force of the storm combined with communities just not set up to withstand it, could have devastating results for thousands across the region.”

Aurelia Balpe, head of the Pacific regional office of the International Federation of Red Cross and Red Crescent Societies (IFRC), said there were unconfirmed reports of casualties in the capital Port Vila.

But they had greater fears for outlying southern islands, home to more than 33,000 people, where communication had been cut.

“We are starting to get a picture from Port Vila, but there’s nothing from the south,” she told AFP from Suva.

Residents of Port Vila spent the night hunkering down as the terrifying storm raged, waking to find trees had been uprooted, homes destroyed and areas flooded.

“The scene here this morning is complete devastation — houses are destroyed, trees are down, roads are blocked and people are wandering the streets looking for help,” said Save the Children’s Tom Skirrow.

UNICEF spokeswoman Alice Clements described the cyclone as “15-30 minutes of absolute terror” for “everybody in this country” as it passed over.

Care International’s Charlie Damon added: “Homes have been blown to pieces, and even evacuation shelters, where people had sought refuge, have been flooded and left exposed to Cyclone Pam.

“If this is the level of impact in communities where emergency shelters were an option, we are deeply concerned about what has happened in remote communities without them.”

The storm crossed the main Vanuatu island, home to more than 65,000 people, and a group of islands further south where 33,000 live after affecting the Solomon Islands and Tuvalu, where there were no reports of fatalities.

Aid agencies have launched appeals and are hoping to start flying in emergency supplies of food, shelter and medicine from Sunday, when the airport in Port Vila is expected to reopen.

United Nations chief Ban Ki-moon, speaking from Japan, said while the impact was not yet clear “we fear the destruction and damage would be widespread”, as he offered his deepest condolences to the people of Vanuatu.

Fiji Weather Service meteorologist Neville Koop said the cyclone was weakening as it slowly moved away from Vanuatu, and would pass between Fiji and New Caledonia before brushing the North Island of New Zealand on Monday.

Koop said that Pam was not the strongest storm ever to hit the South Pacific — Tropical Cyclone Zoe, which hit in 2002, was stronger — but that it was packing gusts of 320 kilometres per hour and sustained winds of 250 kilometres per hour. – Rappler.com