Facebook Twitter Copy URL
Copied
(UPDATED) Lee Kuan Yew, one of the towering figures of post-colonial Asian politics, is widely credited with transforming Singapore into one of Asia's wealthiest economies

SINGAPORE (3rd UPDATE) – Singapore plunged into mourning and world leaders united in tribute Monday, March 23, after the death of Lee Kuan Yew, the iron-fisted politician who forged a prosperous city-state out of unpromising beginnings.

His son, Prime Minister Lee Hsien Loong, issued a statement before dawn announcing the passing of his 91-year-old father at the Singapore General Hospital following a long illness.

He declared 7 days of national mourning until the former leader is cremated on March 29.

“He fought for our independence, built a nation where there was none, and made us proud to be Singaporeans. We won’t see another like him,” the prime minister said in an emotional televised address.

Onlookers chanted “Mr Lee, Mr Lee” as a white hearse carrying his remains entered the Istana state complex at midday for a two-day private family wake before lying in state at Parliament House.

At the entrance, Singaporeans, some teary-eyed, left personal tributes and signed a condolence board.

US President Barack Obama led world leaders in hailing Lee, who turned a small territory lacking its own natural resources into a world player in finance, trading and shipping – all the while with a heavy political grip that was long decried by rights campaigners.

“He was a true giant of history who will be remembered for generations to come as the father of modern Singapore and as one of the great strategists of Asian affairs,” Obama said in a statement.

China lauded Lee’s “historic contributions” to their relationship after the Communist leadership embarked on dramatic economic reforms from 1978.

President Xi Jinping said Lee was “widely respected by the international community as a strategist and a statesman”.

Tributes also came in from a host of international leaders including UN Secretary-General Ban Ki-moon and the prime ministers of Malaysia, Britain, Japan and Australia.

Lee, whose health rapidly deteriorated after his wife of 63 years, Kwa Geok Choo, died in 2010, was in hospital for nearly seven weeks with severe pneumonia.

Two years before he died, Lee revealed that he had signed an advance medical directive instructing doctors not to use any life-sustaining treatment if he could not be resuscitated.

He served as prime minister from 1959, when colonial ruler Britain granted self-rule, to 1990, leading Singapore to independence in 1965 after a brief and stormy union with Malaysia.

Singapore now has one of the world’s highest per capita incomes and its residents enjoy near-universal home ownership, low crime rates and first-class infrastructure.

The opposition Workers’ Party, whose leaders were among those harried for years by Lee under his authoritarian rule, joined the rest of the nation of 5.5 million people in mourning him.

“His contributions to Singapore will be remembered for generations to come,” it said in a statement. 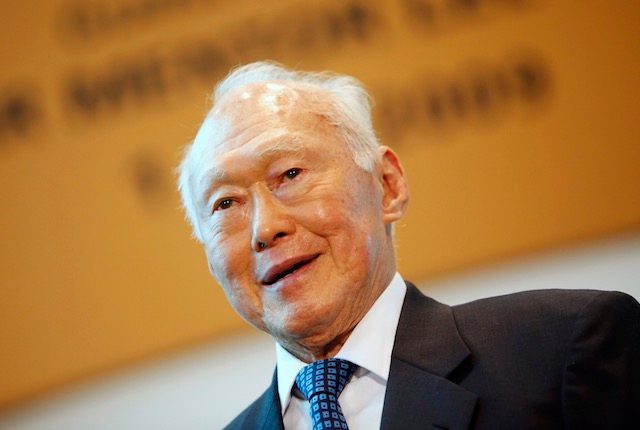 On the diplomatic front, Lee’s counsel was often sought by Western leaders, particularly on China – which he identified early as a driver of world economic growth – as well as more volatile neighbors in Southeast Asia.

But the Cambridge-educated lawyer was also criticized for jailing political opponents and driving his critics to self-imposed exile or financial ruin as a result of costly libel suits.

Singapore strictly controls freedom of speech and assembly. While it has become more liberal in recent years, it still uses corporal punishment and ranks 150th in the annual press freedom ranking of Reporters Without Borders – below Russia and Zimbabwe among others.

He said it may now be time for a national “conversation” on greater political liberalization.

Lee stepped down in 1990 in favor of his deputy Goh Chok Tong, who in turn handed the reins to the former leader’s eldest son Lee Hsien Loong in 2004.

The People’s Action Party (PAP), which was co-founded by the elder Lee, has won every election since 1959 and currently holds 80 of the 87 seats in parliament.

Lee retired from advisory roles in government in 2011 after the PAP suffered its worst poll result since it came to power, getting only 60 percent of votes cast amid public anger over a large influx of immigrants, the rising cost of living, urban congestion and insufficient supply of public housing.

In his last book One Man’s View of the World, published in 2013, Lee looked back at his remarkable career and concluded: “As for me, I have done what I had wanted to, to the best of my ability. I am satisfied.” – Martin Abbugao, AFP / Rappler.com