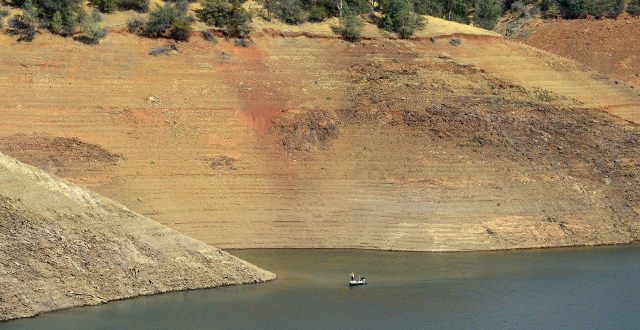 Governor Jerry Brown issued the declaration at a press conference in a parched, brown slope of the Sierra Nevada mountains that would normally be covered by deep snow.

“Today, we are standing on dry grass where there should be five feet (1.5 meters) of snow,” Brown said. “This historic drought demands unprecedented action.”

The executive order issued by Brown would aim to achieve a 25 percent reduction in water usage across cities and towns throughout California by a combination of measures.

“As Californians, we must pull together and save water in every way possible,” Brown said.

The reductions would be achieved by ramping up enforcement to prevent wasteful water use, while investing in technologies designed to make California more drought-resilient.

The State Water Resources Control Board, which manages California’s water supply, would be tasked with achieving the reduction.

The order also set out new measures to reduce water use, including the replacement of 50 million square feet (4.6 million square meters) of lawns with drought-tolerant landscaping.

A statewide consumer rebate program would also be set up to encourage individuals to replace old appliances with modern, water and energy efficient models.

The measure orders campuses, golf courses, cemeteries and other large consumers of water to significantly cut use.

New homes and developments would also be banned from using potable water for sprinkler systems unless water-efficient drip irrigation systems are used.

Brown had already declared a state of emergency in California over the crippling four-year drought, the most severe on record.

Environmental experts welcomed the measures but cautioned it remained to be seen how effective they would be. (READ: Scientists warn of ‘mega-drought’ risk in western US)

“These are good and necessary. However, the devil is in the details,” said Timothy Krantz, professor of environmental studies at the University of Redlands in California.

“It is one thing to mandate water rationing/conservation in cities and requiring a 25% reduction, but how will the cities regulate that by their constituents?”

Frantz also noted Brown’s statement had made no mention of the water-intensive industry of enhanced oil production or “fracking.”

The drought has left swathes of California’s landscape unrecognizable, with normally brimming lakes and rivers now dry and losses to the state’s agricultural industry estimated at several billion dollars.

The severity of the crisis was underscored by the venue for Brown’s press conference in the Sierra Nevada mountains in northern California, where levels of the snowpack – a vital source of water – is at record lows.

California Department of Water Resources Director Mark Cowin said the state can expect virtually zero water from the snowpack as it melts in the coming weeks.

“Water conservation must become a way of life,” he said in a statement.

Only four years ago, the measured depth of the snowpack was 124.4 inches.

“To find no snow at all at an area that has averaged around five-and-a-half feet since 1941 indicates the severity of what we are dealing with,” he told AFP.

“Normally when you’re in the mountains, you can see bare ground. But if you look near shaded areas, under trees, you can see patches of snow.

“I was up there this weekend and I didn’t see a single snowflake.” – Rob Woollard, AFP/Rappler.com