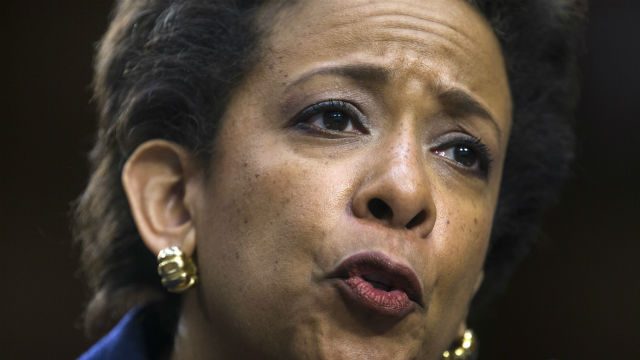 Facebook Twitter Copy URL
Copied
She takes over from outgoing Attorney General Eric Holder, whom Republicans had criticized as being a rubber stamp for Obama's policies

Lynch was confirmed in a 56-43 vote – with 10 Republicans crossing the political aisle to lend their support – following weeks of gridlock after her confirmation process was dragged into a bitter partisan battle over abortion.

She takes over from outgoing Attorney General Eric Holder, whom Republicans had criticized as being a rubber stamp for Obama’s policies.

Lynch’s confirmation brought to an end a months-long process that Democrats noted took longer than the confirmation of the seven previous attorneys general combined.

“Today, the Senate finally confirmed Loretta Lynch to be America’s next attorney general – and America will be better off for it,” Obama said in a statement.

“Loretta has spent her life fighting for the fair and equal justice that is the foundation of our democracy.

Lynch, 55, is US Attorney for the Eastern District of New York, where she thrived as a relentless federal prosecutor putting mobsters and terror suspects behind bars.

Her office has prosecuted more terrorism cases since the 9/11 attacks of 2001 than any other office, noted Democratic Senator Amy Klobuchar, who described Lynch as “exactly the type of tough and tested leader” Americans need in the job.

She has “a world-class legal mind… unimpeachable character, and an extraordinary record of achievement,” Klobuchar said.

With her confirmation dragging on, Lynch dived into her work as US attorney. Just this Monday, she announced a 25-year prison sentence for an American from New York who admitted he tried to join an Al-Qaeda group.

With Republicans seething over what they argue is White House overreach, many expressed hope that Lynch, who would be only the second woman to hold the post after Janet Reno (1993-2001), would strike a less overtly political and combative tone than Holder.

At her confirmation hearing in January, she said she would act independently and aimed to build a “new and improved relationship” with Congress, where Republicans who control both chambers are incensed with Obama’s policies, particularly his unilateral actions last year on immigration. – Rappler.com