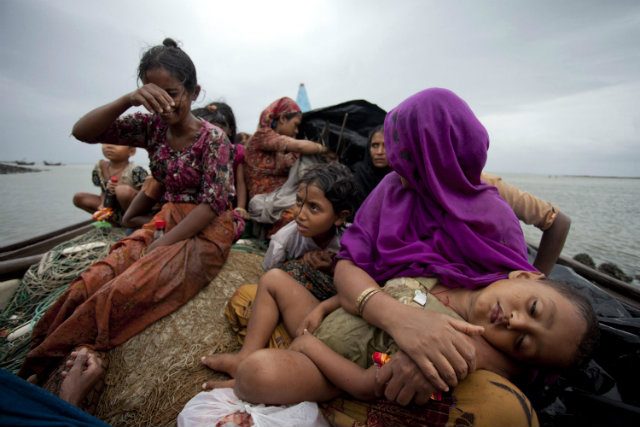 Facebook Twitter Copy URL
Copied
After a 17-nation summit in Bangkok, can the ASEAN pressure Myanmar to stop persecuting Rohingya Muslims, and crack down on human trafficking?

MANILA, Philippines – “How can you talk about a people if you don’t name them?”

The absence of the word “Rohingya” in the invitation, statement, and the very name of a summit of 17 states to tackle Southeast Asia’s most pressing crisis baffled rights groups. At a luxury hotel in Bangkok on Friday, May 29, senior officials discussed the plight of refugees whose pained faces and gaunt bodies depicted a lifetime of rejection on land and at sea.

The silence was a concession to Myanmar, whose discrimination of the Muslim minority it calls “Bengali” global figures tag as a genocide. The euphemism “irregular migrants” is symptomatic of what is wrong with the region’s pinball-like response to the crisis.

“People are playing politics. Because you have 2,000 more lives at sea, the ability to secure them is most important. That is the priority. Let’s not fight about semantics but this is part of the bigger issue,” said Charles Santiago, chair of the ASEAN Parliamentarians for Human Rights, in a Skype interview with Rappler.

While the Bangkok summit was hailed as a breakthrough, civil society groups and international observers question if Association of Southeast Asian Nations (ASEAN) members will go beyond their reluctant search and rescue operations, and offer of temporary shelter.

On the year it promises to launch a community, ASEAN faces the challenge and embarrassment of looking after its most vulnerable people by acting on Myanmar’s persecution of the Rohingya, and the region’s multi-million dollar trafficking trade. ‘Your days are numbered’

The migrant crisis hit international headlines in May but Southeast Asia has been ignoring the issue for years. When Thailand’s crackdown on human trafficking prompted smugglers to abandon migrants at sea, Malaysia and Indonesia drew flak for pushing back wooden trawlers of starving, dehydrated people. The region took notice, and one word caught on: Rohingya. (READ: UN: ASEAN ‘better late than never’ on Rohingya)

The Rohingya are a minority in Buddhist-majority Myanmar, which has denied them citizenship since 1982. Most of the 1.3 million Rohingya live in the western Rakhine state, deprived of access to health care, education, freedom of movement, land and property, and even the right to marry freely.

So intense is the revulsion against the Rohingya that the Burmese protested global criticism of Myanmar’s role in the migrant crisis, calling the Rohingya “terrorists” and “beasts.” Myanmar’s democracy icon, Aung San Suu Kyi, has been largely silent on the politically sensitive issue ahead of elections in November. (READ: Rights group to Suu Kyi, ASEAN: Speak up for Rohingya)

The International Crisis Group explained the deep-seated hatred for the Rohingya in former junta-ruled Myanmar. “It stems from considerable pent-up frustration and anger under years of authoritarianism that are now being directed towards Muslims by a populist political force that cloaks itself in religious respectability and moral authority.”

With such poor conditions, one of the world’s most persecuted minorities has gone on exodus for decades. What brought them unprecedented attention this time around?

Debbie Stothard, coordinator of the Bangkok-based Alternative ASEAN Network on Burma, believes it is increasing desperation that put the nail on the floating coffins. She said only Rohingya men and boys used to get on the boats, but now, up to 30% of the boat people are women and children.

“They know very well that this is an incredibly dangerous and risky journey because the Andaman Sea is a very rough area. For them to risk their life is evidence that they feel they don’t have much chance of survival in Rakhine. As long as the Rohingya are being persecuted, there will always be Rohingya boat people,” Stothard told Rappler via Skype.

A Malaysian and a former journalist, Stothard promotes human rights in Myanmar, also known as Burma. She illustrated how the deadly communal violence in 2012 made life turn from bad to worse for the Rohingya, and even sympathetic Buddhists. 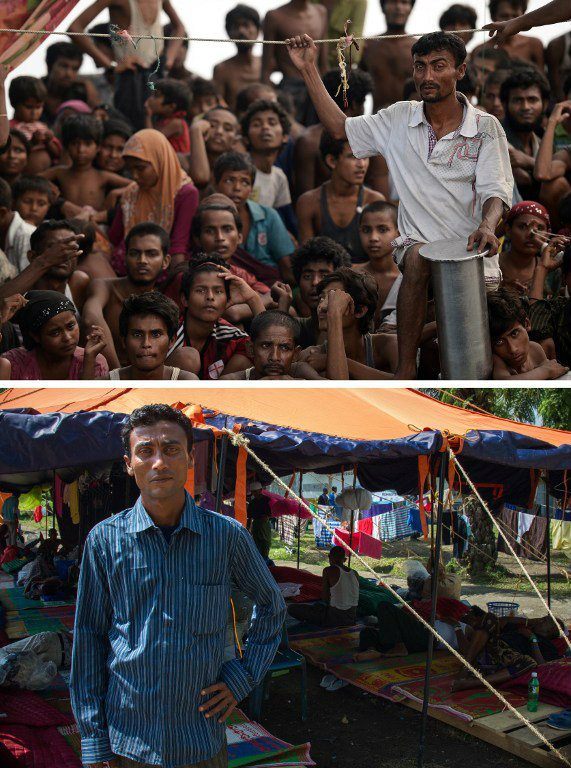 “The violence in Kyauktaw town started when Rakhine Buddhists killed a Buddhist man for selling rice to the Rohingya. They were attacking Buddhists considered traitors for providing humanitarian assistance, and doing business with the Rohingya. Even more tolerant and moderate Buddhists were being persecuted by extremist Buddhist groups supported by the government,” she said.

In last year’s census, the stateless Muslims were not even allowed to identify themselves as Rohingya. Their category? “Miscellaneous.”

This year, Myanmar scrapped their temporary identification cards and voting rights. Just in May, Naypyidaw passed a law feared to limit population growth among the Rohingya, already dealing with a two-child policy in parts of Rakhine.

Stothard said: “Against this backdrop is a very clear message every few months to the Rohingya: your days are numbered. This is why it’s very important for ASEAN to publicly recognize that this is not just a human trafficking issue but a humanitarian disaster that stems from the systematic persecution of the Rohingya.”

Until recently, ASEAN went along with Myanmar’s treatment of the Rohingya crisis as a domestic issue. ASEAN leaders glossed over the issue in summits, and relegated it to the Bali process, which focuses on human trafficking. (READ: Rohingya crisis pushes ASEAN into unfamiliar waters)

Stothard said a 2009 ASEAN statement even named the Rohingya as “the people of the Indian Ocean.”

Charles Santiago, a member of the Malaysian parliament, said the initial refusal of Kuala Lumpur, Jakarta, and Bangkok to help the Rohingya put to question the relevance of ASEAN. It was only after international uproar that Malaysia, this year’s ASEAN chair, initiated a meeting with Indonesia and Thailand.

The crisis put the group in an awkward position, coming on the same year it pushes for an ASEAN Economic Community, a single common market and production base. “ASEAN is seen as a bloc that promotes the interests of business and investments. Economics is the most advanced of all ASEAN pillars,” Santiago said.

“The issue forced the leadership to respond because if it didn’t, then ASEAN will be seen as a businessman’s project, not viewed as an ASEAN responding to vulnerable communities, especially in the case of life and death. If you can’t respond to boat people who need you the most, what good are you as a regional organization?”

Human rights groups urge ASEAN members to sign up to the 1951 Refugee Convention, which bars states from returning refugees to a country where they face persecution. Of the 10 members, only the Philippines and Cambodia are parties. (READ: The Rohingya and the port of last resort)

Still, Santiago sees that the region’s indifference toward the Rohingya is changing. “The problem with ASEAN is the principle of non-interference. This is slowly cracking because Malaysia says, ‘We cannot solve this problem. It has to be solved by Myanmar.’ I think people are now questioning the necessity of non-interference but there is still a long way to go.”

In pressuring Myanmar to grant the Rohingya citizenship and to respect their rights, ASEAN needs the help of the wider international community.

Political science assistant professor Richard Javad Heydarian of the De La Salle University said that ASEAN members, and countries like the US, the European Union and China must be more critical of Myanmar’s democratic transition that began in 2011 after 5 decades of military rule. Observers said donors and partners must use aid and sanctions as pressure.

“With Myanmar’s junta even refusing to acknowledge the persecuted Rohingya as its own citizens, many are beginning to question whether embracing so-called democratic reforms were a bit too premature – and whether the world was too naive about expecting a democratic spring in the country,” Heydarian told Rappler via e-mail.

“So obviously, some countries, especially in the West, are re-examining the relaxation of their sanctions while ASEAN countries like Malaysia and Thailand are focused on ‘constructive engagement’ in order to extract some concessions from Myanmar,” he added. Beyond the persecution, ASEAN must also confront human trafficking. The global trade preys on the poverty and misery of the Rohingya and Bangladeshis seeking better lives and jobs in the relatively affluent, Muslim-majority Malaysia. Thailand and Indonesia are viewed as transit points.

Migrants either pay or are kidnapped to board ships. If they survive the human domino-like journey, they are held captive in jungle camps until relatives can put up ransom. Rights groups and news reports estimate the cost of “safe passage” to go up to $1,000 to $2,000. Others are sold to slavery, and some ended up in the mass graves recently found in Thailand and Malaysia.

Santiago said that the people of ASEAN are also part of the problem. He said that in Malaysia, there are about 4 million undocumented migrant workers.

“They are being hired sometimes as maids in our homes. They are hired by plantations to work, construction workers, all over the place. In some sense, our society is entrenched in using undocumented workers because wages are low, and they work for longer hours. All of us are culpable. There’s a need for society to think about this,” Santiago said.

The Malaysian lawmaker suggests that hiring undocumented workers be made a jail sentence. He also wants ASEAN formulate a binding declaration against trafficking to crack down on erring employers, and to put up a regional police and navy surveillance mechanism.

“The long-term solution is help the people stranded in open seas: women, children, the malnourished. But the long-term policy is to smash this racket, this network of people trafficking.” ‘They don’t want me’

In the Bangkok summit, governments agreed to intensify search and rescue efforts for the over 2,000 still at sea, to create a task force to deal with migrants, and to address the “root cause” of the crisis, a mere hint at the apartheid-like conditions of the Rohingya in Myanmar.

The implementation of this agreement remains unclear, with heads of state and many ministers absent.

Stothard said also missing in the meeting were the people whose outcry forced their leaders to act. The activist said that the response to the crisis showed that civil society groups and the larger public have a crucial role in keeping the issue on the Southeast Asian agenda.

Even former ASEAN leaders had the foresight to write the bloc back in April urging the group to address rising intolerance against the Rohingya.

“Behind the scenes, former leaders pushed for a change in position. The ASEAN civil society, to its great credit, took a stand. People put together money, went on boats and tried to go out on sea to find the stranded boat people. In Aceh, the local fisherfolk who live a hand-to-mouth existence towed back boats expelled by the Indonesian navy,” Stothard said.

Indonesians and Malaysians have since been donating food, water, and clothing to the refugees. The moral suasion of global heavyweights like Pope Francis, the Dalai Lama, South Africa’s Desmond Tutu, and UN Secretary-General Ban Ki-Moon backed the people’s call.

Now that governments resolved to find and to take in refugees for a year, Stothard said the focus of ASEAN must now be on ensuring that the Rohingya like 12-year-old Hussein Ahmed in Aceh are respected, remembered and called by name.