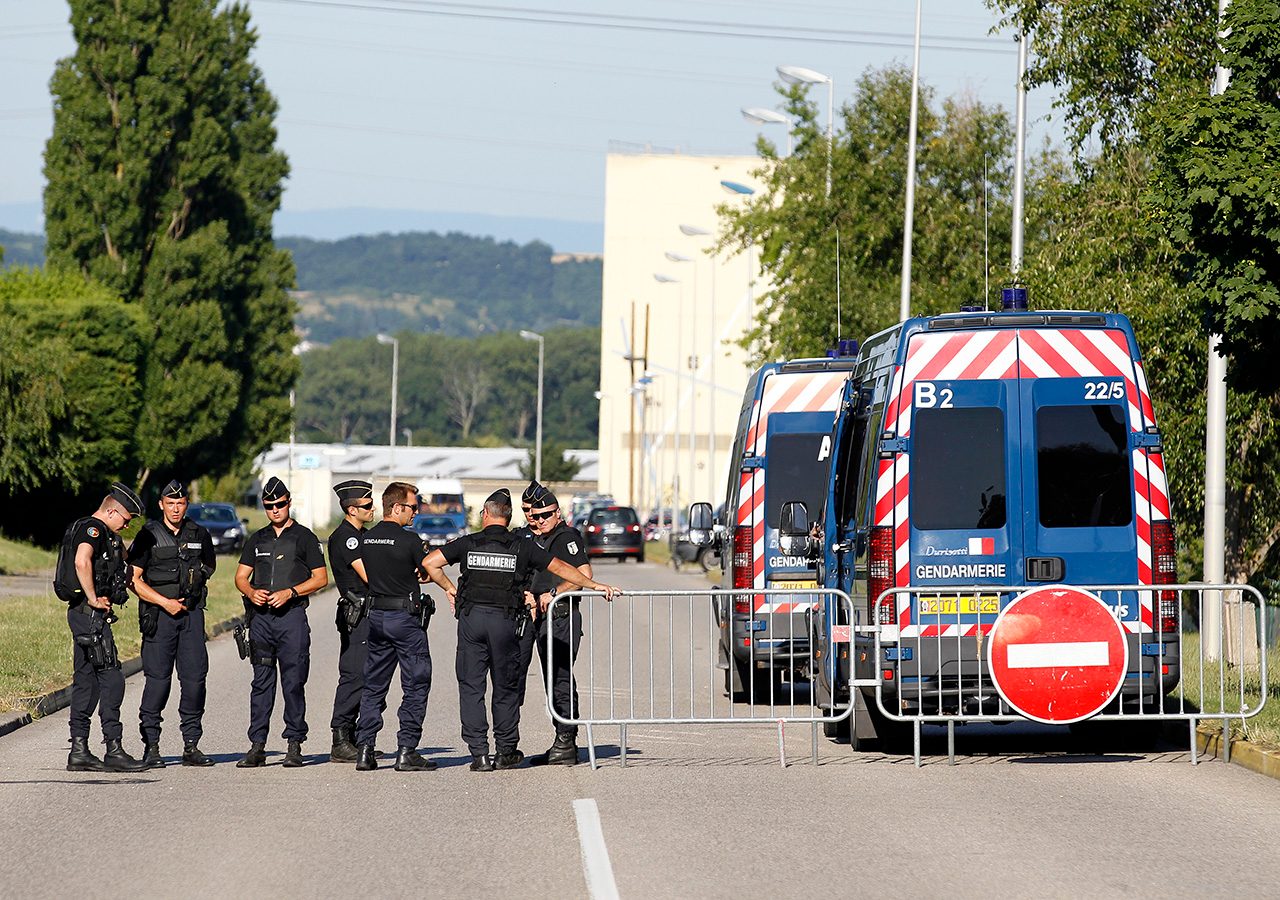 Facebook Twitter Copy URL
Copied
'The question is not... if there will be another attack, but when,' says Prime Minister Manuel Valls

SAINT-QUENTIN-FALLAVIER, France – Prime Minister Manuel Valls warned Saturday, June 27 that France faced more attacks to come after a grisly killing in which a suspected Islamist pinned the severed head of his boss to the gates of a gas factory.

The alleged assailant, identified as 35-year-old married father-of-three Yassin Salhi, also caused an explosion by smashing his vehicle into the Air Products factory near France’s second city of Lyon.

The grisly killing came on the same day as two other attacks claimed by the Islamic State (IS, formerly known as ISIS or the Islamic State in Syria and Iraq) jihadist group, which left 38 people dead at a beach resort in Tunisia and 27 in a suicide bombing in Kuwait.

The victim, a 54-year-old local businessman, was found with Arabic inscriptions scrawled on him and Islamic flags were also found on the site at the small town of Saint-Quentin-Fallavier, some 40 kilometers (25 miles) from Lyon.

His head was “hung onto the fence surrounded by two Islamic flags bearing the Shahada, the profession of (the Muslim) faith,” said French prosecutor Francois Molins.

Valls said the attack on Friday, June 26 would create tension in France – home to Western Europe’s largest Muslim population – that “will be exploited”.

“It’s difficult for a society to live for years under the threat of attack,” he told AFP on a flight back from Bogota, adding: “The question is not… if there will be another attack, but when.”

This is the first time someone in France has been found beheaded by a suspected Islamist, a method of killing that has become a trademark of the Islamic State group in Iraq and Syria. (READ: ‘Wolf in sheep’s clothing’: Suspect in French attack)

It also came nearly 6 months after the Islamist attacks in and around Paris that left 17 people dead, starting with a shooting at satirical magazine Charlie Hebdo.

Speaking in Brussels after cutting short an EU summit, French President Francois Hollande labelled the factory beheading “a terrorist attack,” adding that “the intent was without doubt to cause an explosion”.

Salhi had been known to security services for a number of years but did not have a criminal record, Interior Minister Bernard Cazeneuve said.

He had been investigated for links to radical Salafists but had never been identified as planning an attack.

A co-worker described him as “a wolf in sheep’s clothing” to RTL radio, adding that Salhi had spoken to him about Islamic State – “not to try recruit me for anything but simply to ask my opinion”.

Sources close to the investigation said the victim of the attack ran the delivery company that employed Salhi.

Molins said Salhi, his wife, sister and another man had been taken into custody.

The second man is being investigated on terrorism-related charges but his link to the attack is not clear, and Molins said there was no indication that Salhi had an accomplice with him during the assault.

A woman identified as Salhi’s wife told French radio: “On the news they are saying that it’s a terrorist attack, but that’s impossible. I know him, he’s my husband. We have a normal family life.”

The boss of Air Products, the US firm that owned the factory, said he was “horrified and saddened” by the attack, while residents of Saint-Quentin-Fallavier also expressed their shock.

“This is a small town and a large industrial zone. There’s never been any concern in the region. We’re all surprised,” an employee at a nearby business told news channel BMFTV.

Hollande ordered security tightened to the highest possible level in the region ahead of a second emergency meeting of key ministers due to be held at 0900 GMT on Saturday.

Salhi drove into the factory at 9:28am (0728 GMT) local time, and disappeared from the view of security cameras until 9:35am when they picked up the van accelerating towards one of two hangars, Molins explained.

A minute later a massive blast was heard.

Firefighters arrived at the site minutes later, where they found the suspect inside one of the hangars, which contained bottles of gas, liquid oxygen and highly explosive acetone.

“Firefighters surprised the suspect while he was busy opening bottles of acetone,” said Molins.

The blast destroyed part of the hangar and severely damaged the delivery van, which Molins said was sign of “a significant explosion”.

For months, Europe has been on high alert for so-called “lone wolf” attacks by supporters of Islamic State, which has urged its followers to strike wherever they can.

France has been on edge since January 7 when two Islamist brothers attacked Charlie Hebdo, killing 12 people.

A policewoman and 4 hostages in a Jewish supermarket were also killed during three days of attacks, which brought nearly 4 million people, including dozens of world leaders, onto the streets of France in a historic “march against terrorism”.

France has seen hundreds of citizens travel to Iraq and Syria to fight alongside jihadist groups.