One justice makes big difference in US gay marriage ruling 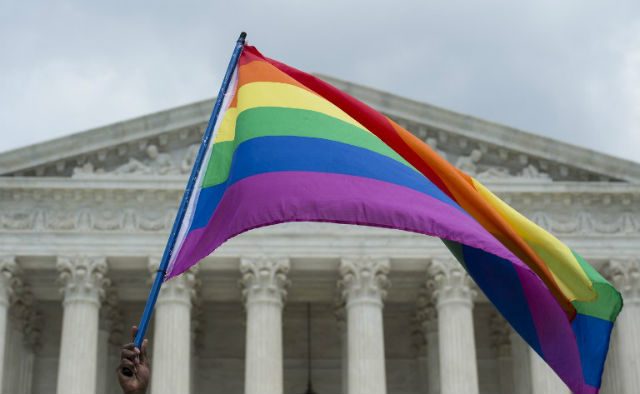 Facebook Twitter Copy URL
Copied
With the historic ruling, Justice Anthony Kennedy 'has ensured that his name will be forever linked with the recognition of equal rights for gay men and lesbians'

WASHINGTON, USA – He was appointed in the 1980s under the conservative presidency of Ronald Reagan, but Supreme Court Justice Anthony Kennedy has gone on to become perhaps the most important gay rights supporter in the American legal system.

The gray-haired 78-year-old cemented that position Friday, June 26, when he wrote the majority opinion for the 5 judges – or justices as they are known – who ruled to allow gay marriage across the United States.

“No union is more profound than marriage for it embodies the highest ideals of love, fidelity, devotion, sacrifice and family,” Kennedy said, his deep voice resonating around the solemn surroundings of the Supreme Court.

“In forming a marital union, two people become something greater than once they were.”

All eyes were fixed on him. Without Kennedy – who soon found himself trending on Twitter – gay marriage would not have been legalized at the federal level.

That’s because Kennedy is seen as an important “swing vote,” siding with the court’s 4 liberal judges instead of the conservative bloc on some issues – including gay marriage.

Friday’s momentous ruling was met with jubilation by many same-sex couples, including those who had been living in the 13 states that banned gay marriage.

“Their hope is not to be condemned to live in loneliness, excluded from one of civilization’s oldest institutions,” Kennedy said in his ruling.

“They ask for equal dignity in the eyes of the law. The Constitution grants them that right.”

“Justice Kennedy has become probably the most powerful jurist in the entire world because he’s the point on so many issues before the Supreme Court of the US, and though he only has one vote, his vote literally changes most cases,” said Mary Margaret Penrose, law professor at Texas A&M University.

David Cruz, an expert from the University of Southern California Gould law school, said that without Kennedy’s vote, states would have remained free to exclude same-sex couples from civil marriage.

Kennedy was the “favorite to write the decision that extends same-sex marriage nationwide,” Cruz said.

In the past, Kennedy – who is considered moderate – has taken positions on civil rights that demonstrate his “flexibility” in interpreting the Constitution, lawyer Lisa Linsky said.

“His positions and decisions in major civil rights cases over the years demonstrate that he is a humanitarian,” she said.

“His constitutional scholarship is rooted in common sense and the recognition that societies, attitudes and institutions change and evolve.”

Legal analyst Elizabeth Wydra told Agence France-Presse that Kennedy’s words would be immortalized in the “Obergefell v. Hodges” ruling, as the case is known.

“With this ruling, Justice Kennedy has ensured that his name will be forever linked with the recognition of equal rights for gay men and lesbians,” Wydra said.

“He has used language so sweeping and powerful to describe the desire for equal dignity that it brings a tear to the eye.”

In 1996, Kennedy wrote the decision in the landmark “Romer v. Evans” case on the protection of civil rights for gays and lesbians. In 2003, the court struck down anti-sodomy laws in “Lawrence v. Texas.”

And in 2013 in “United States v. Windsor” Kennedy wrote the majority opinion against the Defense of Marriage Act.

The decision to hand down the ruling in the “Obergefell” case Friday was likely no accident, as June 26 was also the date in the years when Kennedy and the court released the rulings in “Lawrence” and “Windsor.” – Chantal Valery, AFP/Rappler.com