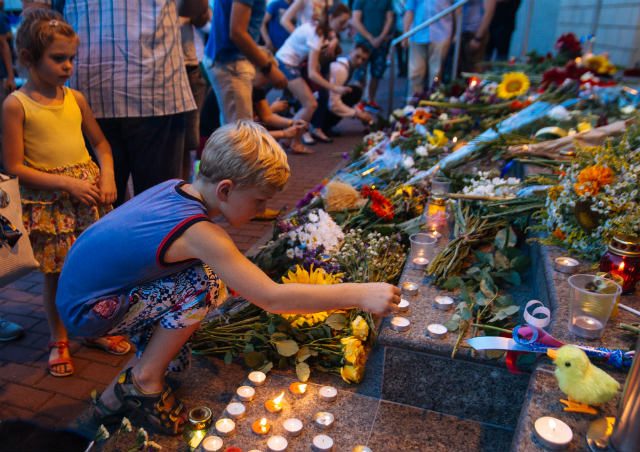 SEPANG, Malaysia – Families of those killed when Malaysia Airlines flight MH17 was shot down over Ukraine last year demanded justice Saturday, July 11, at an emotional memorial ceremony ahead of the first anniversary of the disaster.

The sombre memorial service at Kuala Lumpur International Airport was attended by Prime Minister Najib Razak, and relatives of those who died used the opportunity to air their continued frustrations over the handling of the tragedy.

“We want to find out who shot down the plane. We must find out,” said Ivy Loi, whose husband Captain Eugene Choo was one of the pilots on board the flight.

Loi, who was greeted by many Malaysia Airline employees at the event, attended the service with her two sons and relatives.

“We’re just trying to cope,” she added as she wiped away tears.

The Boeing 777 passenger jet was travelling between Amsterdam and Kuala Lumpur when it was shot down in eastern Ukraine on July 17, during some of the worst fighting between government forces and pro-Russian separatists who took up arms against Kiev’s pro-Western government a few months earlier.

All 298 passengers and crew on board the Malaysia Airlines jetliner – the majority of them Dutch – died. (READ: 3 Filipinos in downed Malaysia plane)

Suspicions immediately fell on the separatists, who may have used a surface-to-air missile supplied by Russia to shoot down the plane.

But Moscow flatly denied it was involved and pointed the finger instead at Ukraine’s military.

Speaking at the memorial, Najib said the international criminal probe into the downing of the plane was ongoing and could be completed by the end of the year.

“Detailed investigations are still continuing… and they are expected to be finished by the end of 2015 at least,” he said.

‘It’s Ramadan and we feel the sadness’

The memorial was held on Saturday instead of the first anniversary – July 17 – because it falls during Eid al-Fitr, Islam’s biggest festival and the culmination of the fasting month of Ramadan, a time of joyful family gatherings.

The timing of the anniversary is therefore especially painful for Muslim-majority Malaysia.

“It’s Ramadan and we feel the sadness,” said Shahadat Bey, whose aunt died in the crash.

“Everyone is just pointing fingers but it’s very important that we get some closure and justice because everybody needs to know what happened,” he added.

Madzalina Ghazalee, whose sister perished in the disaster, said the past weeks had been a difficult time.

“For Ramadan, we’re sad because we’re so used to having all the family members around during this period but now its not the same,” she said.

Rita Phang, 62, lost her cousin when the plane was downed.

“I know it’s almost a year, but we still feel sad, even though we know we have to accept the way things are,” she said. “But action needs to be taken. I want justice to be served.”

The event saw grieving families observe a minute’s silence. Many cried and became emotional when the names of the passengers scrolled across screens in tribute to the dead.

Transport Minister Liow Tiong Lai insisted that the government was doing all it could.

“Malaysia is single-minded in making sure we find out who the people responsible for this tragedy are,” he said.

Malaysia is working with Australia, Belgium, the Netherlands, and Ukraine – all member countries of the Joint Investigation Team – on setting up an international tribunal.

A draft Unuted Nations (UN) resolution, obtained by AFP, calls for establishing the tribunal under Chapter 7 of the UN charter, which means that the court’s efforts to prosecute those responsible could be enforced by sanctions.

Malaysia’s UN ambassador Ramlan Ibrahim told the 15-member Security Council in early July that a UN court would “provide the highest degree of legitimacy for the trial.”

However, Russia said on Thursday it would oppose the resolution.

Just 4 months prior to the MH17 incident, Malaysia Airlines Flight MH370 vanished without a trace with 239 people on board after its communications systems were apparently deliberately shut off, becoming one of aviation’s enduring mysteries. – Satish Cheney, AFP/Rappler.com