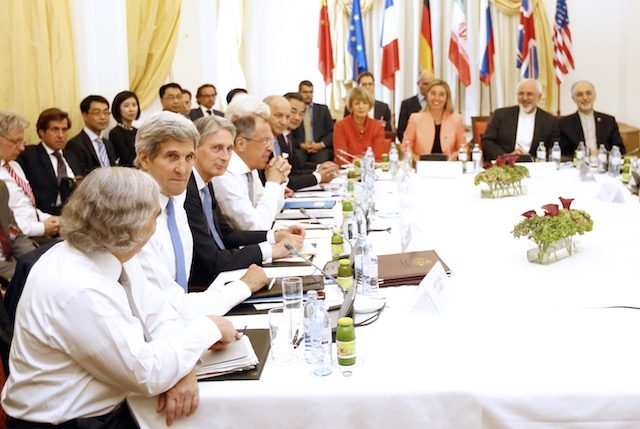 Iran’s arch-foe Israel quickly lashed out at the agreement, which Prime Minister Benjamin Netanyahu described as “a historic mistake for the world”.

The breakthrough came on the 18th day of marathon talks in Vienna between Tehran and the so-called P5+1 – the United States, Russia, China, Britain, France and Germany.

“The agreement is concluded,” a diplomat close to the discussions told AFP in the Austrian capital, where a final ministerial meeting between Iran and the world powers was under way to adopt the deal.

An Iranian negotiator also said the long-running haggling had reached a “successful conclusion”.

The head of the UN atomic watchdog said he had signed a “roadmap” with Iran for probing suspected efforts to develop nuclear weapons, a key part of an overall accord.

The landmark deal is expected to sharply curb Iran’s nuclear programme and impose strict UN inspections in order to make any drive to make nuclear weapons all but impossible and easily detectable.

In return, the web of UN and Western sanctions choking Iranian oil exports and the economy of the country of 78 million people would be progressively lifted.

The IAEA has long sought to probe allegations that at least until 2003 Iran’s nuclear programme had “possible military dimensions” — that it conducted research into making a nuclear bomb.

The diplomatic push began when Iranian President Hassan Rouhani came to power in 2013. In November that year an interim deal was agreed but two deadlines in 2014 for a lasting accord were missed.

Then in April, the parties scored a major breakthrough by agreeing the main outlines of an accord, aiming to finalise it by June 30, a deadline since pushed back twice.

The final hurdles had included the exact timing and pace of sanctions relief and Iran’s desire to have a UN arms embargo lifted.

Foreign ministers including US Secretary of State John Kerry huddled late into the night at Vienna’s Palais Coburg.

China’s Foreign Minister Wang Yi told reporters as he arrived on Monday that there should be “no more delays”, adding that no deal could be “perfect”.

The agreement is a diplomatic victory for US President Barack Obama, who made the talks a centrepiece of his foreign policy, as well as for Rouhani, a moderate seeking to bring his country in from the diplomatic wilderness.

They have faced opposition from hardliners from home, as well as from Iran’s arch-foe Israel, believed to be the only country in the Middle East with atomic bombs, although it has never confirmed it.

Netanyahu has repeated warned that a “bad deal” with Tehran would be worse than no deal at all.

“In every area where it was supposed to prevent Iran attaining nuclear arms capability, there were huge compromises,” his office quoted him as saying Tuesday about the agreement.

Saudi Arabia and other Sunni-ruled Gulf Arab states are also deeply suspicious of Shiite Iran, accusing it of fomenting unrest in Syria, Yemen and elsewhere in the Middle East.

Many in the United States, particularly among Obama’s Republican opponents, also say the mooted deal is too weak.

The agreement will prove a “hard sell” in the US Congress, which will have 60 days to chew over the accord, top Republican Mitch McConnell said in an interview broadcast Sunday.  – Simon Sturdee and Charlotte Plantive, AFP / Rappler.com