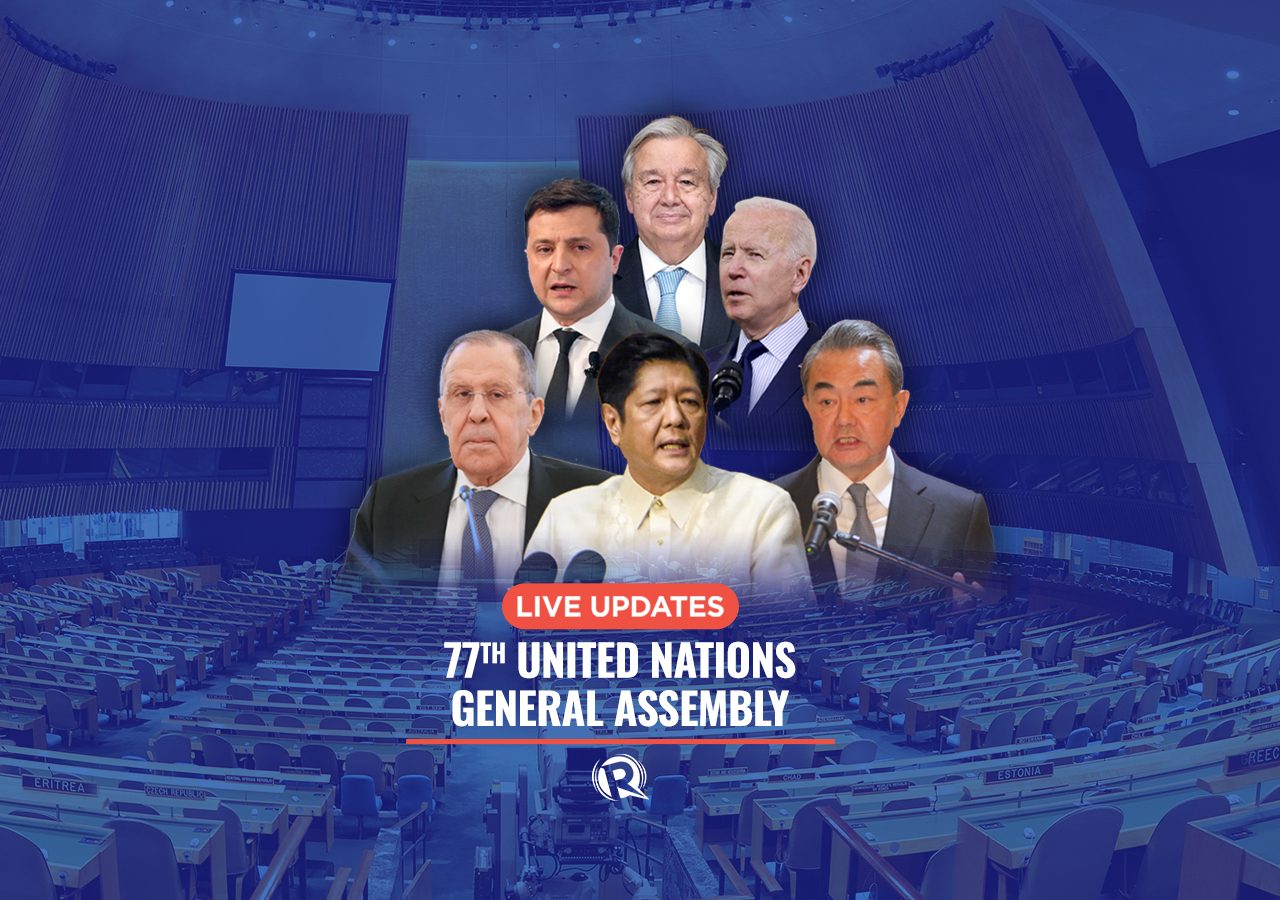 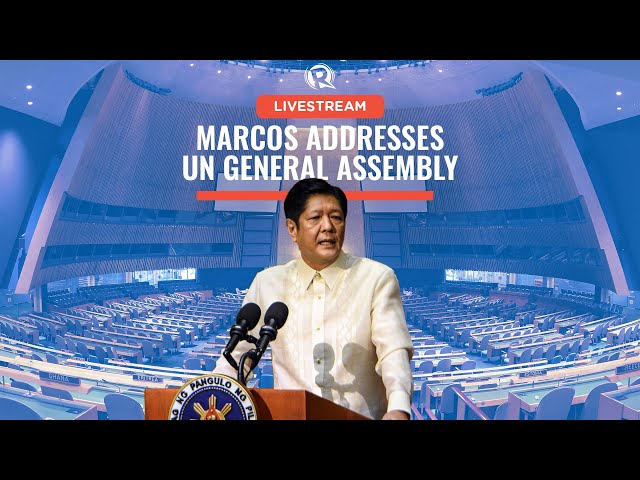 World leaders are gathered in New York for the 77th United Nations General Assembly (UNGA), a premier multilateral gathering and the world’s most important diplomatic stage.

Fully physical for the first time since the COVID-19 pandemic broke out, the UNGA officially opened on September 13 with the election of Hungarian diplomat Csaba Kőrösi as president.

General debates, known as one of the most important events of the gathering, are scheduled to begin on Tuesday, September 20, and will run until Monday, September 26.

Stakes are high for the annual meeting, with member states expected to tackle the ongoing war in Ukraine, crisis in Myanmar, food shortages, climate change, as well as recovery from the coronavirus pandemic, among other topics.

The General Assembly likewise voted in favor of allowing Ukrainian President Volodymyr Zelenskiy to send a prerecorded video statement. The decision was adopted with 101 votes in favor, 7 against, and 19 abstentions.

Bookmark and refresh this page for articles, photos, and videos on the latest developments in the 77th United Nations General Assembly.

Citing the Philippines’ “experiences in building peace and forging new paths of cooperation,” President Ferdinand Marcos on Tuesday, September 20 (early morning September 21 in the Philippines) made a bid for the Philippines to earn a seat in the United Nations Security Council. During his first address at the UN General Assembly, Philippine President Ferdinand Marcos Jr. called for a “reformed and more inclusive Security Council” as the world grapples with the effects of the ongoing war in Ukraine.

In a surprise statement, the Philippine leader also urged other countries to support Manila’s candidature to the UN body for the 2027-2028 term.

“My country’s experiences in building peace and forging new paths of cooperation can enrich the work of the Security Council. And to this end, I appeal for the valuable support of all UN member states for the Philippines’ candidature to the Security Council,” he said.

“The leaders resolved to work together to tackle the strategic threat posed by China.”

Truss and Kishida agreed on the importance of democracies working together, including through international institutions such as the G7, to constrain economic and security threats from “authoritarian regimes,” the statement said.

Truss, who also met French President Emmanuel Macron in New York, plans to use her first trip abroad since taking office on September 6 to pledge billions of pounds of further support for Ukraine to defend itself against Russia.

In his first address at the United Nations, President Ferdinand Marcos Jr. recalled the Philippines’ track record in upholding international law through the 1982 Manila Declaration on the Peaceful Settlement of International Disputes – a document that reiterated the obligation of states to settle disputes through the rule of law.

Marcos also drew specific attention to the United Nations Convention on the Law of the Sea (UNCLOS), in which the Philippines reinforced “predictability and stability.” The Philippines’ legal victory against China or the 2016 Hague ruling further clarified provisions of the UNCLOS, though Marcos made no explicit mention of the arbitral award.

WASHINGTON, United States – US President Joe Biden will try to rally the world against Russia’s invasion of Ukraine in a speech to the United Nations General Assembly on Wednesday, saying Moscow’s war against its neighbor violates the tenets of the UN charter that established the post-World War Two body.

Biden departs on Tuesday to join the conclave of world leaders in New York. He will have his first in-person meeting with new British Prime Minister Liz Truss on Wednesday and participate in a summit aimed at collecting pledges to help nations battle diseases.

White House national security adviser Jake Sullivan said Biden would not use his speech to argue that Russia should be ousted as a member of the UN Security Council, where it is one of five permanent members, capable of vetoing any security resolution.

But he said Biden will urge all nations to see that Russia’s war against Ukraine is a violation of the U.N.’s 1945 charter signed by the countries that fought the Axis Powers in World War Two.

UN members, aiming to “save succeeding generations from the scourge of war” and set conditions for nations to “live together in peace,” pledge to “refrain in their international relations from the threat or use of force against the territorial integrity or political independence of any state, or in any other manner inconsistent with the purposes of the United Nations,” the charter reads.

“This is a message that every country, however they feel about Russia, Ukraine, the United States, everyone should be able to center around this basic proposition: You cannot conquer your neighbor’s territory by force and peace will come fastest and most decisively if Russia abandons that effort,” Sullivan said.

Russian President Vladimir Putin says the West wants to destroy Russia, that economic sanctions imposed on Moscow in response to the conflict are akin to a declaration of economic war and that Russia will build ties with other powers such as China and India. The Ukraine war was necessary because expansion of the US-led Western military alliance NATO represented an existential threat to Russia, Putin has said.

But Indian Prime Minister Narendra Modi told Putin last week that now is not the time for war, and Chinese president Xi Jinping expressed questions and concerns about the situation last week when the two leaders met.

Sullivan said every country should make a case against Russia’s war.

Iran, West at odds, US sees no breakthrough on nuclear deal at UN

NEW YORK/WASHINGTON, United States – Iran and the West remained at loggerheads on Tuesday, September 20, over UN probes of uranium traces at three Iranian sites as the United States said it did not expect a breakthrough on reviving the 2015 Iran nuclear deal at this week’s UN General Assembly.

Tehran has pushed Washington to commit to closing investigations by the International Atomic Energy Agency (IAEA) into uranium traces found at three undeclared sites before it will fully implement a proposed deal to revive the nuclear pact.

The United States and its partners, however, reject that stance, arguing the investigations can only conclude when Iran has given satisfactory answers to the Vienna-based UN agency.

Resolution of the investigations is critical to the IAEA, which seeks to ensure parties to the Nuclear Non-Proliferation Treaty are not secretly diverting nuclear material which they could use to make a weapon.

French President Emmanuel Macron and Iranian President Ebrahim Raisi each laid out familiar positions on the uranium traces issue after their talks during the annual gathering of global leaders in New York.

“The ball is now in Iran’s court which has to say whether it accepts the conditions that have been set formally by the Americans and Europeans,” Macron told reporters after meeting Raisi, saying the West would not pressure the IAEA to close the probes.

Speaking in Washington, White House national security adviser Jake Sullivan said he did not expect any breakthrough during this week’s U.N. meetings but reiterated the U.S. willingness to revive the deal, under which Iran limited its nuclear program in return for economic sanctions relief.

However, Raisi said Tehran continues to demand the IAEA close its investigations and the United States, which abandoned the nuclear deal in 2018 under then-President Donald Trump, provide guarantees to limit the effects of its reneging again.

“Iran’s demand to receive guarantees is a completely reasonable and logical demand,” Raisi told Macron, according to the Iranian leader’s office. “We believe that it is not possible to reach an agreement without the IAEA closing its probes.”

The Macron-Raisi meeting is the Iranian president’s first head-to-head with a major Western leader since he was elected last year.

It comes amid a complete stalemate to revive the 2015 nuclear talks and as protests grow in Iran over the death of Mahsa Amini, 22, who fell into a coma and died after her arrest in Tehran last week by the morality police for “unsuitable attire.” 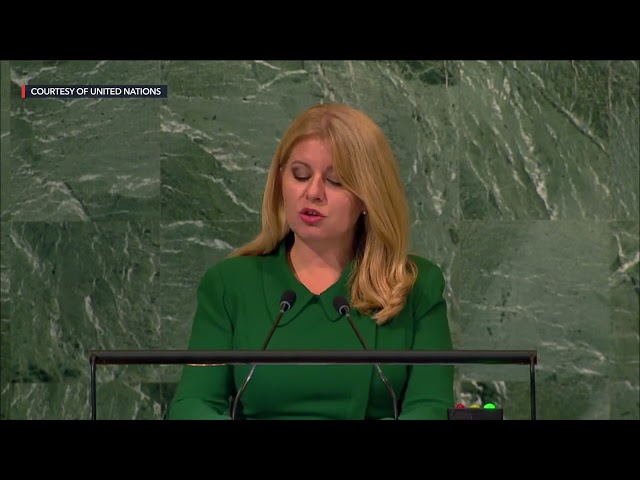 Čaputová: We are facing an epidemic of lies, propaganda, and disinformation…. If algorithms favor hatred over truth or nonsense over science, if they appeal to our instincts rather than greater good, what hope is there for global understanding? | via @jeegeronimo #UNGA