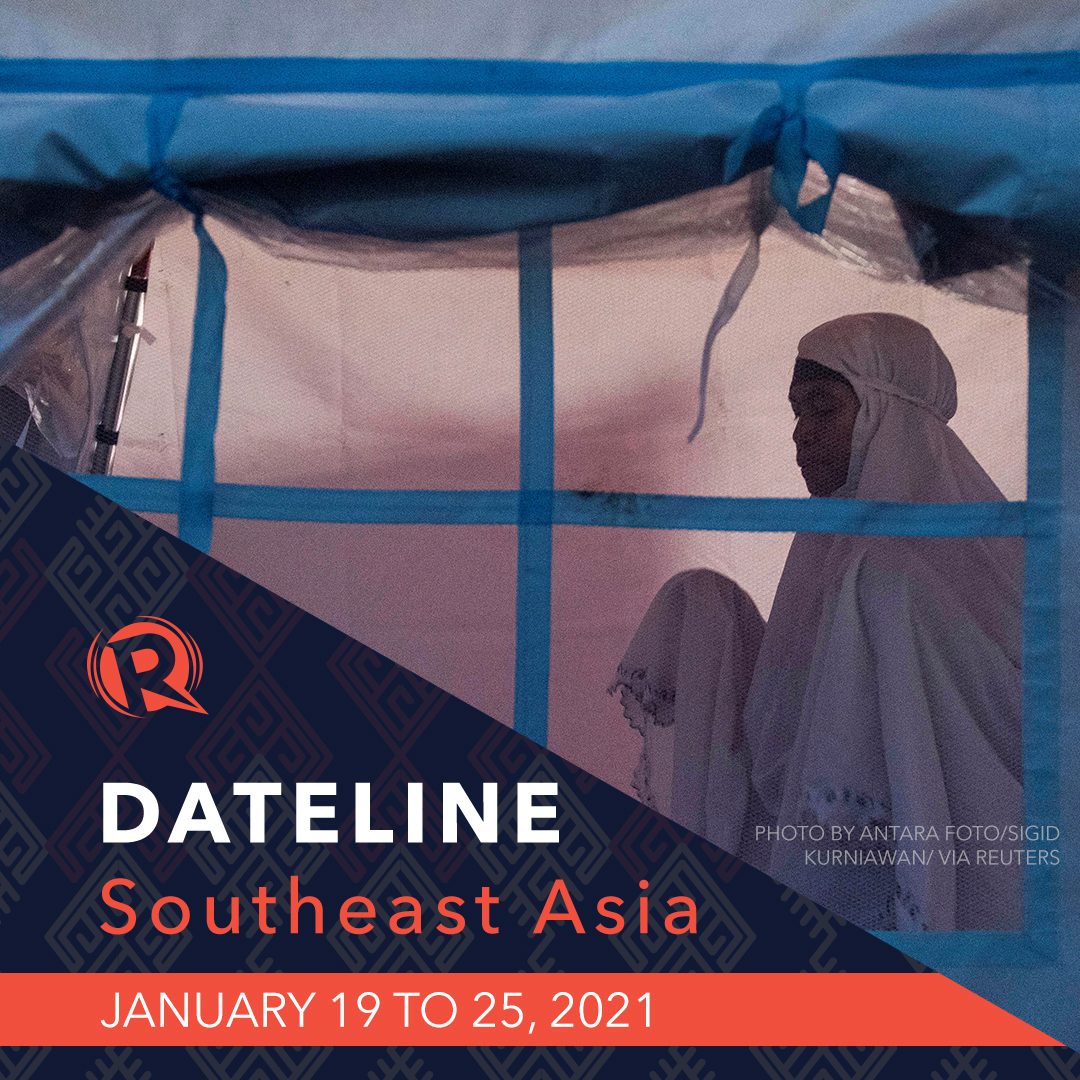 Indonesia is still reeling from the events of the past few weeks, with the country reporting a record daily rise in COVID-19 deaths. Alongside this, it also has to deal with the aftereffects of an earthquake on Sulawesi island, as well as the crash of Sriwijaya Air Flight SJ 182 on January 9.

Meanwhile, as countries seek to gain their respective footholds in the upward climb towards acquiring enough COVID-19 vaccines, Thailand also has to contend with opposition criticism – that the country overly relies on on a company owned by King Maha Vajiralongkorn for its coronavirus vaccine strategy.

Thailand said on Monday, January 25, it would start its coronavirus inoculation program next month by administering 50,000 doses of AstraZeneca’s vaccine to high-risk groups, as it faces accusations of being too slow to secure vaccines.

Health workers in Samut Sakhon province, the epicenter of the latest outbreak, would be the first to be inoculated, then elderly and people with chronic diseases.

Dinner is late. The laundry isn’t done. The pickles aren’t sour enough. When it comes to reasons for a man to beat his wife, Rem Ran has heard it all.

For most his 40 years, the construction worker saw domestic violence as “a normal part of life” in a nation where, until 2007, girls were taught in school not to challenge husbands via a traditional code of conduct still found in some textbooks.

Now he steps in when domestic disputes erupt in his rural community and is part of a nationwide drive to instil men as advocates for women’s rights, as Cambodia this month also launched a national plan to combat violence against women.

Seven of the new infections were imported, a COVID-19 task force told a briefing. One additional coronavirus-related death was recorded, bringing total fatalities to 73 since the outbreak began last year.

The new cases included 18 imported cases and one additional death, taking the total number of coronavirus-related fatalities to 72, a COVID-19 taskforce said. – Rappler.com

That brings total infections in the Southeast Asian country to 176,180 cases and 660 total deaths.

On Thursday, January 21, Malaysia extended restrictions on movement in the capital Kuala Lumpur and five states until February 4 to combat a surge in coronavirus infections, effectively putting most of the country under lockdown.

Relatives of those killed in the Sriwijaya Air plane crash on Jan. 9 wept and threw red and white petals into the ocean on Friday, January 22, after an Indonesian navy vessel took them to the site in the Java Sea where their loved ones perished.

Flight SJ 182 crashed minutes after take-off from Jakarta, killing all 62 people on board. Indonesian authorities on Thursday, January 21, halted the search for victims, but said the hunt would continue for the jet’s cockpit voice recorder (CVR).

“I recalled my brother’s face as I threw the flowers,” said Heri Purnomo, of his late brother Nurkholid Fatil Amin, a father of two. “Tears kept streaming down, it was as though his face was reflected from the sea’s surface.”

During the search and rescue operation in one of Indonesia’s worst aviation disasters, divers retrieved wreckage from the plane and remains of the victims, which have been taken to a police hospital for DNA identification.

“We hope from the body parts that have been found they can identify our brother,” Heri told reporters. “(So) we can bring his body to bury in Pontianak.”

Sriwijaya Air Chief Executive Jefferson Irwin Jauwena, who was also on board the navy vessel, said the entire airline was deeply saddened by the crash.

“We also lost our family in the Sriwijaya Air Group. I am personally devastated by this incident,” he said, noting the airline had pledged to provide assistance to the victim’s families.

Indonesia’s air accident investigator is probing whether a problem with the Boeing <BA.N? 737-500’s autothrottle system, which controls engine power automatically, contributed to the fatal crash.

The European parliament has chastised Vietnam for a government crackdown against activists in the Southeast Asian country and called on EU member states to condemn the campaign ahead of a major ruling Communist Party congress next week.

EU lawmakers voted 592 to 32 with 58 abstentions on Thursday, January 21, in favor of a resolution which called for a tougher stance against the Vietnamese government and highlighted a link between human rights abuses and an EU-Vietnam trade deal.

In a media release, the European Parliament said lawmakers were “appalled by and condemn the intensifying crackdown on dissent and the increasing violations of human rights in Vietnam.”

“Respect for human rights constitutes a key foundation of the bilateral relations between Vietnam and the EU and is an essential element of the EU-Vietnam Free Trade Agreement,” it said.

Vietnam’s foreign ministry did not immediately respond to a request for comment on the resolution.

The Communist Party of Vietnam is due to hold its 13th National Congress on Monday, January 25, a major political meeting to set out policy objectives for the next 5 years and select a new leadership.

Rights groups have accused the party of presiding over a crackdown on activists that has intensified under its current leadership.

A Reuters tally based on state media reports found 280 people were arrested for “anti-state” activities in the 5 years since the last congress in 2016: 260 were convicted, many being sentenced to more than 10 years in jail.

The European parliament resolution, which is non-binding on member states, said the terms of the trade deal allowed for “appropriate action to be taken in the event of serious breaches of human rights.”

It also called on EU member states to “strongly voice their concerns regarding the worsening human rights situation in Vietnam” ahead of the congress.

Thailand reported 309 new coronavirus cases on Friday, January 22, bringing the total number of infections to 13,104 since it detected its first case a year ago.

The tally included 12 imported cases and there were no new deaths reported, the country’s COVID-19 task force said. Thailand has recorded 71 coronavirus-related fatalities so far.