A look into millennials’ ideal metro Facebook Twitter Copy URL
Copied
Are young professionals searching for the right things when it comes to metro living?

MANILA, Philippines — Unlike in Western countries, children from Filipino families are not expected to leave the nest when they turn 18. They are pretty much welcome, encouraged even (blame it on sentimentality), to stay in their parents’ homes as long as they like.

Take Grace. At 27 years old, she has a stable job but still lives in their family home. Her parents are only expecting her to move out when she gets married.

“My parents don’t see why I should live away from them. I can easily commute to and from work,” said Grace.

This is the current living situation of 46% of respondents, majority aged 18-36, in a survey conducted by The Nerve.

Most say they’re happy about it. But could they be missing out on all the fun?

Whoever said independence is happiness may be on the right track.

It turns out the highest number of those who say they’re happy or extremely happy (63%) about their present living situation are those who have their own place. 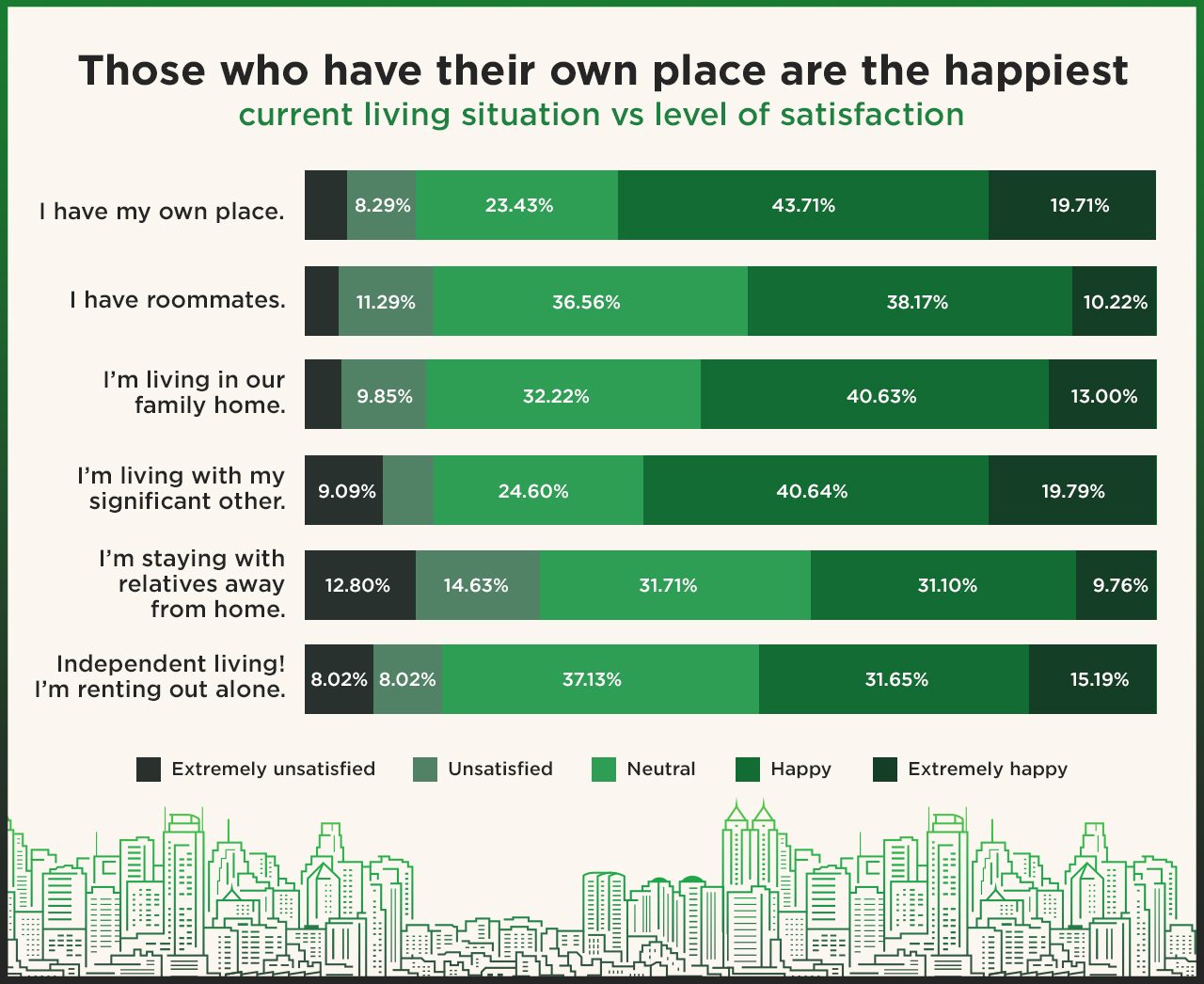 Though many may say they’re contented living with relatives or at the family home, it may just take an extra push to unlock greater happiness.

For many, that nudge is a good job opportunity. 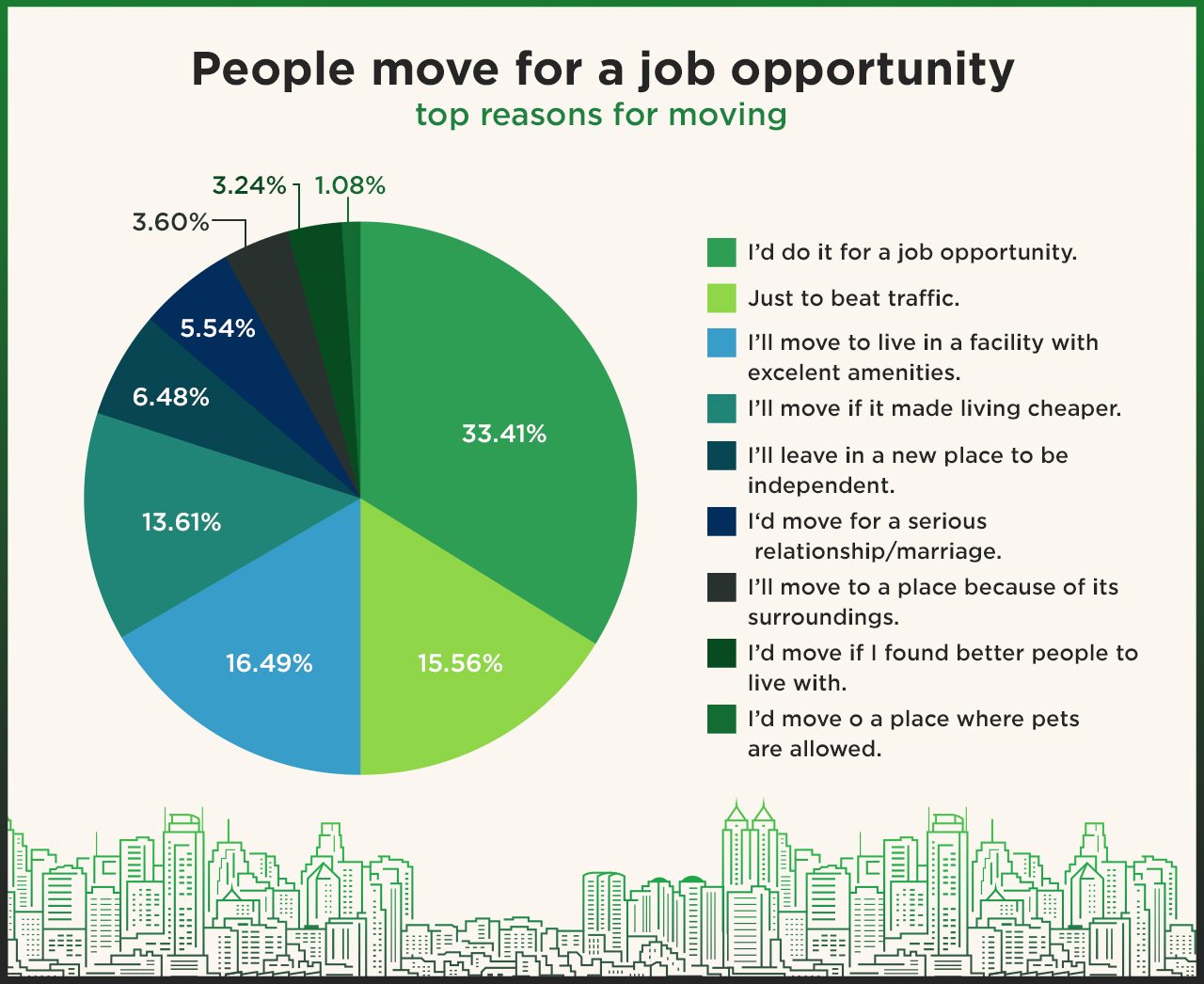 Tina, a radio jock, shares that she too was content living in her family home for so long. Originally from Quezon City, it was a job opportunity at Ortigas that got her packing her bags.

“I really had to move closer to my place of work since my show is early in the morning. This new place is literally a 5-minute walk away.”

Tina loves her newfound independence. Though “adulting” can be a challenge at times, she’s thriving and still feels that overall it’s been a great experience.

Her success story is one many dream of having — a new job, beating traffic, independence. But you can’t just get to tick off all these boxes by merely moving. And many perceptions don’t align with reality.

Are bustling hubs really worth it?

With jobs as the main push for many to move to a new place, most think BGC, Makati, and Quezon City are the way to go.

This is supported by The Nerve’s study, which says 25.6% of respondents would prefer to work at BGC. Yet, these same people would rather live in Quezon City. But do you have to travel this far for a job?

What many don’t realize is that 4 out of the top 10 employers in Jobstreet’s 2017 survey all have offices in Ortigas. Given its location, Ortigas serves as a more ideal workplace if one chooses to live in Quezon City.

However, even as a place of residence, Quezon City may not be the best option, especially when you consider traffic.

Given that 16.56% of respondents consider moving to beat traffic, it’s ironic that many choose Quezon as their top place of residence.

The same goes for Makati.

Makati, Quezon City, Taguig (where BGC is located) turned out to be some of the world’s worst places for traffic based on a study by Waze. The three all tied with scores of 3.9 — the third lowest given among cities studied worldwide.

And yet, respondents who chose “just to beat traffic” as their top reason for moving, select these three cities (Makati, Quezon City, and Taguig) as their ideal place of living. In a 2017 study by the Boston Consulting Group, Metro Manila commuters spend an average of 66 minutes stuck in traffic daily. Who wants to go through this every day? In fact, the top factor for those who prefer Quezon City is affordability (17.95%). But choosing to move to Quezon City is not wise when the majority of private offices are located in other cities like Ortigas. Cost of transportation, loss of time, and negative effects on health are already too much of a price to pay.

Makati is also the most expensive place to own a property in Metro Manila.

Being practical is about making decisions that maximize the benefits of what you have.

And those who are most practical are the ones who can still afford to indulge once in a while. Even while prioritizing costs, a lot of people still value the finer things in life. They would still choose a place where they can enjoy food and go shopping.

But going about Metro Manila takes time and effort — resources millennials don’t have enough of. So what’s the solution?

Live in a place where the jobs and all the other things we need in life are within reach.

Ortigas is a central hub where cities like Mandaluyong, Pasig, and Quezon City meet. It is a bustling district of business offices, food hubs, and residential areas.

It’s near three MRT stations – Boni, Shaw, and Ortigas, it has multiple bus and shuttle terminals, and routes connecting to major roads like C-5, EDSA, and Shaw Boulevard.

It’s not surprising that more and more are flocking the area. It’s gaining a reputation as a lifestyle center with seven malls and prime recreational spots like the Meralco Theater and the Ortigas Park.

So, the next time you’re planning to move, check your criteria and ask yourself first if your ideal place fits the mold. — Rappler.com

Note about our surveys:

This survey was conducted by The Nerve, a data insights company, in partnership with Rappler. In our surveys, mathematically, we aim for at least a 95% confidence level with a 5% margin of error, representative of the population the survey can reach. Even then, there are limits to the veracity of the surveys we conduct and write stories about. These surveys are not incentivized and are given only to readers who visit the site when the survey is being served.