A history of the BPO industry in numbers Facebook Twitter Copy URL
Copied
It’s one of the most lucrative, fastest growing industries in the Philippines. Here’s how far it's come

MANILA, Philippines — One of the most robust sectors in the Philippines right now is the information technology and business process outsourcing (IT-BPO) sector. More than just a lucrative enterprise, the IT-BPO sector has also proven to be the largest and fastest growing industry in the country. There is no denying its major role in providing quality jobs and encouraging economic activity and investment even in areas outside Metro Manila.

Of course, the IT-BPO industry was not an overnight affair. Credit is due to the handful of individuals who saw the potential in the business in its early stages. Among them are the likes of Rainier “Bong” Borja, who is often regarded as the most articulate voice of the Philippine BPO industry; Karen Batungbacal for her early involvement and series of contact center firms; and Secretary Mar Roxas, who, during his tenure as secretary of the Department of Trade and Industry, saw the potential of the industry, reached out to key leaders to promote foreign investment, and helped shape the landscape of BPO into what it is today.

In fact, one of the key contributions Mar Roxas made to the BPO industry was lobbying in congress to revise Republic Act 7916, so that buildings or floors in buildings could register as an ecozone. That meant that the budding BPO industries were exempt from paying national and local taxes, and only had to contribute 5% of their gross income as tax — a major enabler during that time.

Another significant but unexpected contributor to the BPO industry was Bill Gates. He donated Microsoft Apps Licenses to the PCPS program, which not only saved the government huge expenditures, but during the critical, early stages, it also enabled the BPO industry to function and thrive.

In order to celebrate how far the Philippines has come, we’ve created a timeline of the BPO industry’s milestones in numbers. See how the IT-BPO sector transformed from a single contact center to the industry monolith it is today. 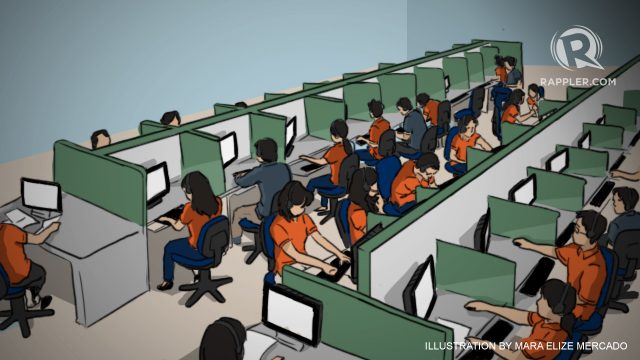 1992 – Frank Holz, under the Accenture group, created the first contact center in the Philippines

2001 – PeopleSupport, a US-Based outsourcing center, restructured their business, and moved their operations to the Philippines, providing 8,400 jobs

2005 – The Philippines gained 3% of the global BPO market, which accounted for 2.4% of the country’s GDP

•This improved the Philippine domestic economy by 5.4%

•11,000 people were employed across North America, Europe, and Asia

2010 – The Philippines was declared the world’s BPO capital!

•The country continues to become an attractive location for foreign investor

2012 – The BPO industry grows even further