Rappler wins in the Save the Children Media Awards 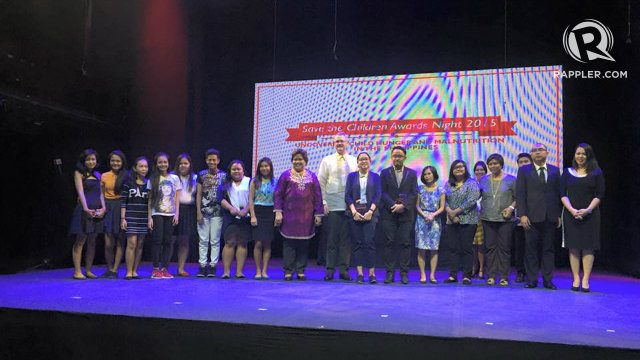 Save the Children is an international independent organization pushing for children’s rights. The competition is part of #LahatDapat, the organization’s biggest campaign against hunger and malnutrition.

With an average score of 92.67%, Fritzie Rodriguez‘s story, “Plenty of food, little nutrition in Benguet,” was recognized as the “Most Outstanding Article.” The story looks at the lives of townsfolk in the highlands of Atok, while also trying to break the myth that shortness is always linked to genetics. It investigates how poor diet diversity leads to child malnutrition and other long-term health impacts.

The jury was comprised of media professionals and academics from the University of the Philippines, as well as Assistant Health Secretary and National Nutrition Council Executive Director Bernie Flores.

Garnering 22.54% of online votes, David Lozada‘s “National survey: We have many malnourished children” won the “People’s Choice award.” The story highlights how Filipino children are suffering from acute malnutrition and how mothers from the grassroots are trying to solve the problem.

Rappler’s animation We Can Stop Hunger received a Special Citation for “Outstanding Online Video Feature Award.” The video, animated by Tom Estrera III and narrated by Patricia Evangelista discusses the global situation of hunger and malnutrition and how collective action can help end these problems

Meanwhile, Jodesz Gavilan and George Moya made it as finalists in the outstanding article category. Moya’s “Food prostitutes, death by hunger, and a feeding program” looks into a Laguna town’s alleged sex-for-food system. Gavilan’s “Is the minimum wage enough for a day’s worth of nutritious meals?“ looks into the gap between the food budget and expenses among “food-poor” families.

With an average score 93.33%, Veejay Villafranca’s “Silent Emergency” won as the “Most Outstanding Photo,” while “Mangaon Ta” by Frances Mae Canda won the “People’s Choice Award” with 26.77% of online votes.

Rodriguez and Moya also made it as finalists for the “Most Outstanding Photo” category.

In the Philippines, malnutrition remains a big problem. According to Save the Children, there are 2.7 million Filipino children experiencing hunger due to lack of food and extreme poverty.

To further this advocacy, Rappler has its special section called the #HungerProject, an online platform for meaningful discussion and informed action on how to end hunger and address poverty in the Philippines. It houses a wide array of multi-media articles on the importance of collaboration and efforts of different sectors in achieving zero hunger. – Rappler.com