August 14 assembly vs Marcos burial: What to expect 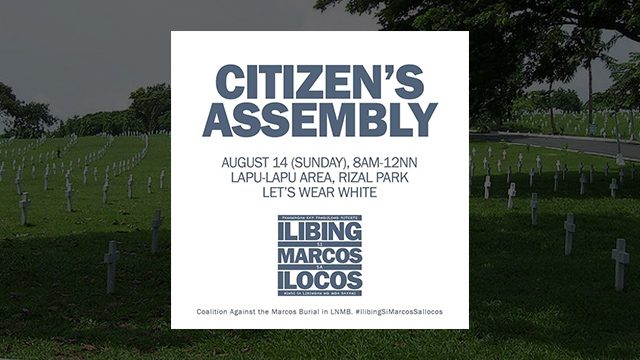 Facebook Twitter Copy URL
Copied
The rally in Luneta, from 8 am to 12 noon, is meant to urge President Duterte to withdraw his decision allowing a hero’s burial for dictator Ferdinand Marcos

MANILA, Philippines – A coalition of various groups from different sectors and political parties will hold a protest rally against the burial of the late President Ferdinand Marcos at the Libingan ng mga Bayani (Heroes’ Cemetery).

The “Citizens’ Assembly” Facebook Page, which spearheads the activity has invited more than 30,000 people to the “peaceful protest.”

If you are interested in participating, here are the things you need to know:

REMINDER: Bring umbrellas since rainfall is expected. Organizers said they are pushing through with the event, rain or shine.