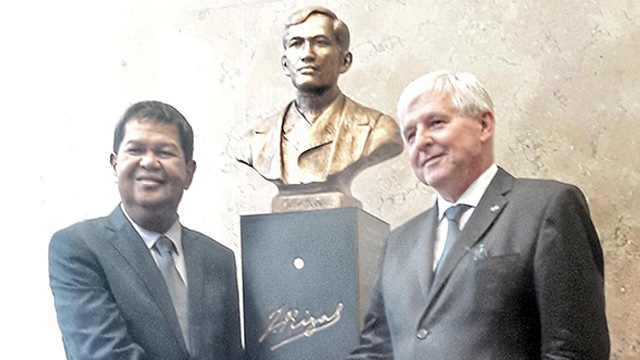 This is a press release from the Embassy of the Czech Republic.

After 131 years, the Philippines’ National Hero Dr. Jose Rizal, returns to Prague. Rizal’s bust was created by Filipino sculptor Jose Giroy, apprentice of National Artist Napoleon V. Abueva. It was unveiled at the foyer of the Czech National Bank headquarters.

Rizal’s [bust] return to Prague was the brainchild of Czech National Bank Vice-Governor Vladimír Tomšík, who teamed up with Czech Ambassador to the Philippines Jaroslav Olša, jr., with an aim to commemorate Rizal´s visit to Prague in 1887. He [Rizal] then traveled around Europe alongside his friend Máximo Viola. Before coming to Prague they spent four days in Litoměřice (Leitmeritz) where they met Rizal’s closest collaborator, mentor and friend, Ferdinand Blumentritt. Afterwards, Rizal and Viola spent a few days in the Czech capital touring the city, meeting scientists, such as botanist Heinrich Willkomm, with whom Rizal later on collaborated during his exile in Dapitan. While in Prague, they stayed in Hotel Modrá hvězda (Blue Star), which was later demolished to give space for a new building of a national bank headquarters.

As Czech National Bank stands opposite the famed Art Nouveau Municipal House and the gothic Powder Tower which can be seen at the beginning of the Royal Route at the Square of the Republic, Rizal´s bust can now become another must-see spot for Philippine tourists to appreciate Rizal’s shared history with Prague.  Truly, many tourists will get more than what they came for dose of history in this famed European city. – Rappler.com/Press Release