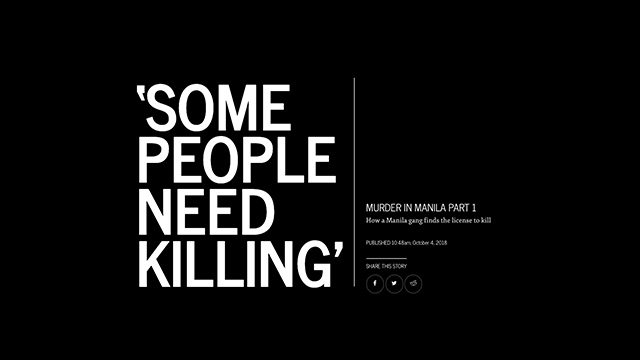 The series was published daily for a week beginning October 4, 2018, with the story “Some People Need Killing.” It investigates the local chapter of a vigilante gang in Tondo, Manila, whose members had been arrested for murdering drug suspects and small-time criminals, including a 16-year old boy.

Rappler’s 6-month investigation showed strong indications that the police were outsourcing extrajudicial killings to Chapter 2 of the Confederate Sentinels Group in Tondo, a group of force multipliers they had also accused of murder.

One of the judges in the Human Rights Reporting category said of “Murder in Manila”: “This is an exceptional work of investigative journalism that reveals through a strong network of inside sources a definitive link between the Philippines police and mercenaries labeled as ‘vigilantes’ that kill in the name of the government’s drug war.”

A judge in the Investigative Reporting category described the Rappler piece as “brave, tenacious and granular investigative reporting into how Philippines President Duterte’s war on drugs was carried out, through the eyes of those who pulled the trigger on addicts, while getting backroom bribes from dealers.”

“This is the kind of reporting that reminds a reader why the free press is vital to a democracy,” the jduge said. – Rappler.com