Ressa on Canadian Journalism Tribute: ‘Our only weapon is to shine the light’ 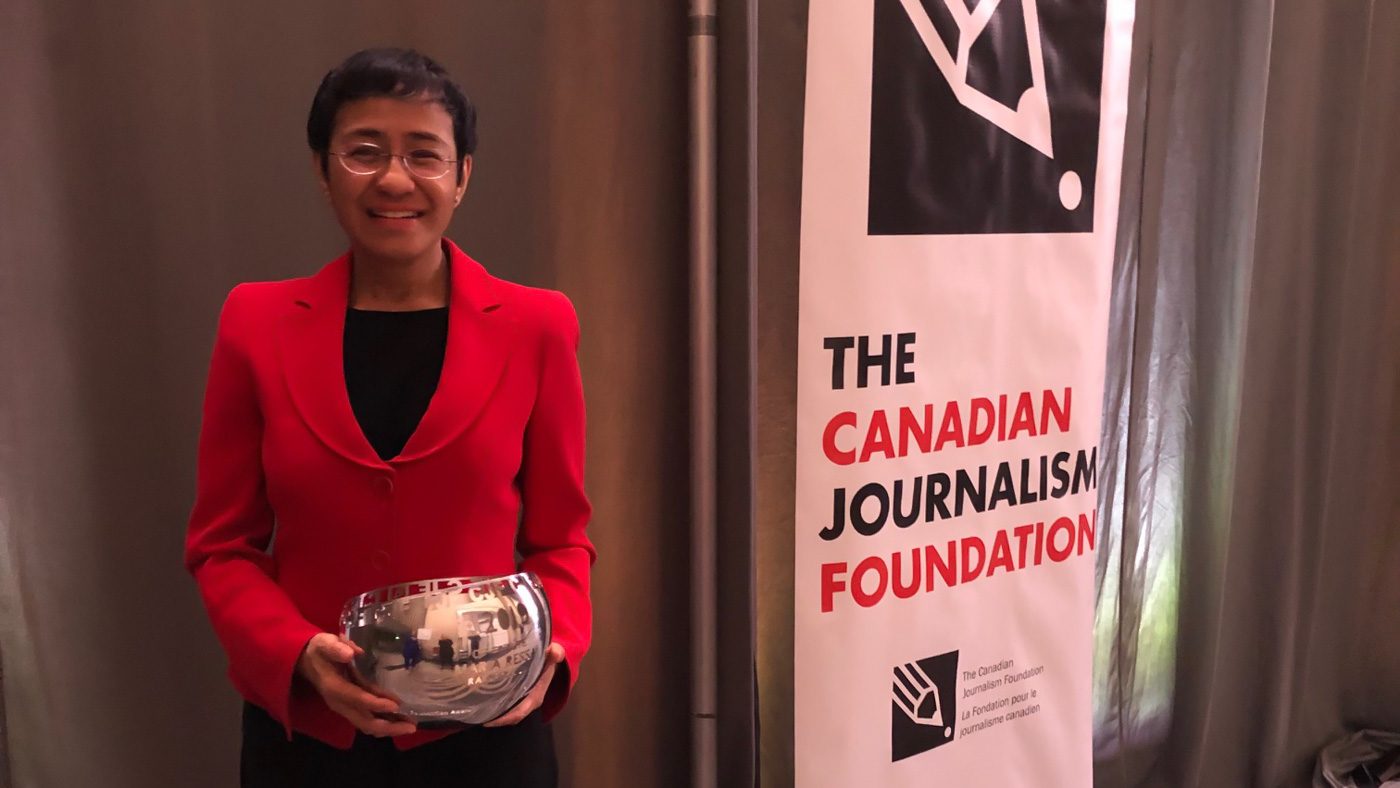 TORONTO – Saying the world has now been “turned upside down” by the phenomenon of fake news and the weaponization of social media, Rappler CEO and executive editor Maria Ressa urged citizens to “demand that we find a vaccine that will stop this virus of lies from spreading.”

Fake news is “a virus that is taking over our body politic, that is weakening our democracy,” Ressa told Canadian editors, media executives, and reporters during the annual Canadian Journalism Foundation (CJF) Awards Gala at the Fairmont Royal York Hotel on Thursday, June 13 (Friday morning in Manila), in Toronto.

A visibly moved Ressa held back tears when she came onstage to accept the award, which recognizes “a journalist who has made an impact on the international stage,” and was met with a standing ovation and prolonged applause.

Ressa was honored for her “courage and conviction in holding the powerful to account, for upholding the press freedom democracy depends on” and, according to Kathy English, public editor of the Toronto Star, for her “powerful defense of truth in the face of daunting obstacles, including threats to her life.”

The other awardees are Martin Baron, executive editor of the Washington Post, and John Honderich, chair of Torstar Corporation.

In his acceptance speech, Baron cited Ressa for her “courage and persistence,” and asked journalists to “stand beside her, behind her every step of the way.”

The CJF noted how “Ressa has been targeted – jailed and then released on bail – for what many see as payback for her coverage and criticism of the Philippine government’s extrajudicial killings as part of its war on drugs and its attempts to silence the free press.”

Ressa and Rappler’s board directors and staff face 8 court cases aside from 3 pending investigations. (READ: List of cases vs Maria Ressa, Rappler directors, staff since 2018)

“You make me emotional,” Ressa said, adding that the award was for the Rappler staff who were watching as she livestreamed the event. “This isn’t mine, it’s yours,” she said in a quavering voice. “You don’t know all their names, but they inspire me — for every story that holds power to account, for every day that we survive, for every time we avoid cynicism.”

Ressa explained how “the exponential attacks and lies on social media” have been  happening in the Philippines. “It’s bottom up, astroturfing. It’s also lateral. It’s transfused into media that’s been coopted by the state,” she said. “Our state media proudly says they work with RT and Sputnik and the Chinese state media.”

The attacks on Rappler and other journalists have also come straight “out of power,” from the mouth of Philippine President Rodrigo Duterte himself, said Ressa.

She spoke about the “systematic attacks” against other journalists, citing the most recent incident involving 61-year-old Davao journalist Margarita Valle who was arrested on June 9 and released 12 hours later.

Police said it had been a case of mistaken identity, but Ressa noted that Valle is an outspoken journalist and human rights advocate.

“So what do we do? We document it. We document it all,” she said. “Democracy dies in darkness, it really does. Our only weapon is to shine the light and we do that with your help. So thank you for helping us.”

Ressa said it was Rappler’s duty to let the world know about the extrajudicial killings resulting from the Duterte administration’s war on drugs. To not speak or report about the killings would have meant consent to the “unspeakable violence and impunity,” she said, adding that UN estimates now put the number of victims at a staggering 27,000.

But, Ressa said, fighting for the people’s right to know carries consequences in the Philippines.

The Duterte government has filed 11 cases and investigations against Rappler. In a little more than 3 months, Ressa said she’s had to post bail  8 times; she was arrested twice in a five-week period. “I paid more bail than Imelda Marcos. But she’s been convicted,” she quipped, drawing laughter from the crowd.

As much as she wants to experience life to the fullest, the 55-year-old Ressa said, “getting arrested is something I wish I could have done without because through all these, my only crime is to do what I’ve always done in more than three decades – my job; it’s to speak truth to power.”

Saying journalism is under attack worldwide, Ressa said it’s “a curse and a privilege to be a journalist” today.

“The mission of journalism has never been as important as it is today,” she stressed, noting the “insidious manipulation of democracy not just in the Philippines, but around the world.”

The proliferation of disinformation and manipulation of the public through social media is “a global problem,” said Ressa. She said the number of countries that have rolled back democracy through “cheap armies in social media” has doubled from 24 in 2017 to 48 in 2018, citing studies conducted by Freedom House and Oxford University.

“It’s clear that not one industry or nation can solve this problem. Local is global and global is local – that’s the consequence of having these social media platforms that unite – a lie told in one country travels to another,” she said, noting that WhatsApp and Facebook have a combined audience of 2.7 billion worldwide.

“The social media tech platforms have taken over the distribution of  news,  but the biggest problem is they failed to take over our gatekeeping powers,” said Ressa. “We spent our careers on standards and ethics, on honing these. Machines can’t replace that yet, did you notice?”

The dilemma these days, she said, is how to harness new technology without having it upend democracy and privacy.

She cited how Toronto has been grappling with the proposal for Sidewalk Labs on its Waterfront, which would make use of smart technology and advanced data analysis. Sociologist Soshana Zuboff has dubbed Sidewalk Labs “surveillance capitalism,” she said, referring to her book.

At the same time, she added, “if you shut this experiment down, you give up the ability to actually create something new. You can’t experiment with the world of infinite possibilities that this new technology has brought. How can we create our future if we don’t experiment.”

What can be done? “I have no solutions,” a smiling Ressa acknowledged, which drew laughter. “The only thing we cannot do is to stand still.”

The battle for truth in today’s world “requires courage not just from the journalists, but from all of us,” she said.

It also means not giving up, she said. “This is a world where everything is changing as we move forward. Things can really be bad now, but we’ll walk through it and come out the other side.”

People cannot be cynical, she added. “The power to destroy, the power of hate, this politics can destroy everything. But it cannot build. In order to build, we have to pull from faith, hope, and love. We need to look to our humanity to do that.”

Ressa ended her short speech by asking Canadians to “please help us hold the line.” – Rappler.com