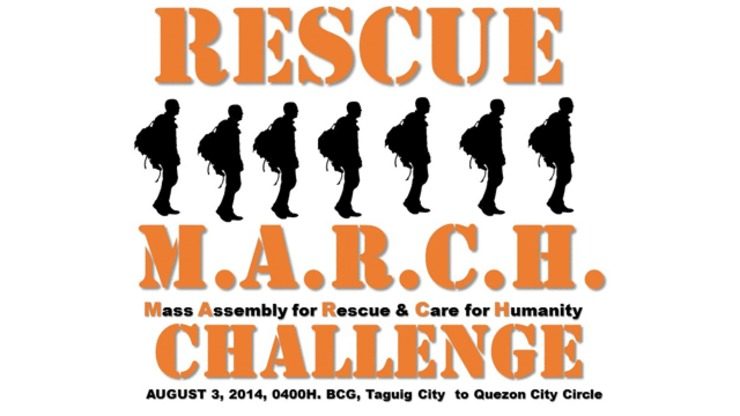 Facebook Twitter Copy URL
Copied
The first Mass Assembly for Rescue and Care for Humanity Challenge will be held on Sunday, August 3, at 4 am

MANILA, Philippines – The first RESCUE MARCH (Mass Assembly for Rescue and Care for Humanity) CHALLENGE will be held on Sunday, August 3, at 4 am.

Participating rescue squads (7man-squad) are required to be dressed in their respective rescue uniforms with PPEs (personal protective equipment), rigged with backpacks and other life-saving gadgets. They are also expected to be self-contained during the march by carrying their own water and food provisions. The event will end with a camaraderie breakfast at the target area in Quezon City Circle.

This is a simulation response-exercise to a magnitude 7.2 earthquake scenario in Metro Manila that assumes breakdown of basic infrastructure in which rescuers have to travel on foot with their rescue equipment.  This is not a competition but rather a collective assessment of the response capability (individual rescuer physical endurance/unit capability) of each rescue unit and the inter-operability of different rescue organizations in the National Capital Region (NCR).

For inquiries, you can reach ORANGE HELMETS lead convenor Martin Aguda, Jr at (0917)8098088 and martin.aguda@gmail.com. – Rappler.com