MANILA, Philippines – Whoever thought that getting a caffeine fix while celebrating the beauty of art is possible?

The Coffee Bean & Tea Leaf showed that this is more than possible, hosting an exhibit called “Brewfinder” at the ground floor lobby of Greenbelt 5, Makati City, early this month.

“Brewfinder” introduced a pair of firsts to the public: a first look at photographer Tom Epperson’s latest works, and a chance to sample and purchase CBTL™, the country’s first single serve beverage system.

Dealing with the unpredictable

The week-long event displayed Epperson’s “Smoke” series, a set of 6 images brilliantly captured over solid backgrounds. With his latest works on ice and photomontages, “Smoke” follows his trend of working with uncontrollable mediums.

“I like the idea of surprise,” says the first Manila-based photographer in a press release. “It’s magic. This is the same feeling I get when working with smoke.”

Born in the U.S., Epperson has called the Philippines his home and photographic scenery for the more than two decades already.

He is the first photographer to have had a solo exhibition at the Ayala Museum, and the first from Manila to get invited to do an exhibit at the world-famous Chelsea gallery districts in New York. First of its kind

Finding common ground with Epperson’s innovative creations is The Coffee Bean & Tea Leaf’s CBTL™. Developed by the Caffitaly System, the one-click beverage brewer brings the best of the California-based coffee shop right in the homes of the drink aficionados.

The CBTL™ combines the finest Italian technology and design to produce “the future of coffee and tea.” It makes it possible to enjoy more than 70 varieties of The Coffee Bean & Tea Leaf signature beverages with a single touch, including non-caffeinated ones like juices and cocktails, as were served during the “Brewfinder” launch.

“The same flavor, taste and consistency that you expect from any hot drink you purchase from our stores are what you get from the machine,” says The Coffee Bean & Tea Leaf Philippines President Walden Chu in a press release. “One perfect cup, with just a single push of a button.”

The CBTL™ Single Serve Beverage System set will be available at a discounted price in all succeeding Taste Series events. The set, valued at P25,000, which contains a CBTL machine, milk frother, sampler capsules and premium coupons, can be purchased at the events for only P14,950. 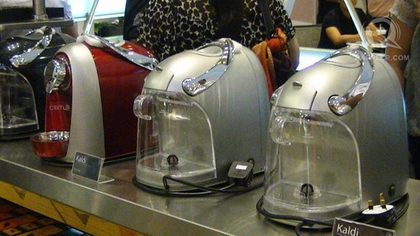 “Brewfinder” is only the first of The Coffee Bean & Tea Leaf’s Taste Series, a multi-pocket event series highlighting the CBTL™ system. Starting with photographers in its pilot installment, the Taste Series aims to reach out to other hobbyists in other fields of interests as well.

“It’s all about gathering people with different tastes and getting them to enjoy our coffee and tea,” said Cecil Castigador, PR & Communications Manager of The Coffee Bean & Tea Leaf. “Here, they can try out the CBTL and talk about their interests at the same time.”

According to Castigador, the next part of the coffee shop’s Taste Series will run next month, and will feature “something entirely different.” Details will be posted on their official Facebook page. – Rappler.com