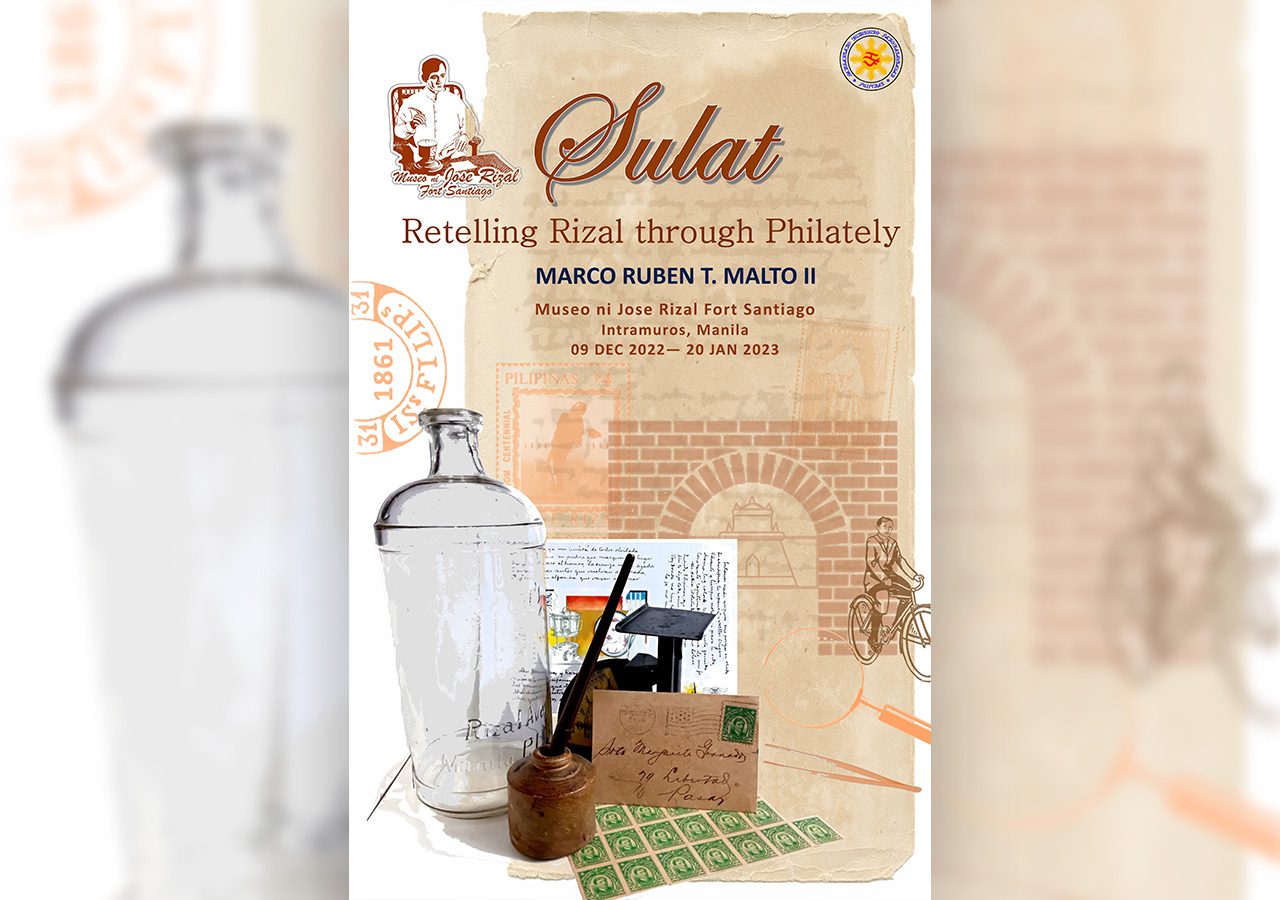 Facebook Twitter Copy URL
Copied
PRESS RELEASE: Did you know? Jose Rizal is the only Filipino whose life story can be told through postage stamps!

University of the Philippines Fine Arts professor, painter and philatelist Marco Ruben T. Malto II undertakes to revisit the life and legacy of the foremost Filipino hero within the realm of philately in his solo exhibit titled “Sulat: Retelling Rizal through Philately.” In partnership with the National Historical Commission of the Philippines through Museo ni Jose Rizal Fort Santiago, Malto curates his personal collection featuring philatelic items, artifacts, and archival materials to commemorate Jose Rizal’s 126th Death Anniversary this December.

Think of our most revered Filipino patriot Jose Rizal as a TikToker creating POVs on his travels, or talking about our Spanish colonial conditions and his aspirations for la Patria mia! Can you imagine his firing squad footage going viral? How would cancel culture deal with his highly controversial views?

Even in the absence of the internet and social media platforms during his time, Jose Rizal was every bit a blogger, a celebrity, a content creator and an influencer with a massive following. Instead of posts, tweets or video uploads, Rizal shared his ideas, and ideals, through his most notable novels, Noli Me Tangere and El Filibusterismo, his socio-political essays published in La Solidaridad, and his countless other writings that resonate with Filipinos. As National Artist Nick Joaquin once wrote of Rizal’s influence while still in his teens, “Already, what writings of his reach the public are stirring up storms.” Rizal, a diligent diarist and prolific correspondent, covered topics from cholera to lottery when not discussing duty to country or complaining about high cost of postage stamps in his letters sent to family, friends, lovers, and compatriots. Whether on overseas sojourn or in exile, Rizal was able to mail his crucial correspondence due to the already established postal system in the country during his time.

As the most documented Filipino in the 19th century, Rizal’s written works and treasured mementos were duly preserved, allowing future Filipinos to discover the makings of the most prominent advocate for Philippine reforms during the Spanish regime, and the nation he fought for. The extensive record of his life firmly seals Jose Rizal’s “national hero” stature in Philippine history, and his legacy continues to inspire generations of Filipinos, 126 years after his execution.

Jose Rizal is also the only Filipino whose life story can be told through postage stamps that his depiction in numerous Philippine stamps earned him the philatelic distinction as “the first and the most frequently featured Filipino in Philippine postal history.”

The “Sulat: Retelling Rizal through Philately” exhibit opens on December 9, Friday, 10 am at Silid Pamana of the Museo ni Jose Rizal in Fort Santiago, and will run until January 20, 2023. This philatelic exhibit highlights how unpacking the history of the country’s postal system and the evolution of Philippine philately makes a fascinating way to remember Jose Rizal for philatelists and non-philatelists alike.  Through the exhibit, Malto hopes the viewers will come to realize how “the study of postage stamps and postal history” can make learning and understanding history more compelling and engaging, even in the time of TikTok. – Rappler.com