MANILA, Philippines – A 1959 Porsche convertible made of rattan; gold earrings dating back to the 10th century; and wooden clutches made by the indigenous Wayuu of Colombia.

Those are some of the products showcased at the Asia-Pacific Economic Cooperation (APEC) International Media Center (IMC) in Pasay City.

The IMC has been the hub of over 2,000 local and foreign journalists since the APEC’s high-level meetings and other key events started on November 12. 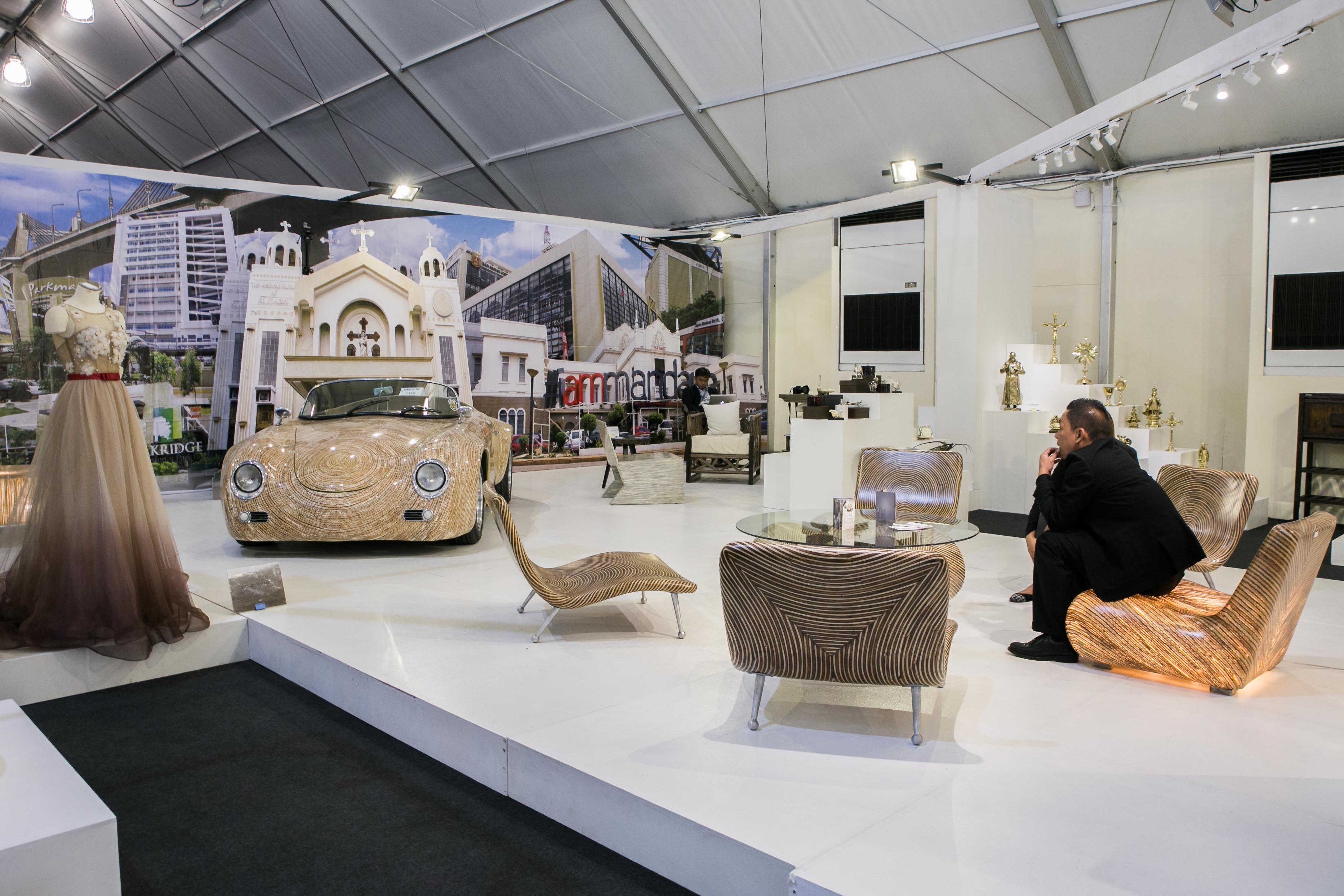 Although these are not your traditional souvenirs, at the heart of these innovative goods are qualities that make them Filipino. Here are 4 of the MSMEs featured at the exhibit in IMC. Maria Angelica, who has been collecting jewelry for 30 years, sells pieces of history encased in gold.

The items are delivered to her as bits of gold antiques, which she designs and sends to craftsmen who turn them into necklaces, rings, and lockets.

“I wanted it to be relevant and close to people, even to the youth, so they can wear something of value. So we try to make it rich, more accessible to people by putting it on their necks. Putting our culture on their necks, close to them. Hindi na siya [nasa] museum lang.” (It’s no longer just displayed inside a museum.) One of her oldest jewelry is a pendant from the pre-colonial times, dated around the 10th to 12th century. Placed inside a glass case beside the gleaming rings is another interesting find: irregularly-shaped and slightly tarnished silver coins called hilis kalamays, which were used as currency during the Galleon Trade. As payment for their goods, buyers used to chip off a portion of the coin, with the size depending on the value of their items. Much like Maria Angelica, Basket Case strives to make Filipino culture more accessible to people, especially to those who cannot afford much.

Founder Gigi Phua-Lim, who started as an art collector, believes that paintings should be part of everyday life, not only exhibited inside a museum. With the permission of several artists whose pieces she had bought before, she reprinted their paintings onto bags. “We want everybody to see. If you wear it on you, it’s like a walking advertisement for Filipino artists,” Phua-Lim said.

Most Filipinos turn a coconut husk into a bunot, which is used to shine floors. But Cocogreen utilizes coconut husks in a myriad of ways by converting them into gardening materials, coco fiber bales and nets, pet products, and mattresses.

Gardening products include pots made of coconut husks, which absorb water and allow plants’ roots to cling to the biodegradable material. This requires less water and helps plants grow faster. Coco fiber bales and nets mitigate soil erosion, and are used to introduce vegetation to an area.

Apart from gardening materials, coconut husks are also used as raw materials for pet products. Scratch towers and ramps for cats are assembled in the Netherlands before being exported back to the Philippines, while their mattresses, handmade by Filipino farmers, are lined with a layer of coco fiber. It is said to be therapeutic since it relieves pressure on the spine. The vibrant colors are what will first catch a passer-by’s attention.

Easily mistaken for designs from Baguio, one would be surprised that the bags were actually made by the indigenous Wayuu of La Guajira, Colombia. Calima founder Claudia Hernandez, who is of pure Columbian descent, has been living in the Philippines for 21 years now with her Filipino husband. Calima also sells jewelry inspired by Colombian designs and patterns. Ranging from P500 ($10.62) to P2,000 ($42.48), all the pieces are plated 24-karat gold, nickel-free, and made of semi-precious stones from both Brazil and Colombia.

Although made in Colombia, Hernandez believes that her merchandise also contain a Filipino touch. According to Hernandez, Colombian and Philippine goods have a lot in common, and she strives to make that evident in her products. Mochilas’ designs are reminiscent of the patterns of weaved cloth found in Zamboanga and in Baguio.

The gold jewelry she sells also resembles that of the pre-colonial golden artifacts displayed at the Ayala Museum. The purses she makes, although their designs are distinctly Colombian, are mixed with Filipino materials such as mother of pearl, kamagong wood, and raffia.

Likewise, she brings Filipino goods such as pearls back to Colombia, which are designed into jewelry and exported back to the Philippines.

“What I bring from Colombia into the Philippines is part of my cultures…. I also want to bring to the Philippines so they know a little bit more of what is Colombia, what is there, and what we have in common here,” she said. The global chain and its local impact

The businesses that participated in the IMC exhibit are MSMEs (micro, small, medium enterprises) that constitute 99.58% of about a million businesses in the country, based on statistics released by the Department of Trade and Industry in 2012.

MSMEs are also at the center of APEC 2015’s agenda. (READ: Real work to help small businesses begins after APEC) One of the reasons why APEC countries are focusing on MSMEs is to help them integrate in the digital, global economy.

“It’s now very easy for them to integrate in the global value chain without going out of their homes or their shops,” said Deputy Presidential Spokesperson Abigail Valte. “By making sure they’re connected to the Internet, they can now sell their wares to the rest of the world without leaving their homes.”

She added that collectively, the average growth of each APEC economy is about 8%. If non-trade and trade barriers are removed, there will be freer movement of goods with possible minimum costs involved. MSMEs usually help the underprivileged by employing communities for labor, which then receive part of the businesses’ profit. (READ: Making region MSME-friendly could be APEC 2015’s success)

In a forum at the University of the Philippines-Diliman on November 13, Kilusang Magbubukid ng Pilipinas (KMP) leader Rafael Mariano said, “As if the removal of economic barriers and decades of unfair competition and trade liberalization are not enough, APEC will ensure non-border measures that will assure more benefits and incentives for foreign investors at the expense of the people.” (READ: Is Trans-Pacific Partnership friendly to small businesses?) But most of the MSMEs featured at the IMC see competition as a challenge, not a drawback.

“We welcome that aspect of free trade because it will force our manufacturers to innovate and be better….Competition will always bring out the best in everyone,” said Ian Fresnido, the communications manager of the Office of Strategy Management of Mandaue City, which also exhibited its local products at the IMC.

Phua-Lim echoed that sentiment: “It should benefit most of us if we are confident with our quality. Any open-door policy will bring competition as well. We must make sure at our end that we’re confident enough to be playing on the same field.” – Rappler.com