Aug 30, 2012 10:08 AM PHT
Facebook Twitter Copy URL
Copied
The country maintains its strong position as one of the fastest growing economies in Asia MANILA, Philippines (UPDATED) – The Philippine economy grew by 5.9% in the second quarter, cementing the Philippines’ strong position as one of the economies in Asia and the world to watch.

The second-quarter growth is slower than the 6.3% in the first (revised from 6.4%), but it still exceeded analysts’ and even government’s expectations, which averaged 5.4%.

With this, the first semester growth reached 6.1%, one of the world’s fastest and most attractive.

Finance Secretary Cesar Purisima said the Aquino administration is confident the economy will reach the higher end of the government’s 5% to 6% target for 2012.

The main contributors to the overall 5.9% performance from April to June were: The services sector — BPOs and tourism and wellness activities, including hotels and spas — remained resilient, as it did in past quarters. This quarter, it was the main driver of growth, rebounding 7.6%.

The government remains keen on the economic benefits of tourism, which is being supported by the Departmetn of Tourism-led branding efforts under the campaign, “It’s more fun in the Philippines.”

Balisacan noted the surge of tourist arrivals “whose number already reached 2.1 million visitors for the first half of the year representing 11.68% growth.”

Also boosting the local economy was the government’s infrastructure spending, which grew a whopping 45.7% during the quarter.

Construction boosted industry sector with a 10% growth, a turnaround from a year ago when the government’s underspending contributed to the overall slowdown.

Balisacan stressed that aside from infrastructure spending, the government’s investments in social spending, particularly on the ongoing conditional cash transfer (CCT) program focused on alleviating the plight of those in the lower economic rung, also contributed to growth.

Agriculture was sluggish amid slow farm output, which was flat at 0.73% in the second quarter. Weighing on farm output were the slowdown in livestock production as well as conservation efforts of the government in the fisheries subsector.

Mining pulled down the industry sector’s growth by a negative 0.4 percentage point.

Two of the country’s main dollar earners were exposed to the fiscal-turned-economic crisis being experienced in the west.

Remittances from overseas Filipino Worker (OFW), which brings in about US$22 billion a year and remains the country’s main dollar earner, steadily increased but the pace of growth has slowed. 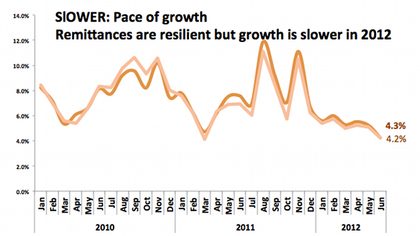 In the second quarter, benign inflation, which was still within the government’s 3% to 5% target, boosted consumption, a key driver of economic growth.

On the other hand, exports remained vulnerable to global woes. The second quarter performance came on the heels of experts saying the Philippines is now the bright spot in Asia.

The Philippines has maintained its position as one of the fastest growing economies in the entire region, third only to China and Indonesia. However, these gains were offset by the slowdown in the region’s behemoth: China’s economy slowed to 7.4% in the second quarter from 8.1% in the first.

However, he also agreed there are challenges ahead.

He explained that the typhoons that hit the capital and key agricultural regions will be felt in the third quarter, but the impact “will be modest.”

The typhoons left many Filipinos without homes, but the loss in property, particularly those in Metro Manila will be able to boost consumption spending.   The country’s capital accounts for a third of the country’s GDP.

“Another downside risk is the El Niño phenomenon, which according to experts will commence in the third quarter of the year until the first quarter of 2013. This type of El Niño, according to experts, will be weak to moderate. This will impact agriculture sector but this will be mitigated by our investment in irrigation,” said Balisacan.

He added the other downside risks to growth: slowdown in China’s economy, the continuing euro zone problem, and higher oil prices.

“In the light of these prevailing global economic conditions, risks to the external trade of the country have increased, although these could be cushioned partly by the increased diversification of our exports…The intensification of the Euro Area problem and the geopolitical uncertainty are also external risks, which can cause spikes in the world price of oil,” he said.

Balisacan expects growth in the next few months to be driven by a low base given that the third quarter last year posted the weakest growth in 2011 at 3.2%. – Rappler.com