Facebook Twitter Copy URL
Copied
More than 20% of Japanese men and women older than 65 still work, and this trend is expected to grow

TOKYO, Japan – Many people his age would be happy to slip on a cardigan and put their feet up, but not Teruo Sugiura.

The 86-year-old makes his way to a seniors’ work center in Tokyo several days a week where he repairs traditional Japanese sliding doors.

It doesn’t pay much, but that hasn’t stopped Sugiura from turning up for the last 20 years – one of millions of elderly Japanese still collecting wages into retirement age.

“I’m working to keep my body in good shape,” said Sugiura, a former sweets salesman at a high-end department store.

“I think it’s wrong not to be doing anything. There’s no point staying at home twiddling my thumbs.”

Japan’s silver-haired workforce is everywhere these days – from wrinkled men waving glow sticks at construction sites to checkout counter clerks or caregivers for the very old.

And this geriatric working class shows no sign of shrinking – more than 20% of Japanese older than 65 still work.

That is the highest proportion among developed economies and a figure likely to soar as the pool of younger workers falls and the fast-ageing population squeezes a strained social welfare system.

People over 65 are expected to account for nearly 40% of the greying population by 2060 as Japan wrestles with a low birth rate.

Meanwhile, the country’s labor force – the number of employed and unemployed people aged 15 to 64 – is at risk of losing more than 27 million workers in the same time frame, a drop of about 42% from current levels, according to a government advisory panel.

Demand for workers is high and Japan’s unemployment rate for January, published on Tuesday, March 1, was an enviable 3.2%, a two-decade low and well below the United States or many European nations. 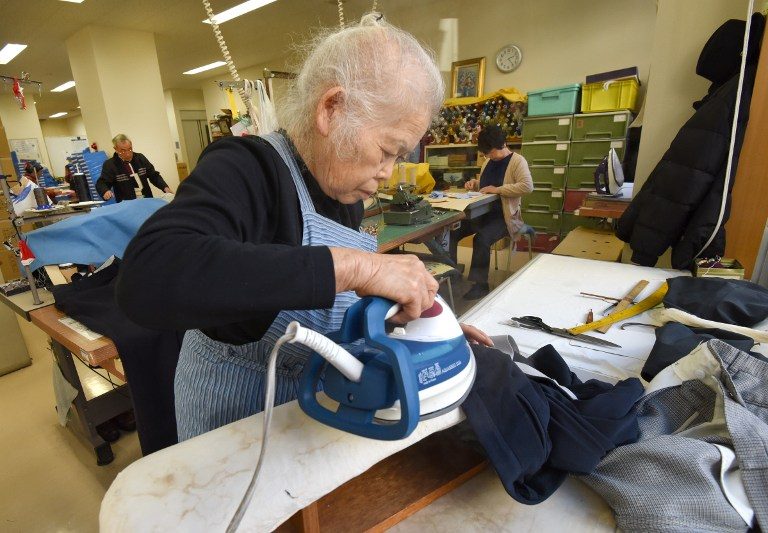 “This is enough incentive for (seniors) to push back their retirement and keep working,” investment bank Goldman Sachs said in a recent report on Japan’s labor market.

And Tokyo is putting the pressure on firms to keep workers on longer, or by hiring older employees.

Some firms have responded, including automaker Honda which has said it would raise its working age by 5 years to 65 starting in April, a move that could affect tens of thousands of workers.

Meanwhile, in northern Japan, nationwide convenience store chain Circle K Sunkus has trained a handful of elderly people in a nod to the ageing labor pool.

Electronics giant Ricoh has called on retired technicians to get its computers ready to be installed at companies, schools, and government departments.

“The drastic decline of the workforce will have a significant impact on the behavior of employers.

“Many are willing to boost the number of older workers, even at major companies, and I think this trend will continue – or even accelerate – in the future.”

Kondo’s government pension isn’t enough to let her do everything she wants.

“I’m saving the money I make here,” Kondo says, as she assembles packages for wrapping up high-quality salt sold at luxury stores.

“I’ll use it to buy presents for my grandchildren, or a sweater, or maybe just lunch for myself.”

The reasons for Japan’s elderly staying in the workforce vary, but keeping mentally and physically fit is key for many people.

It also puts some extra money in seniors’ pockets, although the wages paid by the Silver Centres are low – they pay an average of 37,000 yen ($330) a month.

Some seniors only get paid per task they complete while others volunteer their time without getting paid.

But for people like Taeko Mishima, the extra money could be a lifesaver.

The 74-year-old worries she and her husband’s pensions are not enough to cover the cost of nursing homes with medical care, which could add up to as much 300,000 yen a month, said Mishima, who formerly worked at a travel agency.

“My pension isn’t high enough to pay for that.” – Daniel Leussink, AFP / Rappler.com