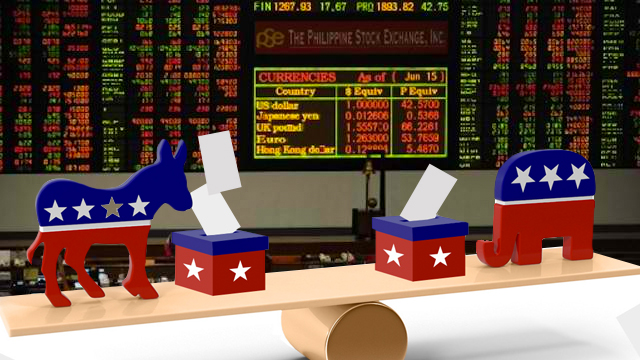 MANILA, Philippines – Stocks in the country fell sharply by 2.06% on Wednesday, November 2, playing “catch-down” with the rest of the region, as investors took fright mainly on signs that US presidential candidate Donald Trump had edged ahead of his rival Hillary Clinton.

“The PSEi played catch-down with the rest of the region after being shuttered for two days this week, falling by more than 2% after returning from an extended holiday,” Nicholas Antonio Mapa, an associate economist at the Bank of the Philippine Islands, said in an email to Rappler.

“Stocks fell sharply after returning to trading in hostile territory with the US election fever heating up, while concerns about possible hawkish comments from the Fed sparked a general risk off tone,” Mapa added.

“While the Philippine stocks were on a holiday, the US stocks went down last night, as investors sit on the sidelines, watching the developments [in the] US presidential elections,” Liu said in a phone interview.

Other than the upcoming US elections, the economists also cited speculations on the US Federal Reserve raising interest rates “sooner rather than later.”

“The US reported surprisingly robust 3rd quarter gross domestic product growth, which may convince the Fed to hike sooner rather than later, hurting emerging markets’ assets as well,” Mapa said.

On the local front, Liu said investors are waiting for “substantial political development and more announcements on projects and deals.” – Rappler.com