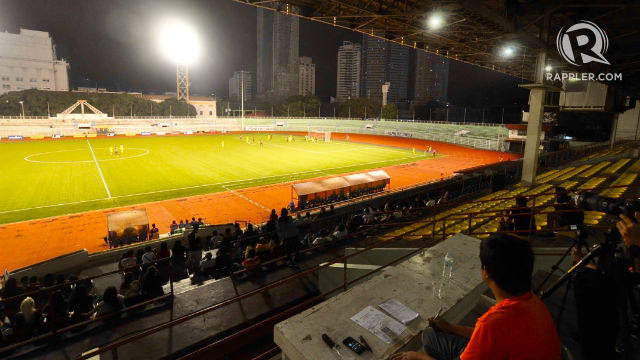 MANILA, Philippines – The group of port and gaming tycoon Enrique Razon Jr. has proposed to re-develop and modernize the 82-year-old Rizal Memorial Sports Complex (RMSC), which was destroyed during World War II but was able to host big events in its prime – the Far Eastern Championship Games and the Beatles concert, among others.

In a statement on Tuesday, December 6, the Razon group said it has been offering to re-develop the RMSC, which was originally built in 1934.

Destroyed during World War II, the Rizal stadium was reconstructed in 1953, and renovated in 2011.

Since then, the stadium has not undergone any structural and facilities improvements or upgrading, rendering it virtually unsuitable and unsafe for training athletes as well as holding local and international games.

Given that RMSC is a sports landmark and Filipinos love sports, “the Razon Group, in its preservation plan, will maintain as well as fortify the RMSC facade,” said Enrique Razon, who owns International Container Terminal Services Incorporated (ICTSI) and Bloomberry Resorts Corporation.

Rizal stadium is managed by the Philippine Sports Commission (PSC) and owned by the city of Manila. (READ: The bells toll for the Rizal Memorial)

Manila has had no income from RMSC for years now, leaving it with no funds to modernize facilities.

News reports quoted Manila Mayor Joseph Estrada as saying that the Razon group will undertake a plan to convert the pre-war Rizal Memorial Coliseum into a shopping complex.

But the Razon group clarified that the stadium’s facade and walls will be maintained.

“There is no cost yet. Ours is a proposal. It will be re-developed. Not [converted] into a mall as reported,” Narlene Soriano, ICTSI public relations head, said in a phone interview.

Within the walls and facade of Rizal stadium will rise “contemporary buildings that will house modern offices and commercial areas run by smart technologies, replete with modern amenities and green open spaces,” the group said.

For an undisclosed project cost, the Razon group said it will also build a sports museum inside.

“The business areas are expected to compensate for the expensive and meticulous process of restoring and preserving the RMSC facade,” the group said.

Transfer the stadium to Clark?

The PSC has been considering transferring the Rizal staidium to a different location, possibly Clark, in order to build the Philippine Olympic Village.

This new sports complex is seen to be larger and more modern, with training facilities for national athletes as well as facilities to host large sports meets.

“This is expected to happen when funding for the relocation is complete,” the Razon group said. – Rappler.com