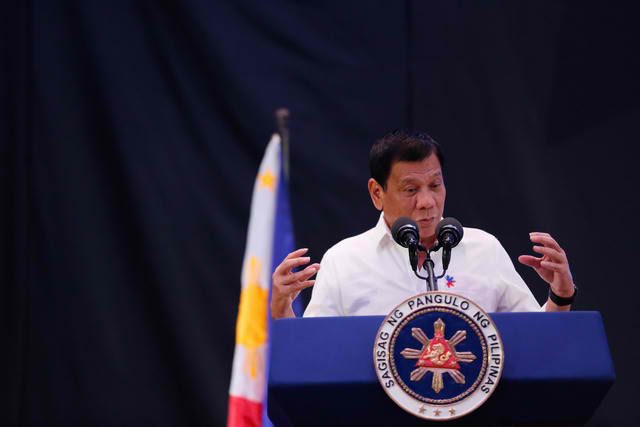 Facebook Twitter Copy URL
Copied
'I'm going to charge all of you there, criminally. I'll count one to three, and if you don't resign, I will treat you as a drug addict,' says President Rodrigo Duterte

“I’m going to charge all of you there, criminally. I’ll count one to three, and if you don’t resign, I will treat you as a drug addict,” Duterte said in his speech on Thursday, December 22, after signing the 2017 national budget.

“You guys there are all corrupt… I will bring you down,” he added.

Tetangco will complete his second 6-year term in July 2017.

“Tetangco is about to retire, better prepare there because I’ll give you a whack,” Duterte said.

This was the second time Duterte threatened AMLC and BSP officials. He earlier accused them of turning a blind eye to hidden wealth and allegedly contributing to a smear campaign against him during the 2016 polls.

“We have now the money laundering report. But I am warning again the central bank for the second time. It was not until I burdened at them during the NBI, National Bureau of Investigation anniversary and I was there. And I was told by the director that until now, there’s no report of this AMLA,” Duterte said on Thursday.

The President did not spell out what was in the report he was demanding.

The law prohibits AMLC from sharing any information with anyone else except under court order.

The fiery Duterte won a landslide election victory this year after pledging to kill 100,000 criminals to prevent the Philippines from turning into a “narco-state.”

From July 1 to December 20, there have been 6,180 deaths linked to the Duterte administration’s war on drugs, both from police operations and vigilante-style killings. – with reports from Agence France-Presse/Rappler.com