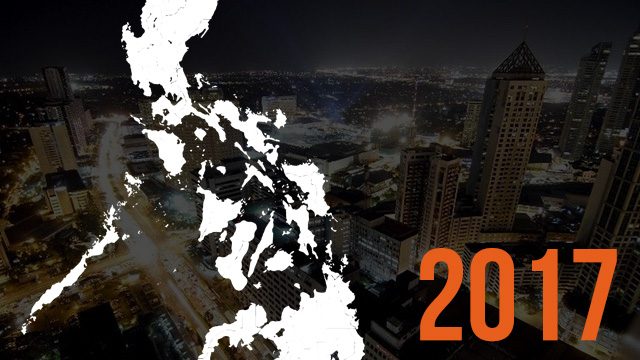 MANILA, Philippines – The Philippine economy is projected to grow as much as 8% in 2017 and beyond despite some global and local risks, thanks to the country’s sound economic fundamentals, said the investment banking arm of the Metrobank group.

The country’s gross domestic product (GDP) growing by 7% to 8% this year and beyond “will be doable with low inflation,” University of Asia and the Pacific (UA&P) economist Victor Abola said in a media briefing in Makati City on Thursday, January 5.

Inflation peaked at 2.6% in December, its fastest during the year, leading full-year inflation to settle below the government’s target of between 2% and 4%.

First Metro Investment Corporation (FMIC), meanwhile, expects the Philippine economy to be stronger in 2017 than in the previous year, growing by 7% to 7.5%. 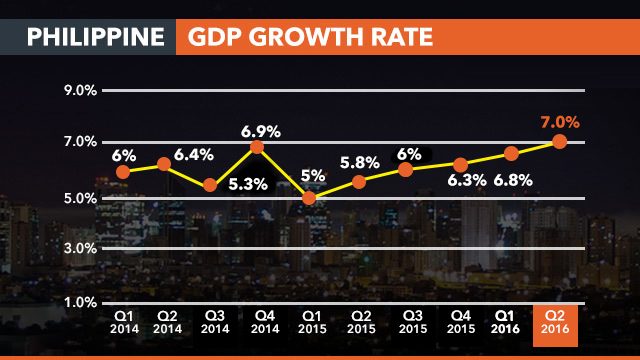 FMIC said inflation is seen to rise moderately at 2.8% to 3.2%, which would be attributed to the rebound of oil prices, strong domestic demand, and a weaker peso.

“The Philippine economy will continue to be robust and outperform its Association of Southeast Asian Nations (ASEAN) peers in 2017,” First Metro president Rabboni Francis Arjonillo said.

For UA&P professor Bernardo Villegas, the risks and threats the country may face include the “US economy facing a possible recession, the European Union growing very slowly, Japan in perpetual stagnation, China slowing down, emerging markets facing heavy debt burdens, and moderate depreciation of the Philippine peso.”

“Global economy – that is where the uncertainties come from. I do not include our President among the so-called uncertainties. It is really from the world that we still have a big question mark,” Villegas said. (READ: Citing Trump ‘uncertainty,’ Fed says faster rate hikes possible)

Despite these risks, FMIC said it is optimistic the country’s economy will grow faster than its peers.

The Metrobank investment banking arm said OFW remittances will sustain its growth as the US economy continues to improve.

“It is expected to grow by 2% to 4%. The recovery of oil prices is also seen to translate into higher demand for OFWs,” FMIC said.

Exports are projected to recover this year with a 5% to 8% growth, underpinned by the moderate growth of the global economy and the strengthening of the US economy, which accounts for 16% of the country’s total exports.

Imports, on the other hand, will sustain its double-digit growth of 10% to 14% driven by robust capital spending and higher oil imports.

FMIC said it anticipates infrastructure spending to grow between 5% and 5.5% of GDP this year.

It added that the Philippine peso will remain under pressure as the US economy continues to gain traction, leading to the strengthening of the US dollar.

FMIC said it expects the local currency to trade P51 against the greenback. (READ: How a Fed rate hike impacts the Philippine economy)

Last month, the Philippine peso hit P50:$1 intraday, and the Philippine Stock Exchange index (PSEi) bellweather hovered in the range of 7,800 and 6,500.

On Thursday, January 5, the PSEi closed at 7,209.44 points, higher by 2.54% or 178.49 points from Wednesday, after Wall Street gains and Philippine inflation saw its fastest growth last month. – Rappler.com