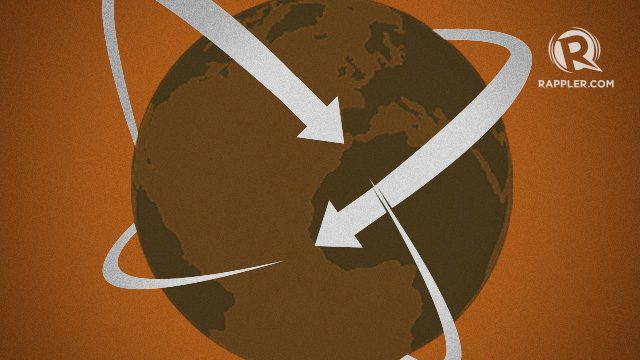 Facebook Twitter Copy URL
Copied
Globalization has been a boon for many, but western elites should have addressed its inequalities much earlier instead of sweeping them under the rug

PARIS, France – Governments stung by the political backlash from disgruntled voters left worse off by 3 decades of globalization are now scrambling for solutions, but there is no easy fix and the populist remedies on offer risk making things even worse, analysts say.

Globalization has been a boon for many, but western elites should have addressed its inequalities much earlier instead of sweeping them under the rug.

“Rich countries have too often forgotten those who lost out, the workers threatened by imports from low-cost countries,” Radu Vranceanu, a professor at the French Essec business school, told Agence France-Presse (AFP).

More than 20 years ago the man behind the annual Davos forum, Klaus Schwab, warned of a “mounting backlash” which could threaten economic activity and social stability. (READ: Chinese president to headline Davos meet – WEF)

“You have to listen to the people who have entrusted you with leadership,” the founder of the World Economic Forum wrote in the New York Times. “But in the end, it’s not enough just to listen. You have to solve the issues. You have to address… the root causes.”

Two decades on, the chickens have come home to roost: Britain’s shock vote to leave the European Union and Donald Trump’s US election victory are seen as a cry of protest by voters who feel they are getting poorer while the rich get richer.

The issues of growing income inequality and what to do about it are likely to dominate discussion when political and business elites gather in Davos next week.

“The share of wealth taken by the highest income brackets has risen in almost all countries over the past decade, both in developed and in developing countries” said French economist Thomas Piketty, a best-selling writer on modern capitalism and inequality who also runs a wealth database.

Even the International Monetary Fund (IMF), a champion of free trade, recently acknowledged that “international trade can deepen inequality in developing countries”.

But some observers say often-heard calls for “fairer globalization” have done little to change reality.

Still reeling from sudden changes in the political landscape, elites are seeking a response to the anti-establishment voter backlash, but no consensus has emerged.

Even before taking office, Trump threatened protectionist measures against Chinese and Mexican imports and claimed credit when automaker Ford and others dropped plans for new investment in Mexico.

European governments are also scratching their heads. Two junior ministers in the French government, Christophe Sirugue and Matthias Fekl, have come up with an idea for a “Buy European Act” and a “Made in Europe” label.

Such initiatives can be seen as forms of mild isolationism, but OFCE’s Timbeau suspects there may be a new form of economic selfishness at work.

“We are entering a stage in which there is no more goodwill in developed countries towards developing countries. On the contrary, everybody is defending their own interests against the others,” he said. “Everybody is looking out for number one.”

Apart from being perceived as unfriendly, such strategies may also be counter-productive, warned Vranceanu, at Essec.

“Trump’s protectionist threats could diminish the American economy’s capacity to develop. They run counter to his promise as a candidate to give the US a strong growth push,” he said.

There are more productive ways to level the playing field, such as taxes on products from countries which don’t respect climate agreements or which use “social dumping” to keep prices low, said Thomas Guenole, a political scientist and author of a book called “Unhappy Globalization.”

“If such taxes are high enough, they will restore the local economy to competitiveness” and put the brakes on offshore production, he told AFP, perhaps even encourage a return, so called “re-shoring.”

Whatever cure is attempted, 2015 Nobel prize winner Angus Deaton warned in a recent article, governments must ensure it’s not worse than the disease.

“We cannot ignore those who are hurting, but we need to ensure that our ‘fixes’ don’t make the problem worse,” he wrote.

The biggest problem facing economies are business leaders “getting rich on the backs of others while not contributing anything of value to the economy,” according to Deaton.

“The true bogeymen are the rent-seekers who have captured so much of our government. The inequality that they have wrought is the inequality that needs to be eliminated,” he said, citing as an example bankers who seek looser regulation and then lobby governments for taxpayer money if their banks fail.

“The resulting bailouts have given breathtaking sums of public money to people who were already fabulously rich,” he said. – Rappler.com