MANILA, Philippines – The Department of Transportation (DOTr) announced plans to open a shorter shipping route between the Philippines and Indonesia, a move meant to strengthen trade relations between the two neighboring countries.

The maiden voyage scheduled on April 28 will originate from Davao City, the hometown of President Rodrigo Duterte. He and Indonesian President Joko Widodo were invited to the formal opening of the shipping route, said the DOTr in a statement on Sunday, January 15.

The current shipping route from Davao City in Mindanao takes up to 5 weeks because ships first have to sail northwards to Manila and then cross the West Philippine Sea (South China Sea), passing through Malaysian waters, before it reaches various ports in Indonesia. Its final stop is in Bitung City in the northern coast of Sulawesi Island, based on a map provided by the DOTr. 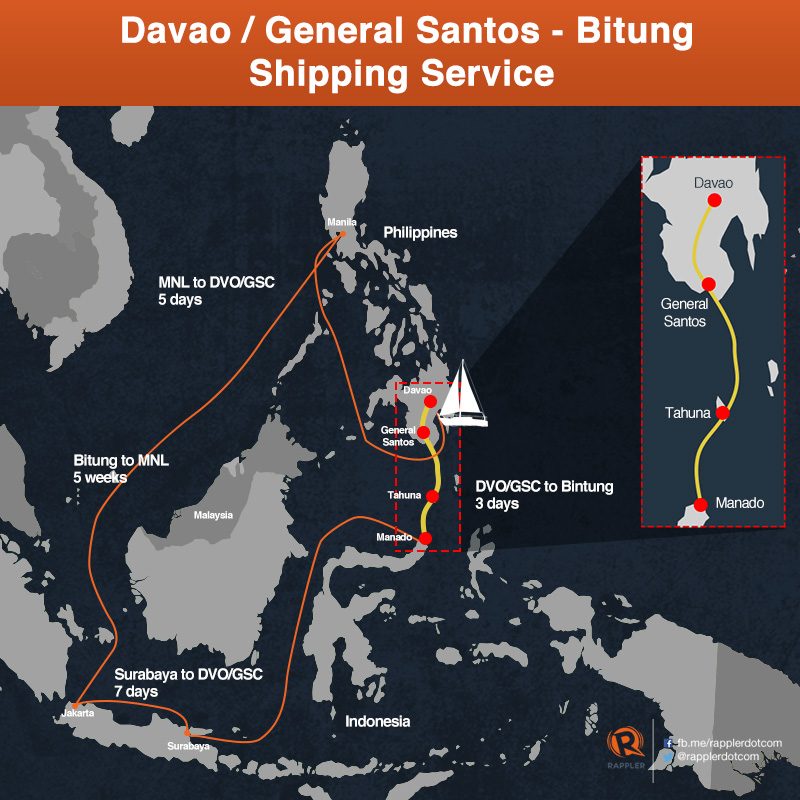 “Having a shipping route such as this is crucial for any maritime region. Sea linkage will strengthen our economies and our partnerships in other areas of development. And it will also improve the quality of life of our people because local businessmen and traders will directly benefit from this,” DOTr Secretary Arthur Tugade was quoted as saying.

“Apart from being more time-efficient, the new route is also cheaper with savings estimated to about P75,000 ($1,500) per TEU (twenty-foot equivalent units), creating revenue for local businessmen and the government,” according to the DOTr statement.

The Asian Marine Transport Corporation (AMTC) will initially provide a weekly shipping schedule. Its vessel has a capacity of 100 TEU.

The DOTr said other vessel operators are expected to show interest in plying the route.

The Philippine government created an inter-agency task force to ensure the success of the project. Officials from the DOTr, Department of Trade and Industry, and Department of Agriculture are going to Bitung next week to check the readiness of the ports. – Rappler.com