MANILA, Philippines (UPDATED) – In another election year, the Philippines ended 2016 with a strong 6.8% economic growth. It remains one of Asia’s fastest-growing economies, ahead of China’s 6.7% and fellow high-riser Vietnam’s 6.2%. India has not released its full-year data yet.

Weather disruptions remained a roadblock, however, as the dismal performance of the agriculture sector pulled down the 4th quarter growth by 0.1 percentage point. Typhoon Karen (Sarika) and Super Typhoon Lawin (Haima) slowed down the pace of growth to 6.6% in October to December from the previous quarter’s 7%.

“We are deeply concerned about the contraction of the crops sector in the 4th quarter following a contraction the previous year.  More disturbing is the performance of the fishery subsector that remained in negative territory for almost 7 years now, except only in 2013,” Socioeconomic Planning Secretary Ernesto Pernia said in a press conference.

Despite the typhoons in the last months of 2016, the Philippines remained among the region’s top performers but slid to the 3rd spot as Vietnam’s 6.7% overtook the Philippines for the first time in 2016. 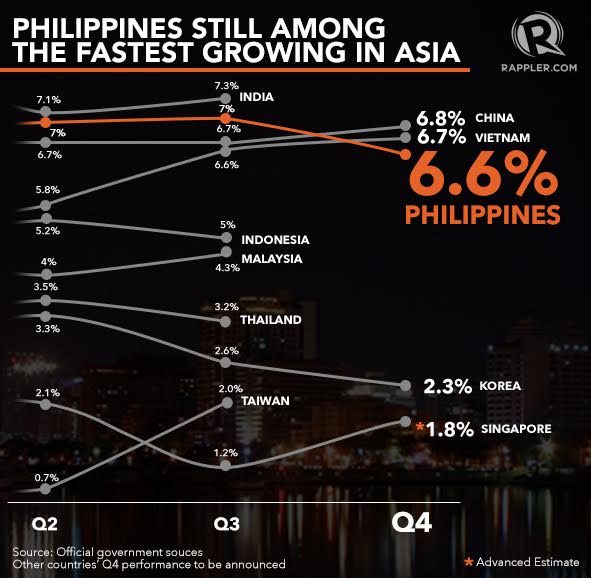 “The government thrust on infrastructure spending should provide a solid base for the economy to meet the 2017 growth target. The inflation outlook also remains manageable. Thus, there is no real pressing need to deviate from [the] current stance of monetary policy,” he added.

Tetangco said the BSP continues to monitor external developments that may affect its growth dynamics and financial markets. “We will adjust policy levers as and when necessary.”

Expectations in the coming years

For Bank of the Philippine Islands (BPI) Global Markets research, the Philippines can expect growth to carry on its “robust trend of above 6%,” with household consumption and consumption-related investment seen to carry the load.

“Government spending, long the missing link to the Philippine growth story, continued to lend its hand to expansion, helping boost the overall print,” the Bank said in an letter to the media.

But the bank noted that the steady pace of government spending was not met by a commensurate increase in revenue collection, which may be tolerated in the near term but may be credit negative in the medium term.

“The trade deficit continues to widen to historical levels as imports sustain their binge while exports continued to languish in 2016. Meanwhile, remittances, which account for roughly 9% of the economy, is expected to post a flat growth for the full year,” it added. – Rappler.com