Under Duterte, is PH economy in good hands?

Jan 26, 2017 4:20 PM PHT
Rappler.com
Facebook Twitter Copy URL
Copied
'Growth momentum is there until 2017, but beyond that, the management of the new leader (Duterte) will have a key role,' says the senior economist at ING bank 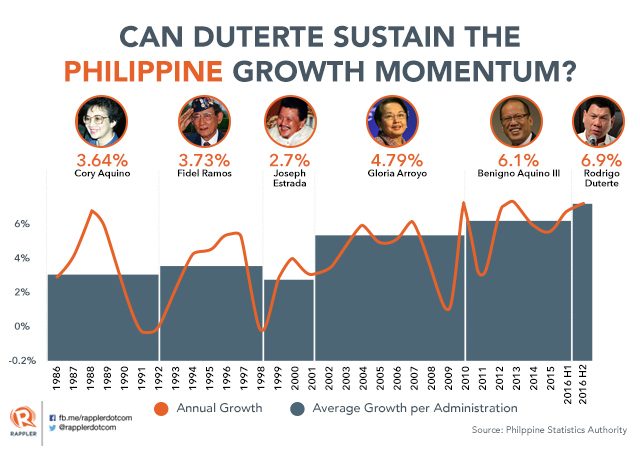 MANILA, Philippines – President Rodrigo Duterte inherited an economy that’s on a roll. After decades of erratic growth as the tiger economies in the region roared, it seems the Philippines has hit its stride and is growling on its own.

From 2010 to 2016, the economy, as measured by the GDP, grew by an average of 6.3%. It hit growth rates higher than 7% at least twice the last 6 years, and performed better than most countries in Asia, even overtaking China’s for the first 9 months in 2016 – despite being hit by some of the most powerful typhoons ever recorded.

In the past administration, under President Benigno Aquino III, the economy stabilized and, since 2010, grew faster than ’90’s-era peer countries, Thailand and Malaysia. Although these neighbors remain more prosperous, their economies struggled under leadership transition issues and political scandals.

Aquino turned over to Duterte an economy that had benefited from reforms in governance and transparency, as well as fiscal and budgetary reforms, which started under Aquino’s predecessor, President Gloria Macapagal Arroyo.

In 2016, the year Duterte took over after winning the elections in May, the economy grew 6.8%. It’s a stellar performance not yet be fully attributed to Duterte.

“Growth momentum is there until 2017,” noted ING Bank senior economist Joey Cuyegkeng at an economic forum in May, referring to the driving force gained during the Aquino years. “But beyond that, the management of the new leader (Duterte) will have a key role.”

“This would mean that, over the next 6 years, the economy will expand by about 50% in real terms, and per capita income will rise by over 40%. This should bring us to the upper-middle income category standing by 2022,” Socioeconomic Planning Secretary Ernesto Pernia said on Thursday, January 26.

The economic team is banking on various legs of growth, with infrastructure spending among the priorities. Duterte’s term will be “The Golden Age of Infrastructure,” a term first mentioned by Budget Secretary Benjamin Diokno. An infrastructure binge, as anyone who has spent hours trying to ply Manila’s roads knows, is badly needed.

With some projects also directed to regions outside the capital, the new government has pledged to push spending on infrastructure to 7% of GDP.

It’s a promise that excites those who are monitoring the country’s prospects. “Infrastructure spending [is expected] to come on board even more in 2017,” Chidu Narayanan, economist for Standard Chartered Asia, cited in media briefing earlier this week.

To fund the increased expenditure, Finance Secretary Carlos Dominguez has led efforts to set in motion a broad tax reform package, which in turn is a key component of Duterte’s 10-point socioeconomic agenda.

The agenda has been praised by most observers, although credit watchers  Moody’s and Standard and Poor’s, though broadly positive on the economy’s prospects, have also warned about increased political risk.

“Progress on the agenda could ultimately depend on how the President deploys his considerable political capital; a sustained focus on political matters could detract attention away from economic and fiscal reform,” Moody’s said in a report last year that maintained the country’s investment grade rating.

Uncertainties have hounded Duterte’s early months in office as the firebrand president, the first from Mindanao, spewed out expletives against world leaders and announced a pivot to China.

Pernia acknowledged that there are factors outside their control. Among others, the “America First” policy of United States President Donald Trump is bringing uncertainty to the business process outsourcing (BPO) and other export sectors in the Philippines. The US is among the country’s top trading partners and home to top BPO clients. Revenues from the latter is a major complement to remittance flows, which account for about 10% of the Philippines’ GDP.

These possible policy shifts in the US is among the “potential downside risks” that the Duterte government needs to be vigilant about for “potential repercussions to the Philippine economy,” Pernia noted. – with research by Sofia Tomacruz/Rappler.com