Gina Lopez: MICC ‘cannot tell me what to do’ 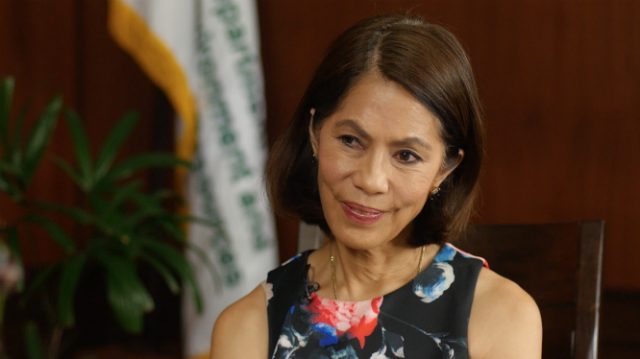 MANILA, Philippines (UPDATED) – Despite an ongoing review by a mining council, Environment Secretary Gina Lopez stood firm on her decision to sanction more than half of the country’s 41 metal mines, saying she will only take instructions from the Philippine president.

“MICC (Mining Industry Coordinating Council) is recommendatory. They are not over me. They cannot tell me what to do. The only one who can tell me what to do is the President,” Lopez said in a televised interview.

The MICC issued a resolution on late Thursday, February 9, stating that it will create a “muti-sectoral review and advise the DENR (Department of Environment and Natural Resources) on the performance of existing mining operations in consultation with local government units (LGUs).”

Formed under the leadership of former President Benigno Aquino III, the MICC was tasked to oversee reforms to help miners become more environmentally and socially responsible while providing a bigger pie in industry profits.

This council is now co-chaired by Lopez and Finance Secretary Carlos Dominguez III, who earlier said that the closure of 23 mines will lead to joblessness.

“It (MICC review) is just to appease them (miners). But at the end of the day, even that review process is recommendatory to me. I make the decision and my decision is no mining in watershed. Water is life,” Lopez said in an ANC interview on Friday morning, February 10.

Mining companies thanked President Rodrigo Duterte for promising to observe “due process” in the closure of 23 mines and suspension of 5 others.

The Chamber of Mines of the Philippines (COMP) – an organization of local miners – has argued that the regulator’s audit was “one-sided” and “compromised.”

The group also said that the livelihood of 1.2 million people stands to be affected by the closures.

COMP added the country stands to lose P22 billion In investments due to an uncertain climate and that 20% of the gross domestic product (GDP) of MIMOROPA and Caraga regions are directly from mining operations.

“I don’t know where that number of 1.2 [million] is coming from because they don’t even have jobs every day of the year. The latest number of NGP (National Government Portal) is 219,000 in the third quarter of last year,” Lopez argued.

The MICC said in the resolution that those adversely affected by suspension or closure – including displaced workers directly or indirectly employed by mining contractors – will be assisted through the government’s livelihood and employment transition plan.

“They (firms violating mining rules) should be receiving today (February 10) the official notices of closure or suspension. They can appeal to the President and unfortunately, while the appeal is ongoing, they can still actually mine,” Lopez said.

After observance of due process, the MICC said that those found guilty of violating mining contracts, laws, and regulations, will be meted the appropriate penalty under the laws. (WATCH: Rappler Talk: Gina Lopez on mining company crackdown)

In a news forum organized by the Philippine Chamber of Commerce and Industry on Friday, February 10, mining executives and other business leaders took turns criticizing the process that led to the decision to shut down and suspend the operations of some mining companies.

Hans Sicat, president and CEO of the Philippine Stock Exchange, said the DENR decision was “very worrisome” and “irresponsible,” based on the complaint that the concerned mining firms did not receive any formal notification regarding the decision.

“Our main job is to try and operate a financial market that is efficient, but more importantly, that is fair. So what we saw last Thursday, when we believed that there was this surprise announcement in media of a suspension and closure of mines including companies that are publicly listed, we thought that this was actually a very worrisome trend, if not  a very irresponsible move from the DENR,” Sicat said.

Bravo explained that the aerial photo of the PGMC mine site the DENR had used to accuse company of violating environmental laws such as causing siltation was taken in January, after two weeks of continuous heavy rains in Mindanao. The photo showed a murky brown coast.

He explained that the “naturally occuring siltation” was caused by the heavy rainfall, and not by mining operations. A photo of the same area a few days later, he said, would show clear waters.

“I think Secretary Lopez was overwhelmed by her emotion without putting science in looking into the matter. I think it should be the MGB and the experts and the engineers who should be looking at it  rather than a superficial and emotional way of evaluating whether a mining company has violated environmental laws,” Bravo said.  – Rappler.com