DICT chief: No need to auction off unused frequencies 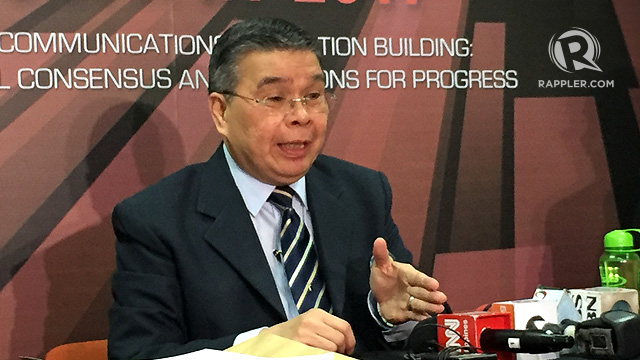 MANILA, Philippines – There is no need for a public auction for surrendered and recalled spectrum frequencies which are seen to entice a 3rd major telecommunications player, said the chief of the Department of Information and Communications Technology (DICT).

Unless told otherwise by President Rodrigo Duterte, DICT Secretary Rodolfo Salalima said there would be no public bidding for the recalled radio frequencies.

“If I am to be followed, no auction. We don’t exist for revenue. We are here to do public service,” he said at the Philippine Telecoms Summit 2017 in Pasay City on Thursday, March 9.

Instead, interested players can apply to the National Telecommunications Commission (NTC) for an ample amount of frequency to operate as a telco provider, Salalima said. (READ: Avocado, 4 new players enter PH telco industry)

“My understanding of the law is there is no auction unless demand for frequency is more than the supply,” Salalima said in a briefing on the sidelines of the summit.

Last year, the NTC had announced it was in talks with the DICT on the planned auction.

“If there is a new operator, give them just enough. Globe [Telecom Incorporated] started only with 10 MHz. PLDT only started with 15 [MHz],” Salalima said.

Initially, the NTC planned to auction off the bundled frequencies that were returned by PLDT and Globe when they bought San Miguel Corporation’s telco assets in May 2016.

NTC Commissioner Gamaliel Cordoba had said this could also bundled with the 10 MHz 3G frequencies of Connectivity Unlimited Resource Enterprises (CURE) from PLDT.

But with the DICT chief’s planned route, these interested foreign firms should first find local partners then file for an application for authorization with the NTC.

“File an application with the NTC. When you apply, be sure you are legally qualified, financially qualified, and have the technical competency to do it,” Salalima said.

Under the 1987 Philippine Constitution, only companies owned at least 60% by Philippine nationals or corporations may operate as a public utility. (READ: Chinese suppliers set sights on the national broadband plan)

The local telco industry is currently dominated by PLDT and Globe, which have both been under fire for costly and slow internet services.

Five small players entered the local telco industry after their franchises were approved by Congress and lapsed into law. But none of them have applied to the NTC for allocation of spectrum frequency, so far.

The amount of spectrum assigned to a telco impacts the cost of the build capacity, overall network performance, ability to offer new multimedia services, and general customer experience of wireless services. – Rappler.com