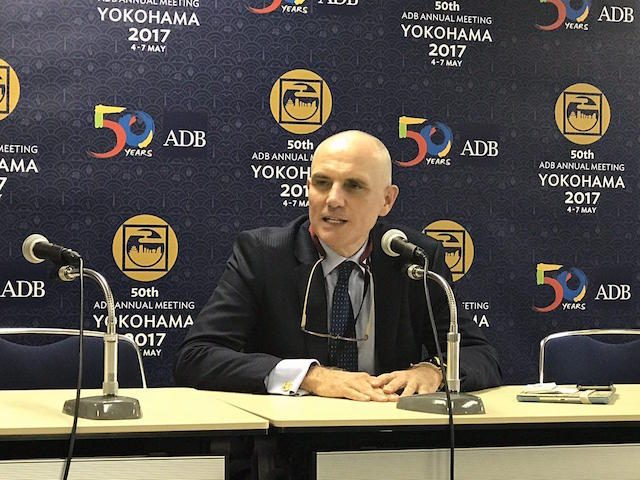 Facebook Twitter Copy URL
Copied
The Asian Development Bank also launches Public-Private Partnership initiatives in an effort to strengthen its bankability and implementation, and approves $2.5B in financing support to private sector operations

At the the Bank’s 50th annual meeting here, mobilizing private resources for development was, along with infrastructure development, one of ADB’s 5 priorities.

“This includes promoting greater and more effective use of public–private partnerships, or PPPs. This approach is not new. In the late 19th century in Japan, for example, many railways and electricity services were started through innovative private companies under concessions granted by the government,” ADB President Takehiko Nakao said in his the opening address on Saturday, May 6.

Yet while the Bank encourages this, in the Philippines, the administration of Philippine President Rodrigo Duterte has suggested a shift towards Official Development Assistance (ODA) for infrastructure projects, and less PPPs.

Finance Secretary Carlos Dominguez III had said that the Duterte administration will avoid the PPP route on certain infrastructure projects to fast-track completion and save on costs.

Even the new PPP Center executive director, Ferdinand Pecson, said the Philippines could see fewer PPP projects than before, as the government seeks new methods best suited for each public infrastructure deal.

“We are looking at this in its totality, from financing to operations and maintenance. If it turns out that the government is better off constructing the infrastructure using financing from soft loans with lower interest rates, we would pursue this,” Pecson added.

The Philippines’ view is different from others in the region. ADB Private Sector Operation Director General Michael Barrow said he is seeing more and more countries open up to PPPs.

“Every government, wherever I go, is talking about PPPs. It’s accepted, the modality is accepted. I hope in the Philippines it continues, but certainly the Philippines is one of the pioneers of this discussion,” Barrow said on Saturday.

“I think the turning point, in terms of the willingness to engage and wanting to engage with the private sector, is a big part of the solution going forward in Asia.”

He said it is important to continue pursuing PPPs in the Philippines, which is behind in infrastructure due to years of underinvestment, lagging behind neighbors like Thailand, Malaysia and Singapore.

“The Philippines needs the infrastructure, there’s no doubt about it,” Barrow said.

But he also said “there’s still a lot to be done in the PPP side.”

“From a big picture perspective, we’d like to see the PPPs go forward. We think there are some projects with real strong potential to be PPPs in the Philippines, we’d like to support those transactions, and we have,” he said. “We are active in the market, not as much as we’d like to be, we’d like to do much more.”

He also said “the needs are so enormous” that infrastructure financing must be a combination of sources.

ADB Principal PPP Specialist Amr J. Qari agreed, saying “it is understandable if the government seeks to tap into various funding sources such as ODA and PPP.”

“However, government has to exercise sound budgetary management as repayments of ODA will be a long-term fiscal burden.  That being said, it is advisable to use PPP modality for commercially viable projects to mobilize private capital flows and leverage private sector’s technical expertise,” he said.

He also said “the government should select their projects for ODA or PPP with a clear and transparent policy of infrastructure development.”

The Duterte administration has expressed frustration over the prolonged implementation and delays of PPP projects, and has questioned whether they are appropriate for certain infrastructure projects.

Since the PPP program started in the 3rd quarter of 2010 under the Aquino administration, 56 projects have been launched. Of these, 4 were completed as of end-2016.

During Duterte’s visit to Beijing, he and Chinese President Xi Jinping signed 13 cooperation deals, including a memorandum of understanding on transportation and infrastructure projects.

In February, BMI Research, the research unit of Fitch Ratings, noted that with the Philippines’ friendlier ties with China, the Duterte administration is more likely to shift to a “government-centered investment approach.”

But Barrow said delays happen across the region. He also said that in the Philippines, the infrastructure gap is not because of lack of money, but the lack of bankable, well-structured projects.

He said the ADB’s PPP department hopes to help solve that.

“That’s one of the big missing pieces that will really change the dynamic, if we’re going to fill that infra gap moving forward. But it’s a job for all of us. public sector, private sector and governments.”

Meanwhile, the ADB aims to strengthen the bankability and implementation of PPPs and has rolled out a couple of initiatives to achieve that.

The Infrastructure Referee Program (IRP), announced here, provides independent third party advice through qualified consultants to help public and private parties resolve disagreements that may arise over the life of a PPP project.

“ADB, through the IRP, will help resolve disagreements between public and private stakeholders and support successful delivery and implementation of PPP projects in Asia and the Pacific,” Kaga said.

ADB also launched a new publication, the PPP Monitor, to track the PPP business environment across the region and provide insight for governments to build an environment that attracts PPPs.

“The PPP Monitor will provide country-specific information critical not only for sound policy formulation but also for the private sector to make informed business decisions,” Kaga said.

Additionally, over the last year, ADB approved $2.5 billion in new financing to support private sector operations in the region, while mobilizing $5.8 billion in direct value-added cofinancing. The combined $8.3 billion for 2016 was 15% higher than in 2015, a new record.

“The private sector has a critical role in helping Asia and the Pacific achieve a more sustainable and inclusive future,” said Diwakar Gupta, ADB Vice-President for Private Sector and Cofinancing Operations.

“Our 2016 private sector operations are a testament to ADB’s commitment to scale up cooperation between the region’s public and private sectors, and to ensure that our investments provide positive results on the ground,” he added. – with reports from Chrissie Dela Paz/Rappler.com