FAST FACTS: How important is the EU to the Philippines? Facebook Twitter Copy URL
Copied
The European Union is a major donor, the 2nd top export destination, and the 4th top source of OFW remittances, among others

MANILA, Philippines – The Philippine government explained its decision to refuse new grants from the European Union (EU) by saying that the country must be “independent.”

Before making the controversial decision, Philippine President Rodrigo Duterte had already dared the EU to withdraw its aid, saying that the country would survive.

The EU previously warned that the Philippines could lose its trade incentives if it did not improve the human rights situation in the country.

Just how important is the EU to the Philippines? Rappler takes a look:

1. The EU is a major donor and source of Official Development Assistance. 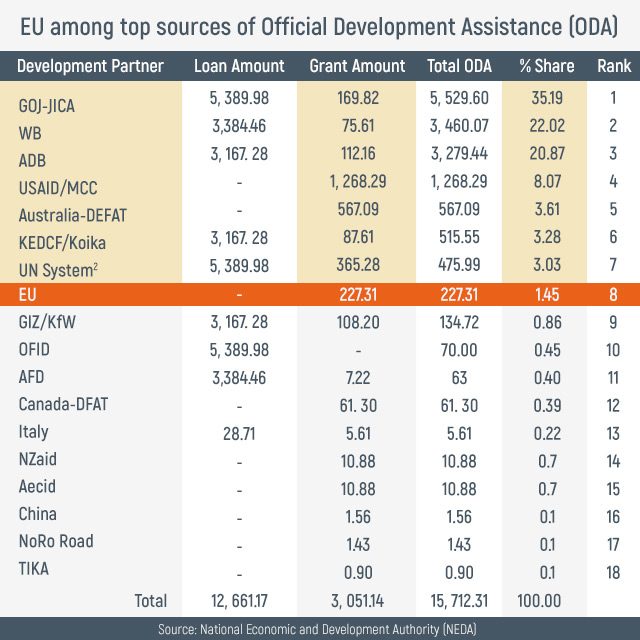 The EU was the 8th largest contributor of Official Development Assistance (ODA) to the Philippines in 2015, according to latest data from the National Economic and Development Authority (NEDA). The EU provided $227.31 million in grants, interest-free, and accounted for about 2% of the total ODA funding in 2015.

According to the EU office in Manila, aid to the Philippines was raised to €325 million for 2015 to 2019, from €130 million for 2007 to 2014. Bulk of the current aid has gone to Muslim communities in Mindanao where the EU has been active in funding peace- and development-related initiatives.

In a statement last April, EU Ambassador to the Philippines Franz Jessen said the EU is providing 80% of the multi-donor Mindanao Trust Fund for the socioeconomic recovery of conflict-hit communities in Mindanao.

“Over the past 11 years, the program has delivered more than 500 community sub-projects for over 650,000 people in 316 conflict-affected communities all over Mindanao, in an effort to demonstrate the benefits of reaping the dividends of peace,” Jessen said.

2. The EU is the Philippines’ 2nd top export destination. The EU has been a major export destination of Philippine products.

Exports to the EU grew 48% in the 1st quarter of 2017, making the EU the biggest and fastest-growing export destination of Philippine goods. The EU overtook the longtime top export markets, the United States and Japan, in March.

These were generally the result of the Philippines enjoying the benefits of its EU GSP+ status (Special Incentive Arrangement for Sustainable Development and Good Governance). The GSP+ scheme is a preferential tariff scheme that allows the Philippines to export more than 6,000 products, including fruits, coconut oil, footwear, fish, and textile, to any EU member-country tariff-free.

The Philippines is the only ASEAN country and among 13 beneficiaries with a GSP+ status.

According to the European Commission, the Philippines’ main exports to the EU include office and telecommunications equipment, machinery, and food products, as well as optical and photographic instruments.

The conditions for GSP+ include adherence to core international conventions on environmental protection, good governance, and human rights.

3. Europeans are the 3rd largest group of tourists in the Philippines. 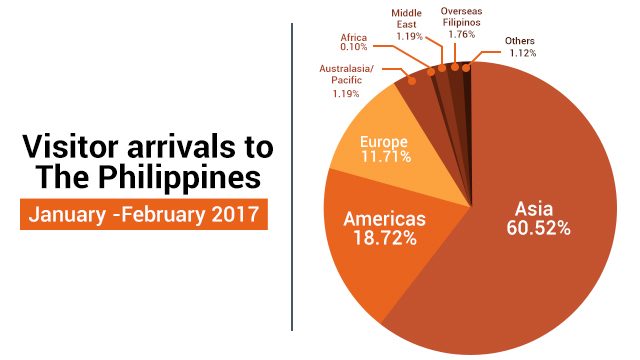 Europeans are also the 3rd largest group of foreigners visiting the Philippines, next to the Americas and Asia.

Figures from the Department of Tourism show that of the total 1,210,817 foreign tourists who visited the Philippines in the first two months of 2017, over 11% came from the EU.

Germany registered the highest per capita expenditure for February. On average, a visitor from Germany spent P60,260.45 while in the Philippines.

The number of tourist arrivals from Europe has been improving since 2014, after the EU agreed to remove Philippine carriers from its blacklist. This move followed a 2010 decision of the EU after it found that the Civil Aviation Authority of the Philippines (CAAP) failed to implement global safety standards. The EU ban had required travel agents to warn passengers against booking trips with Philippine carriers.

4. Europe is the 4th top source of OFW remittances. Europe is the 4th largest source of remittances, which contributes about 10% to the Philippines’ GDP.

Remittances remain a main driver of private consumption and give Filipinos more puchasing power to afford products and services.

According to the Bangko Sentral ng Pilipinas (BSP), remittances from Europe reached about $3.8 billion, the 4th top source next to Asia, the Middle East, and US, in 2016. Those inflows from Europe accounted for about 14% of the total $26.9 billion in remittances that overseas Filipinos sent home to their loved ones in 2016.

The United Kingdom, which is expected to divorce from the EU, was the source of $1.4 billion – a bulk of the remittances from the region in 2016.

European Union members, however, have been host to Filipinos who sent home substantial amounts as well: Germany, $706 million; Italy, $239 million; and Switzerland, $158 million.

5. The EU is a key source of foreign direct investments. Europe is also a top source of job-generating foreign direct investments (FDIs), next to Japan and ASEAN.

Figures from the BSP show that in 2015, the Philippines received $308 million worth of FDIs, coming in 2nd next only to Japan. In 2016, however, more funds flowed out of the Philippines, resulting in a net loss of about $125 million in FDIs.