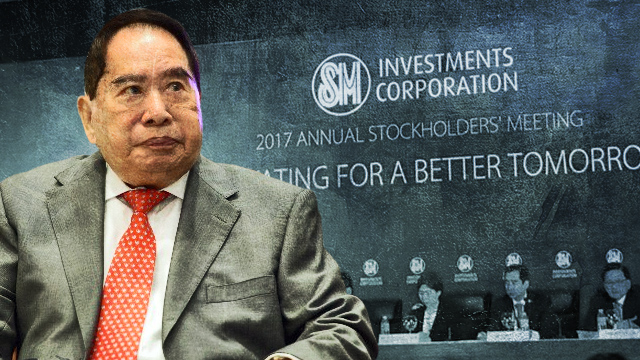 MANILA, Philippines – It took the Sy family almost 60 years to get to where they are now. Starting off with 10 centavos in his pocket, Henry Sy Sr is now the Philippines’ richest man with an estimated $12.7-billion personal fortune as of end-2016.

But it was not an easy feat for the Chinese migrant. The Sy family’s businesses underwent difficult economic and political upheavals over the years, from World War II up to the global financial crisis in 2008.

SM group founder Henry Sy Sr was only 11 years old with 10 centavos in his pocket and no knowledge of English when he followed his father to the Philippines. Sy thought his father, a migrant from China, was well-off. But it turned out his father just owned a sari-sari store along Echague St in Manila’s bustling Quiapo district. 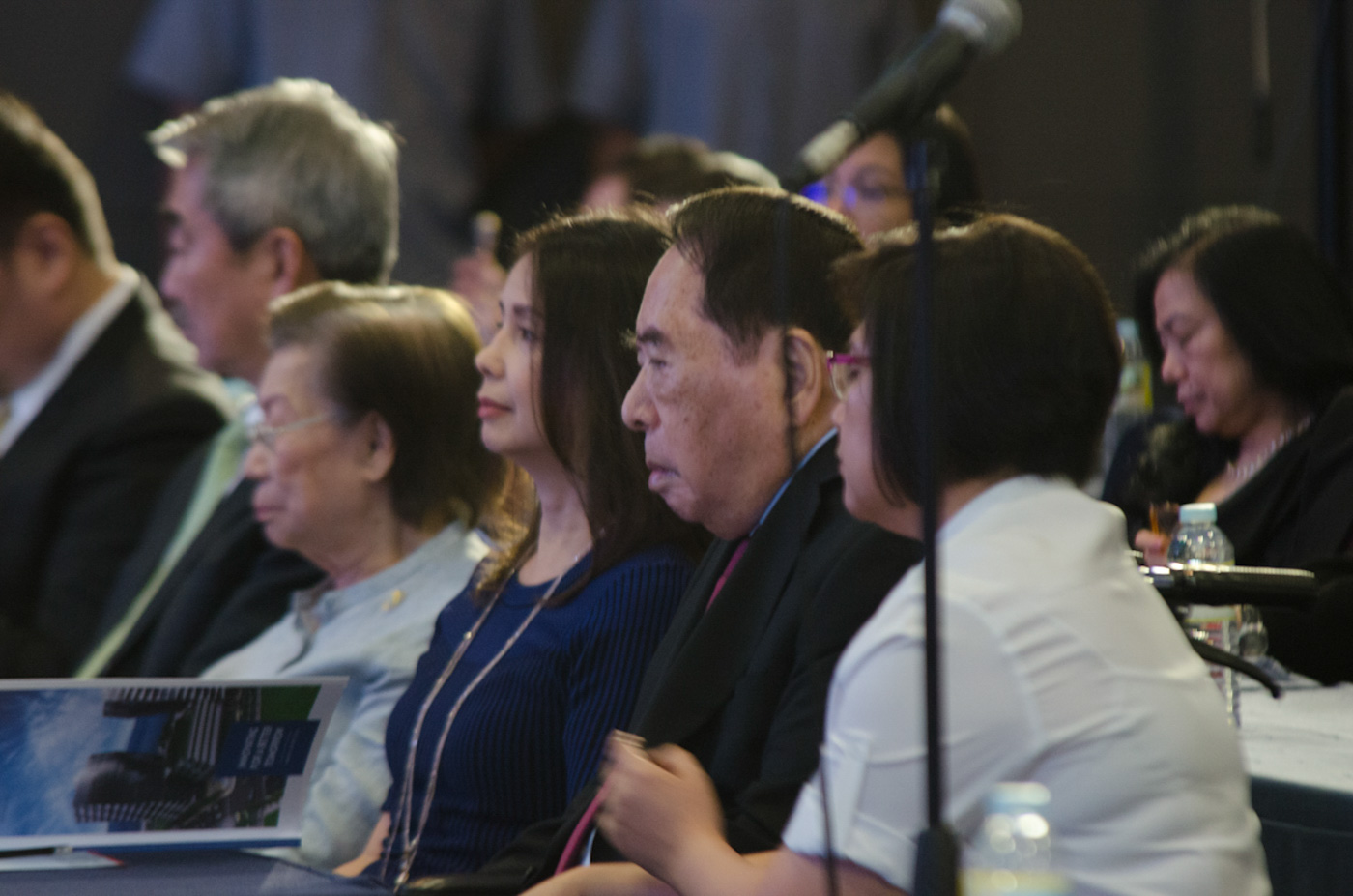 During World War II, the Sy family’s sari-sari stores were burned. His father went back to China, while Sy started looking for other business ventures.

It was in 1958 when Sy first ventured into the shoe business, selling surplus GI boots and eventually opening his first shoe store in Carriedo.

With no more local shoes to sell, Sy started to look overseas for broken sizes, mainly for Filipino women. This made Shoe Mart the most efficient shoe business at the time.

In 1967, Sy bought Acme Savings Bank, which he then renamed to Banco de Oro. He ventured into banking to provide cash management to suppliers. He was competing versus Good Earth, COD, Remson, and Isetann back then. With a bank in his portfolio, he was able to outgrow all of them and became the last man standing.

Married to a vendor of lace, Sy thought of branching out and selling other products like children’s wear. It was in 1972 when he transformed Shoe Mart to SM Department Store.

In 1983, Sy opened his first shopping mall after he saw the emergence of the mall business in the United States. SM City North EDSA, then a 125,000-square-meter mall, opened at a time when the country was plunged into one of the most turbulent periods in political history. Interest rates were at 50%. Today, SM City North EDSA is now over 400,000 square meters (sqm).

From malls and banking, the SM group has since branched out to property, gaming, and mining.

As of 2016, the 92-year-old Sy has $12.7 billion in assets, making him the richest person in Southeast Asia, according to US magazine Forbes. His conglomerate, SM Investments Corporation, ended 2016 with P31.2 billion in net income.

From retail to education

Most, if not all, Filipino consumers are familiar with malls and condominiums developed by the SM group. Its 63rd mall, SM Cherry Antipolo, is the latest addition to its malls all over the Philippines. As of end-2016, it also has 7 malls in China, 43 residential projects, 6 office buildings, and 6 hotels.

In addition to that, SM Investments owns 44.3% of the largest domestic bank in terms of assets – BDO Unibank Incorporated. It also owns 19.9% of China Banking Corporation.

This year, SM Investments acquired a 34.5% stake in Negros Navigation Company Incorporated, the parent company of 2GO Group Incorporated. This marked the conglomerate’s entry into the logistics sector. 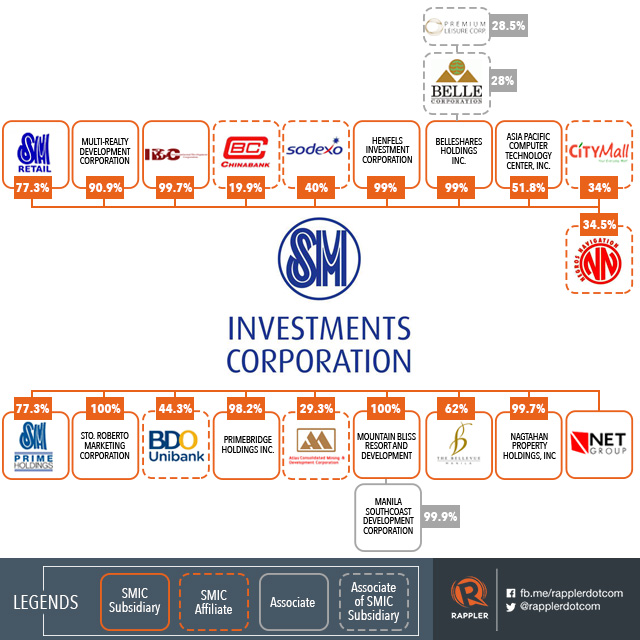 The Sys also have a 34% stake in CityMall, a subsidiary of DoubleDragon Properties, which runs a chain of community shopping malls across the Philippines.

In education, SM Investments owns a 51.8% stake in the company behind Asia Pacific College.

Who’s who in the Sy family

The SM empire has been run by the Sy family for the past 59 years. The family started out with surplus GI boots, then diversified into almost everything from mining to logistics. Their conglomerate and two of their core businesses have been listed on the Philippine Stock Exchange and placed in the hands of professional chief executive officers, but the family remains at the heart of these firms. (READ: SM Investments shakes up management, prepares 3rd generation) 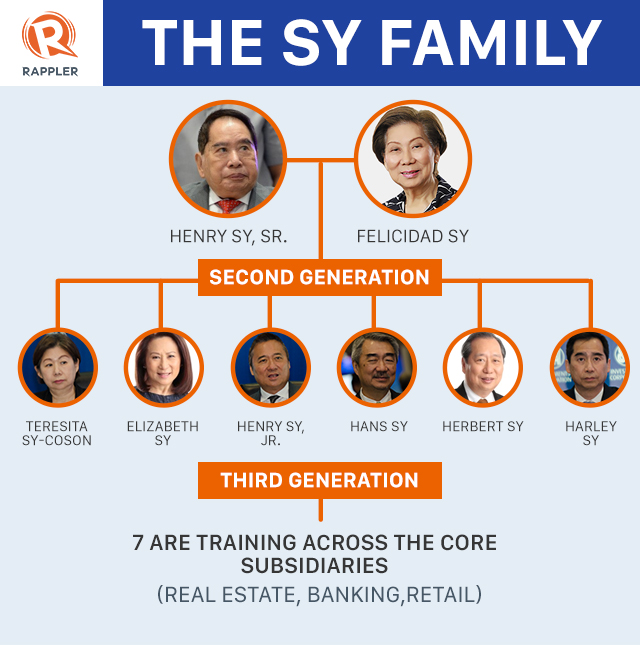 Data from SM Investments’ 2016 annual report showed Teresita, Elizabeth, Henry Jr, Hans, Herbert, and Harley have direct stakes totaling about 44% in SM Investments. The remainder of the family’s share in the SM group is being held directly by the 92-year-old Sy and his wife through his family-owned companies.

Since the start of 2017, the 92-year-old Sy has been serving as the chairman emeritus of SM Prime Holdings and BDO Unibank as well as the honorary chairman of China Bank.

Elizabeth, 64, has been in charge of the family’s hotels and convention centers and currently serves as an adviser to the board of SM Investments.

Although Hans, 61, retired as SM Prime president in July 2016, he still serves as chairman of the company’s Executive Committee and member of the board.

The youngest son, Harley, serves as a director of SM Investments. He is also a director of China Bank and other companies within the SM group as well as adviser to the board of BDO Private Bank. Harley also serves as the vice chairman of SM Retail.

Jose Sio, the chairman of SM Investments, said the group is also preparing the 3rd generation of the Sy family to take leadership positions in the near future.

Harley had said there are 7 of the 3rd generation of the Sys “spread throughout the core businesses.”

A glance at the SM group’s finances

In 2016, SM Investments‘ net income grew to P31.2 billion, fueled by strong revenues in its property and banking units. Its property unit accounted for 39% of total earnings, while banks comprised 37% and retail 24%.

The residential group – which consists of SM Development Corporation, Highlands Prime, and Costa del Hamilo, among others – had a 13% growth in consolidated revenues, reaching P25.4 billion in 2016. 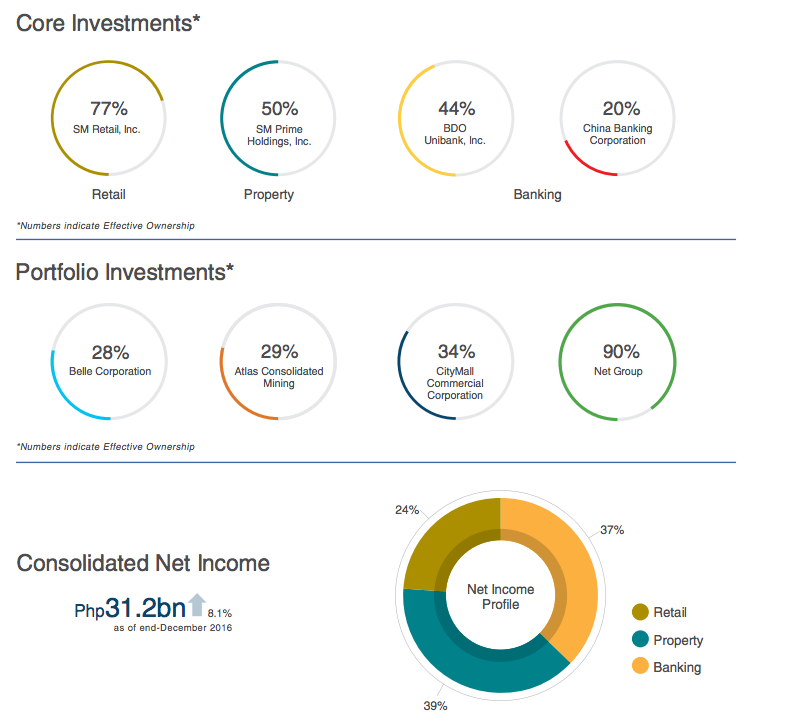 SM Prime’s hotels and convention centers marked a 32% growth in revenues to P3.2 billion in 2016, largely due to improved occupancy rates and the opening of Park Inn Clark in December 2015 and Conrad Manila in June 2016.

For banking, BDO Unibank posted a net income of P26.1 billion in 2016. China Bank, meanwhile, reported net income growth of 15% to P6.4 billion in 2016 on the back of sustained growth in core and fee-based businesses.

The main driver of the group’s revenue, SM Prime, is now on its 4th year of a 5-year roadmap to double its net income in 2013, which ended at P16.3 billion. Last year, SM Prime’s net income grew to P23.8 billion. It needs an increase of P8.8 billion in net income by 2018 to achieve its 5-year target.