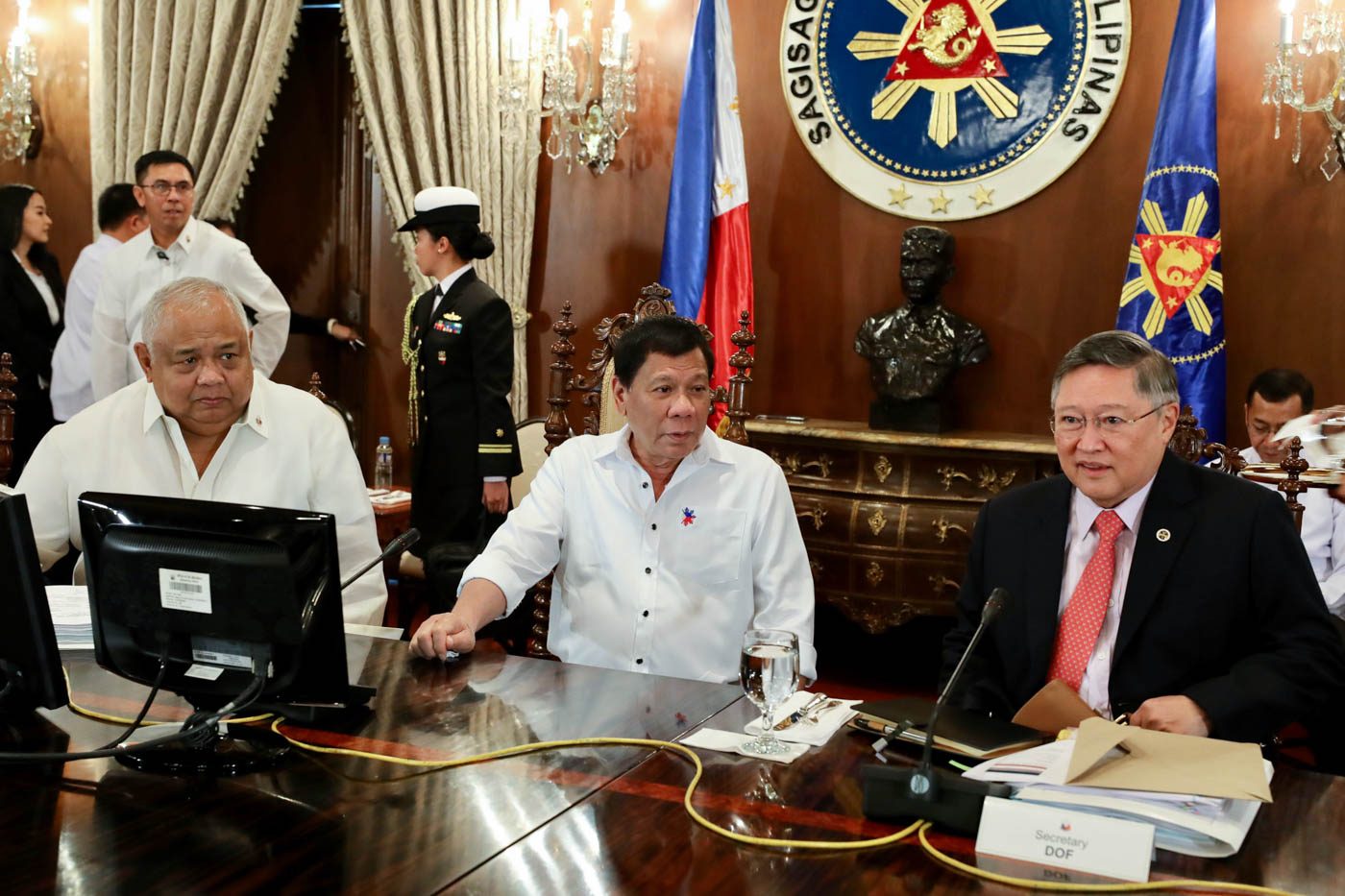 MANILA, Philippines – Major railways as well as water, airport, and education projects – 11 in total – secured final approval from President Rodrigo Duterte, with most of these deals’ financing being shifted to official development assistance (ODA).

The National Economic and Development Authority (NEDA) Board, chaired by Duterte, on Tuesday, June 27, also approved a national transport policy (NTP) that aims to unify all transport-related projects in the Philippines.

“In particular, the policy will synchronize decisions and investments of all transport-related agencies and better coordinate such efforts between the national and local levels,” NEDA Director General Ernesto Pernia said in a statement on Wednesday, June 28.

NEDA said the implementing rules and regulations (IRR) of the policy “has yet to be formulated.”

“The government assures the people that the problem of congestion on the roads is still being prioritized. The NTP is a priority strategy reflected in the Philippine Development Plan 2017-2022, as we seek to provide accessible social services through better connectivity,” Pernia said.

The 11 projects that will now be rolled out by their implementing agencies are the following:

This first phase of the 830-kilometer Mindanao Railway Project loop will be implemented by the Department of Transportation (DOTr) through local financing. This phase involves the establishment of a 102.28-kilometer commuter railway from Tagum City in Davao del Norte to Digos City in Davao del Sur.

NEDA said the project is expected to be operational by 2020 should the DOTr fast-track the right-of-way acquisition.

Also to be implemented by the DOTr, this project will be financed by the Japan International Cooperation Agency. (READ: PH’s longest railway to get funding from Japan, possibly China)

This project involves the construction of a commuter line and airport express railway between Malolos and Clark Green City through Clark International Airport.

The Department of Public Works and Highways (DPWH) will implement the flood risk management deal through ODA financing.

It is set to benefit around 8,000 households and 50 industrial firms. NEDA said the project is expected to be completed by April 2024.

The project aims to build an 82,600-square-meter terminal building, having a design capacity of 8 million passengers per year. The expansion project is expected to be completed by 2019.

Conglomerates Megawide Construction Corporation and Filinvest Development Corporation had earlier expressed interest in the deal. But the DOTr had decided to push through with the expansion via local financing instead. (READ: DOTr won’t auction off Clark airport rehab)

This project will be implemented by the Department of Education (DepEd) via ODA funding.

It will develop institutional capacity and strengthen critical systems essential for improving equitable access to and the quality of educational services in the primary grade levels (K-3) in the Autonomous Region in Muslim Mindanao (ARMM). The program implementation will be from July 2017 to 2026.

This is being pursued by NEDA, the Department of Trade and Industry (DTI), and Civil Service Commission (CSC) through ODA funding.

NEDA said the project will provide a successor program to the Philippines-Australia Human Resource and Organizational Development Facility (PAHRODF). It aims to retain the human resources and organizational development benefits brought by PAHRODF. The program will run from September 2017 to 2025.

This project will be done through a 30-month loan validity extension and reallocation of DOTr funds through ODA financing.

NEDA said this involves two components: construction of an air traffic management automation (ATM) system and construction of the Manila ATM Center Building in Pasay City near the Ninoy Aquino International Airport (NAIA), as well as the installation of communications equipment and surveillance equipment in 4 radar sites (Tagaytay, Palawan, Zamboanga, and Davao).

“It will improve safety, reliability, and efficiency of the air traffic system in the country. The project is expected to be completed by 2019,” NEDA said.

Through local financing, it “will deliver the required level of service for up to 1.28 million passengers per day,” said NEDA. Its target completion date is April 2019.

The NEDA Board approved changes in scope, cost, and financing arrangements for the DPWH-led project. This will now be implemented through ODA financing, not PPP.

The project aims to complete the remaining segments of the Plaridel Bypass Road “to alleviate the perennial traffic congestion at the interconnection point of the North Luzon Expressway with the Daang Maharlika Highway,” NEDA said.

The total project cost increased to P4.62 billion from P3.34 billion. It is expected to be completed by 2019.

This project will be implemented by the Metropolitan Waterworks and Sewerage System (MWSS). Its funding source changed to ODA from PPP, lowering the total project cost to P10.86 billion from P18.72 billion.

The project will increase Metro Manila’s raw water supply and ensure water security, as it involves the construction of an additional supply source of 600 million liters per day. It is expected to be completed in two years.

The NEDA Board approved changes in the mode of financing of the National Irrigation Administration (NIA)-led project. It will now be funded through ODA, from the initial plan of local financing.

With an implementation period of 3 years, this project is seen to provide irrigation water supply to around 8,700 hectares of farmland and will benefit around 4,350 farmers.

“This will allow the NIA to tap a grant/technical assistance in order to comply with NEDA Board’s instruction last year to reconfigure the project design … to include a hydropower energy component.” (READ: Locals protest Duterte admin’s Chico River project)

‘There will be delays’

Sought for comment, Rene Santiago, president of infrastructure consultancy Bellwether Advisory Incorporated, said there will “definitely” be delays in some infrastructure projects because of the changes in financing mode.

“Definitely, there will be delays – especially on those projects already in the pipeline for tender, such as the regional airports, and the Tutuban-Malolos Commuter Railway,” Santiago told Rappler in an email.

The transportation expert added that funding projects through ODA is not exactly shorter than PPP, as lending agencies impose their own protocols. (READ: Addressing myths of PPPs)

“For example, the Tutuban-Malolos Commuter Rail will be funded by JICA (loan agreement signed during former president Benigno Aquino III’s time). It has already commissioned detailed engineering works prior to tender. But the new administration changed the tracks from narrow gauge to standard gauge and wanted a combined pax-cargo railway system,” Santiago said.

“That single change would effectively delay the project by a minimum of two years. I do not expect completion before [the] end of [the] Duterte administration,” he added.

NEDA had earlier said that about 66% of the government’s medium-term infrastructure program will be financed by government funds, with the remaining being split between overseas long-term loans and PPP contracts. – Rappler.com