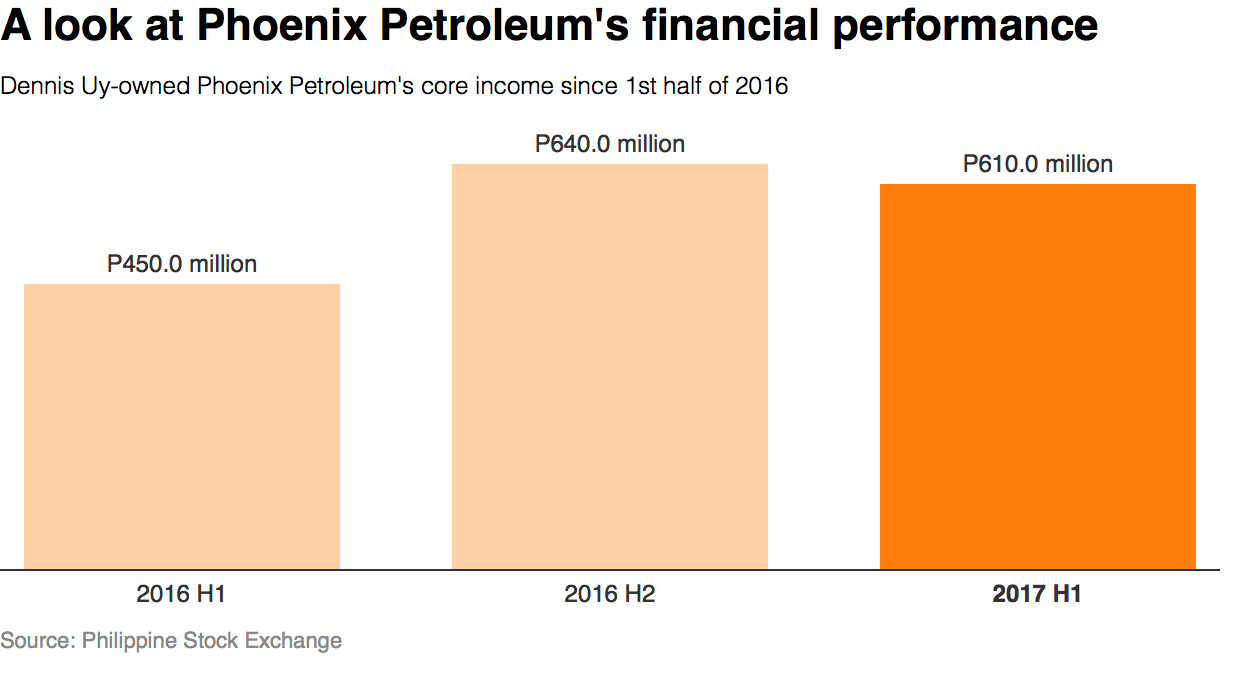 MANILA, Philippines – Lifted by strong performance of its core business, Phoenix Petroleum Philippines saw its core income jump by 35% in the first half of 2017 to P610 million from P450 million in the same period last year.

The oil firm’s strong performance was brought about by the 24% increase in revenues from its core petroleum business, which ended at P18.9 billion in the 1st 6 months of 2017.

Including subsidiaries Chelsea Shipping Corporation and Phoenix Petroterminals and Industrial Park Corporation, which were divested in November 2016 and have since been deconsolidated, revenues and net income increased 24% and 8%, respectively.

Dennis Uy-owned Phoenix Petroleum has put up 518 retail service stations nationwide during the 1st half of the year.

“We will continue to sustain the growth momentum of our company as we expand our retail, commercial, lubricants, and LPG businesses, drive operational excellence, and acquire companies,” said Phoenix Petroleum president and chief executive officer Dennis Uy.

Phoenix Petroleum secured approval from the Philippine Competition Commission last August 3 and is expecting to close the transaction in the same month.

The acquisition of PEPI will be a strong growth and value driver for Phoenix Petroleum, as it continues to expand its presence in the petroleum industry.

It will be consolidated into the oil firm beginning August and is expected to be already accretive to earnings by end 2017.

PEPI is principally engaged in the LPG business in the Philippines, particularly in the Visayas and Mindanao regions.

Upon completion, Phoenix Petroleum becomes a more diversified petroleum company with an enhanced product mix and a more robust platform for growth. – Rappler.com