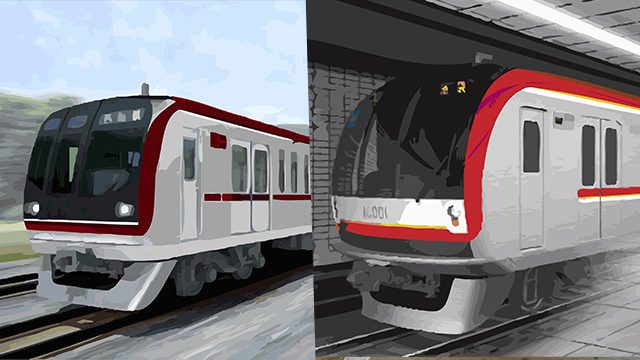 MANILA, Philippines (UPDATED) – The country’s first subway and the soon-to-be longest mass railway transit are ready to be launched, after President Rodrigo Duterte gave the go signal to implement these projects.

All these 3 big-ticket projects – cumulatively worth P643.25 billion – will be funded via official development assistance (ODA) from either China or Japan.

The bold plan outlined a program towards 2030 for sustainable development for Metro Manila, Central Luzon, and Calabarzon that would require P2.61 trillion ($65.3 billion) in investment.

Funded by a loan from JICA, the planned subway will run from Mindanao Avenue in Quezon City to the Ninoy Aquino International Airport in Pasay City.

The DOTr said the loan will have an interest of 0.10% per annum payable in 40 years, with a grace period of 12 years. (READ: Tokyo Metro: It’s time to build a subway in PH)

The signing of the loan agreement is expected in November when Japanese Prime Minister Shinzo Abe meets with President Rodrigo Duterte during the ASEAN Summit.

The groundbreaking of the subway project is currently set for the 4th quarter of 2018, while the target completion is by 2025, the DOTr said. It is expected to have a daily ridership of over 300,000 in its 1st year and will cut travel time between Manila and Calamba by more than half, reducing it from over two hours to under one once the railway is fully operational, government data showed.

The PNR South Commuter Line will be a dual-track, electrified, standard-gauge railway with elevated, at-grade, and depressed sections.

Its extension, the PNR South Long Haul Line, will be funded via ODA from China.

The PNR South Long Haul Line is a 581-kilometer, standard-gauge railway from Manila to Legazpi, Matnog, and Batangas City.

It involves the complete reconstruction of the legacy PNR railway into a single-track (initial), at-grade railway. The railway is seen to connect cities, international seaports, and economic zones.

Other projects that were also approved are the P5.97-billion Binondo-Intramuros and Estrella-Pantaleon Bridges Construction Project, the P3.5-billion Lower Agno River Irrigation System Improvement Project, the Infrastructure Preparation and Innovation Facility of the finance department, and the P21.19-billion improved growth corridors of the Mindanao Road Sector Project.

The Mindanao Road Sector Project involves upgrading of 7 roads and the widening of a 40-kilometer road segment with slope protection. Construction is set to begin late this year and end in the 4th quarter of 2020.

Meanwhile, implemented by the National Irrigation Administration (NIA), the Lower Agno River Irrigation System Improvement deal involves the development of a 12,650-hectare service area that will benefit 10,372 farmers in 7 municipalities in Pangasinan, Nueva Ecija, and Tarlac.

The project will be funded by the national government, and will be implemented from January 2018 to December 2021.

The Infrastructure Preparation and Innovation Facility will directly support the public works and highways department and transportation department in delivering more effective infrastructure projects by accelerating the approval process and ensuring timely procurement and implementation. – Rappler.com