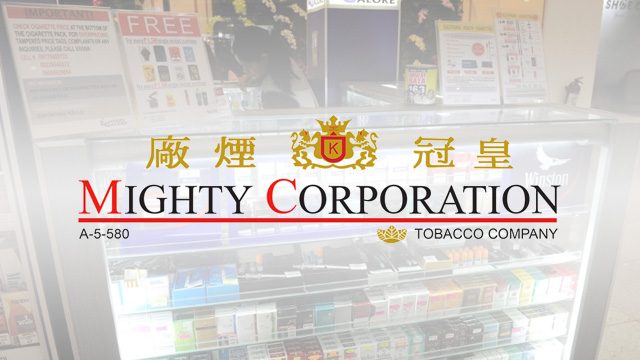 MANILA, Philippines (UPDATED) – The Philippines said Friday it has dropped a tax evasion case against the country’s number-two cigarette manufacturer after it was sold to Japan Tobacco to raise funds for a record 30 billion-peso ($586 million) settlement.

Manila had accused Mighty Corp of using counterfeit tax stamps to avoid paying 37.88 billion pesos in taxes, and threatened it with criminal charges.

However in July, President Rodrigo Duterte ordered the finance department to accept a settlement, under which Mighty, which has 23% of the local cigarette market, would drop out of the tobacco business.

“We could consider this case as closed. (The) government of the Philippines is 40 billion pesos richer,” Justice Secretary Vitaliano Aguirre told reporters.

The company settled the case with a P30 billion payment, and paid another P10 billion in taxes and penalties, he explained.

Presidential Spokesperson Ernesto Abella said on Saturday, October 7, that the settlement – which according to him is the largest in Philippine history – “will go a long way in funding the Duterte administration’s infrastructure program.”

Abella is referring to Duterte’s “Build, Build, Build” program which has been allotted P1.097 trillion or almost a third of the P3.77-trillion proposed 2018 national budget.

“The President will be relentless in his campaign against corruption and delinquent taxpayers, haling violators to court, if necessary. As citizens cooperate, we build a comfortable life for all. Strong political will to benefit all, and not just a few, should be the trademark of the entire government,” Abella said.

The company sold off its assets to Japan Tobacco International in order to meet its tax deficiencies, the finance department said earlier.

The Japanese firm, one of the world’s biggest tobacco companies, whose global brands include Winston and Camel, announced on August 22 that it was purchasing Mighty for 46.8 billion pesos.

Asked to comment on the justice department decision, a Japan Tobacco spokesman in Japan said “the tax liability is an issue that should be solved appropriately between Mighty Corp and the Philippine government”. – With reports from Agence France Presse/Rappler.com