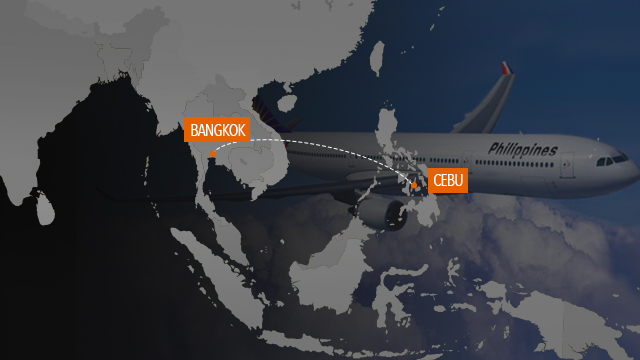 MANILA, Philippines – Cebu’s development as an international hub is getting a further boost with the announcement of a new Philippine Airlines (PAL) direct route from the city to Thailand’s capital of Bangkok.

PAL said in a statement on Monday, October 9, that amid “public demand,” it would begin nonstop, roundtrip flights from Cebu to Bangkok thrice weekly, starting December 2. The flight duration is 3 hours and 45 minutes.

The outward flight, PR578 (CEB-BKK), leaves Mactan, Cebu at 9:25 pm every Tuesday, Thursday, and Saturday, and arrives at Bangkok’s Suvarnabhumi Airport at 12:10 am local time.

Return flight PR579 (BKK-CEB) leaves Bangkok at 1:30 am local time every Wednesday, Friday, and Sunday, and touches down at 6:15 am.

PAL said it will use its 199-seater Airbus A321 which offers Business, Premium Economy, and Economy classes as well as free baggage allowance, Wi-Fi, inflight entertainment, and new inflight meals.

The MCIA has seen an increase in international routes this year, particularly from China, with Air China and XiamenAir both adding direct routes between China and the Queen City of the South. – Rappler.com