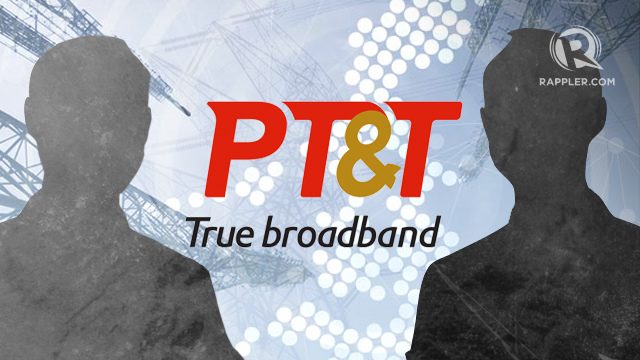 Facebook Twitter Copy URL
Copied
In a disclosure to the Philippine Stock Exchange on Friday, October 13, in response to news reports, PT&T confirms 'it intends to regain its status as a major telecommunications force in the Philippines and expand its present fixed broadband business across the country'

MANILA, Philippines— The new owners of listed Philippine Telegraph & Telephone Corporation (PT&T), the firm being touted as the likely 3rd player in the country’s telecommunications sector, have revealed their plans to get there.

In a disclosure to the Philippine Stock Exchange on Friday, October 13, in response to news reports, PT&T confirmed “it intends to regain its status as a major telecommunications force in the Philippines and expand its present fixed broadband business across the country.”

The firm further confirmed that “it is looking for a strategic partner, possibly foreign, with regard to said expansion plans” and that “the firm is preparing itself for future talks.”

Trading on the firm’s shares however is currently suspended as it owes various creditors around P12 billion. PT&T announced a rehabilitation plan to lift the suspension and said it is currently holding talks its creditors.

PT&T noted that lifting the 13-year suspension of trading of its shares will allow the entry of strategic partners and that “barring any unforeseen delay, it intends to complete the rehabilitation plan by next year.”

“[PT&T] intends to expand our existing businesses across the country. For this purpose, the firm will set up a nationwide fixed broadband network and is looking at entering into agreements with various government agencies to help achieve this.”

Broadband’s penetration rate in the country is currently only between 14-16% while the 55-year old PT&T currently holds an estimated 500 kilometer fiber optic network throughout Metro Manila and the provinces.

One possible partner is state-run firm National Transmission Corporation (TransCo), who said that PT&T wrote to them signifying its interest to enter into a lease agreement with the firm.

Earlier this month, TransCo, which controls the cables that underpin the country’s power transmission system, said that it plans to diversify into telecommunications as a natural step and will petition congress to amend its charter.

For its part, PTT was non-committal saying that “it cannot speak on behalf of TransCo and its management plans.”

Control of PT&T was taken over by Business magnates Salvador “Buddy” Zamora II and Benjamin “Benjie” Bitanga through their private investment firm Menlo Capital Corporation which acquired 70% of PT&T.

Zamora is now PT&T’s chairman while Bitanga serves as President and CEO after its board approved the resignations of directors Jose Luis Santiago, Lucie Bantolino, and Maureen Santiago.

Miguel Bitanga is a co-owner of Dolphin Fire Group, an investment house owned by Menlo Capital Corporation. Dolphin Fire has a stake in Rappler. MRC Allied director Bernard Rabanzo is one of the largest shareholders in Dolphin Fire. — Rappler.com