Philippine GDP grows faster than expected by 7% in Q3 2017 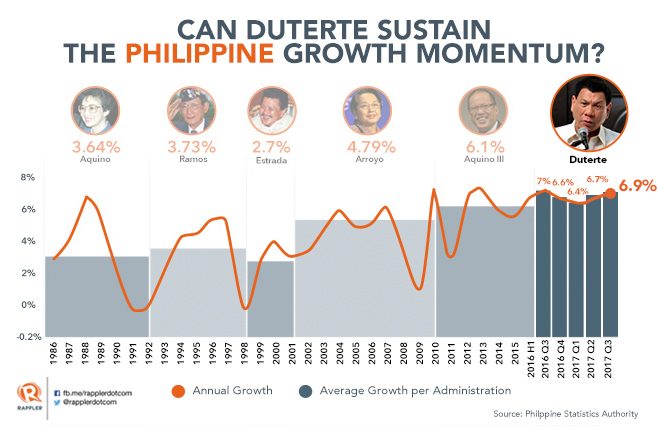 MANILA, Philippines (4th UPDATE) – Even if government spending and the agriculture sector slowed down, the country’s gross domestic product (GDP) grew faster than expected by 7% in the 3rd quarter of 2017, the fastest in the last 4 quarters.

The Philippine Statistics Authority (PSA) announced on Friday, January 19, that it has revised the 3rd quarter GDP growth from 6.9% – the figure initially announced last November – to 7%.

The faster-than-expected growth was driven by strong exports, industrial output, and the services sector, Pernia said.

The Philippines’ July-to-September growth is faster than the 6.7% growth in April-to-June, but lower than the 7.1% in the 3rd quarter of 2016.

The 3rd quarter GDP figure also surpassed the expectations of most economists.

Based on Bloomberg and Reuters polls, the median projection was a 6.5% GDP growth in the 3rd quarter of the year.

Finance Secretary Carlos Dominguez III said he sees a better growth narrative for the Philippines in the succeeding quarters, as the administration further ramps up spending on infrastructure and human capital development.

“Notwithstanding the continued political noise and the terrorist activity in Marawi, which President Duterte had decisively addressed, the economy managed to perform well,” Dominguez said.

A further look into the different components of the economy shows mixed signals.

The economy remains dependent on the services sector, and increasingly on industry, with both expanding at 7.1% and 7.5%, respectively.

The PSA noted that the manufacturing sector contributed the most to the quarter’s growth with a 9.4% year-on-year growth. Radio, television and communication equipment, along with chemicals and chemical products, accounted for its hefty 2.6 percentage points to the overall GDP figure.

This tied in with a resurgent export sector. Net exports contributed 1.2 percentage points during the quarter.

“Our net exports grew very fast during the 3rd quarter, and improvement in public spending which then boosted the manufacturing sector and the services sector,” Pernia said.

A weaker peso, which has remained above the P50 to $1 mark for months now, made Philippine exports more competitive.

“A more competitive currency is clearly good for growth. If we want to catch up with ASEAN per capita we need to import more capital equipment which means more US dollar demand,” noted Bank of the Philippine Islands (BPI) lead economist Emilio Neri Jr.

A weaker peso was supposed to be a boon to remittances. The peso equivalent of funds sent home by Filipinos abroad becomes worth more, fueling more consumption.

However, consumption, one of the important legs of the Philippine economic growth, slowed down in the 3rd quarter. It only expanded by 4.5%. In the same period in 2016, it grew 7.5%.

“Given that OFWs have been coming home on account of the turmoil in the Middle East, you can expect it to have some impact on remittances,” Pernia said, referring to a factor beyond the officials’ control. The upward pressure from oil prices has not been of help.

Another significant contributor to economic growth in the past – construction activities of the private sector – also posted a decline.

While it carried the economy in the 1st quarter of 2017, its growth has now decreased for two consecutive quarters. It was more sedate at 5.1% in Q2 and further to 0.6% for Q3.

Pernia pinned his hopes on the private construction recovering with the government’s infrastructure program, which he noted “will open more opportunities for the private sector.”

The agriculture sector – a constant laggard but a crucial one since it remains a major employer – performed poorly. During the quarter, it sluggishly grew by 2.5% versus the previous quarter’s 6.3%.

The value of farm output growth in the July to September period was the slowest in 3 quarters, with the 1st and 2nd quarters registering 5.28% and 6.18%, respectively. (READ: Under Duterte, is PH economy in good hands?)

Latest data from the Department of Budget and Management (DBM) showed that although expenditures of the national government rose by 7% to P683.7 billion in the 3rd quarter of the year, the actual amount fell short by 14.7% from the programmed P801.1 billion for the period. – Rappler.com